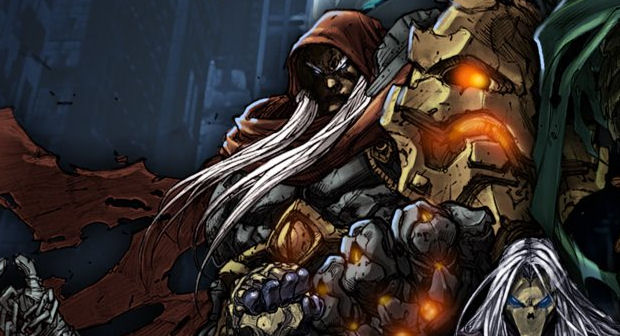 THQ has announced that the considerably epic Darksiders will be making its way to the PC this Summer. Previously available on the PS3 and Xbox 360, fans of keyboards and clickery will be able to step into War’s oversized boots in the near future. Hooray!

No price has been given yet, but the game is slated to arrive in June. THQ says that Vigil has optimized the game for PC, so you can expect it to look pretty damn sexy when it finally arrives. Hopefully worth waiting for.

If you’ve not played Darksiders yet, it comes highly recommended. I was very impressed when I reviewed it, and it’s still easily one of the best action games I’ve played in a long, long time. Definitely check it out on whatever platform you prefer.

Released earlier this year for Xbox 360® and Playstation®3, Darksiders will be available for PC gamers to enjoy in all of its apocalyptic glory this summer. Developed by THQ’s in-house studio Vigil Games™, this version of the game is being meticulously crafted to deliver the same great art style and dynamic game play to a whole new audience.

Travis Plane, Vice President of Global Brand Management commented, “We are delighted to be able to bring Darksiders to the PC. THQ is focused on bringing great product to the PC gaming audience so it was vital that we allowed Vigil the time to optimize the title for the PC platform. We hope PC gamers experience the same thrill and get the same level of satisfaction assuming the mantle of WAR as the console audience did.”

David Adams, General Manager of Vigil Games commented, “We are really excited to have the opportunity to bring Darksiders to the global PC audience. We feel that the growth of digital distribution and PC online communities creates a great environment for our game. We are working really hard to make sure that key features such as user-defined resolutions, interface and both keyboard and game pad control sets are all up to the standards for today’s discerning PC consumer.”

Deceived by the forces of evil into prematurely bringing about the end of mankind, WAR – the first Horseman of the Apocalypse – must return to Earth to search for the truth and punish those responsible. War must take on the forces of Heaven and Hell, forge uneasy alliances with the very demons he hunts, and journey across the ravaged remains of the Earth on his quest for vengeance. Players harness the apocalyptic power of War, combining brutal attacks and supernatural abilities to decimate enemies who stand in his way. With an extreme arsenal of weapons, War blazes a trail of destruction, and emerges even more deadly atop Ruin, War’s fiery phantom steed. Darksiders is now available for Xbox 360 and PlayStation 3. For more information, please visit www.darksiders.com.