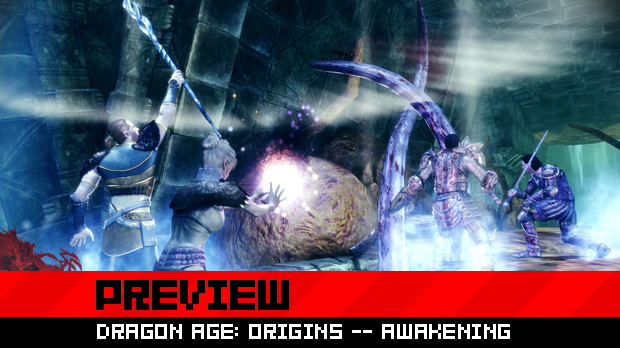 Spoiler: At the end of Dragon Age: Origins, the Blight was destroyed. Despite its destruction, the Darkspawn remain, and something is different about them. The Darkspawn are becoming sentient — they’re able to communicate, and they’re getting organized to do all sorts of evil stuff.

Never fear though, as the hero of Origins is back, and he’s ready to kick some medieval ass. Or, if you’re sick of your Origins character, you can play as a completely new hero, coming into this war with a fresh and unique perspective on all the events that have unfolded thus far.

The choice is yours, and you can find out just what’s brewing in Dragon Age: Origins — Awakening after the break.

Dragon Age fans need not worry about Awakening. This expansion is more of what you loved about Origins; it’s building on the strengths of what was already a solid game. There are no new over-the-top-features, however, but expect some minor tweaks such as improved level art and slightly better graphics.

The strongest aspect of Dragon Age is its story, and the same writing team has returned for Awakening. Players will be able to import their character from the original game, whether you’ve completed Origins’ story or not. And if your Origins character is already maxed out with abilities, you will be able to reinvest in that character, and get loaded up on different skills. BioWare tells us the level cap has been raised to 35, but as the developer is still working on balance issues, that may change.

Dragon Age is all about giving players choices, so you’ll be able to create a brand new hero that will give you a new outlook on the world of Dragon Age. The new character is a Grey Warden from the neighboring country of Orlais, and he has been tasked to rebuild the Order of the Wardens in Amaranthine (where Awakening takes place) as the Order was left in shambles by the Blight.

Playing with the new hero will feel pretty different compared to the heroes of Origins. Everyone in-game knows who the hero of the first game is, and the people in Awakening will give him the respect he has earned. Playing as the new Grey Warden character, however, will get you an opposite effect from the people of Amaranthine. The Grey Wardens of Orlais invaded Amaranthine in the past, and people are naturally distrusting of this strange newcomer.

In my hands-on time with the game, I played as the new Grey Warden, Velanna and Anders. The preview build was about six hours into the game, and I found myself in a dungeon where some Darkspawn creatures were ganging up on a female warrior. After my team saved her, she tells of how her group of warriors were obliterated when they tried to invade the castle the Darkspawn are holed up in nearby. You’re given the choice to bring her to your team, but seeing as how this was literally the first time I ever played Dragon Age, I made the mistake of leaving her behind and went on my merry way.

Needless to say, it wasn’t long into my playthrough that I found myself getting my ass handed to me over and over again. Thankfully, lead designer Ferret Baudoin showed me some tricks, and I got pretty far into the preview section. I ended up sticking with the mage, Anders, as his ability to heal my partners came a long way. The AI is pretty capable on its own, so as the Grey Warden and Velanna went hand-to-hand with the enemies, I hung in the background unleashing projectile attacks and healing spells.

Playing as Andres gave me a chance to try out two of the 50 new spells in Awakening. “Draining Aura” does as the name implies, but also drains a significant amount of your own mana. “Hand of Winter” freezes all nearby enemies, and lets you inflict some cheap shots into your enemies.

Along with the new spells you’ll also be getting 60 new specializations, 500 new items, weapons, and armor, as well as two new tiers of items. Plus, you’ll be able to craft your own runes and equip them into your armor now, opening up a seemingly unlimited amount of ways to customize your team.

Further into the level I came across the new enemies called The Children — gross little monsters that give the creatures of Dead Space a run for their money. They typically attack in groups of their own kind, and can pin down heroes until they’re knocked away by an ally. After dealing with The Children, my heroes stormed the front entrance of the Darkspawn castle and died. A lot.

Remember that female warrior I didn’t add to my party? Yeah, she would have been a lot of help here. I restarted the preview at this point, made sure to add her to my group, and we invaded the fortress from a secret passage instead of the front entrance. The main trouble of going through the front door was the six or so Stone Golems near the entrance, along with the dozen-plus Darkspawn warriors. Only one Golem is activated at a time, but they’re pretty hard to defeat, and take their toll on your team. Coming from the secret entrance allows you to bypass all the earlier troubles and come face-to-face immediately with the Golem master. Defeating him gives you gives you a nice bonus — the ability to control one Golem creature.

Coming into Awakening with no experience isn’t ideal obviously, but my time with the game was enjoyable, and I can see fans of the first game easily liking the expansion. The formula is kept the same, but a ton of new content is added, and the story should hook you in. In terms of length, the team can’t really put a number on it. People have spent anywhere from “20 hours to 300 hours” in Origins, as the Dragon Age team put it, and Awakening should offer about the same.

One final thing to note is that the world of Dragon Age is changing dramatically by the time Awakening finishes. You’re right in the middle of those changes as they’re happening, and it will be interesting to see how this reflects in Dragon Age 2.

Dragon Age: Origins — Awakening will be released as a full retail game or as a download for $39.99 on March 16 for the PlayStation 3, Xbox 360 and PC. You will have to have the original game in order to play Awakening.

Also, there’s no sex in Awakening. Deal with it.