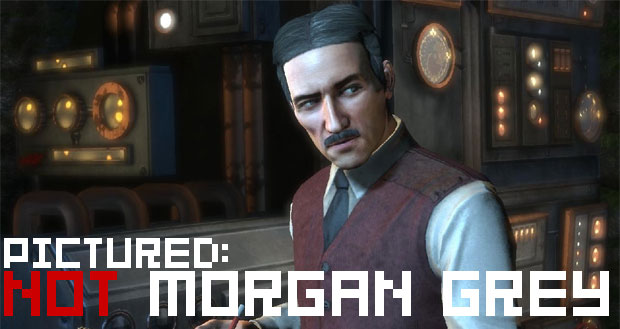 As of a few days ago, the only things that people seemed to know for certain about Capcom’s new IP, Dark Void, is that is has a guy with a jet pack, vertical platforming, and something to do with famous inventor Nikola Tesla. At least that’s all I knew for certain, seeing as any time I’ve previously seen the game it was all about the jet pack.

Not that anyone could possibly be against jet packs (this is the future after all), but there is something left to be desired as to the knowing exactly what type of game Capcom is trying to make. Although you’ll find out more about Dark Void from our preview, Destructoid did have the opportunity to interview Morgan Grey, Senior Producer on Dark Void, and ask him just what exactly is going on with the title.

Not only do we get a little insight into the game, but Morgan also shares some knowledge on what it’s like making a brand new IP from the ground up. He also addresses the vertigo inducing gameplay that has brought at least two Destructoid editors close to vomiting.

The weak of stomach need not apply.

DESTRUCTOID: Developing an IP from the ground up can be tough. How much of the original concept has made it to the finished product, and how much do you feel was left out?

Morgan Grey, Senior Producer at Capcom for Dark Void: Man, nice small question there! So, a lot of the original concept has made it into the game, but not in its original form. The original concept, funny enough, didn’t even have a jet pack. I think the concept of combining on-the-ground and in-air combat has made it through 1 to 1, and the mechanism that is the jet pack was a twist that came up along the way. Vertical combat was never in the original concept, and some of the plot points have made their way over.

I would say that 70% of the core from the original design is all in the game, but the “window dressing” or “wallpaper” on that core has done a night-to-day change from its first inception to where it’s at today.

Since it’s an original IP, were there a lot of obstacles to get over?

The tough thing about an original IP is that there is no road map of what’s come before to follow. There’s no canon. You’re sort of making canon as you’re going, so it’s really easy to go off the deep end and try and do too much.

I think for us the difficulty was it’s a new IP, it’s a new universe. We’re completely mixing gameplay styles that, although they’ve existed before, they haven’t existed in the kind of gumbo that we’re making in Dark Void. So not only was there no fictional road map, there wasn’t even a gameplay road map for the “fight on the ground, take to the sky” kind of gameplay. We didn’t even know how to build levels for a game like this, so there was a lot of initial stumbles and learning lessons, which is why the IP sort of changed form from our initial premise to where were at now. Because as we learned more, we had a clearer picture.

The cool thing that Japan and Inafune dropped on us early that helped was, if you look at most Western games, your character is more of a blank slate like Gordon Freeman or Master Chief. They’re cool characters, but they aren’t even really a character, right, because you never get to hear them talk much, they’re just there. If you look at Japanese games, there’s a shit load of time spent on the character.

It was finding that for a game like Dark Void. Having the player along for the ride with Will [main character], versus the player just being Will, was a big push and helped us make a stronger game, and what we ended up making is basically an “action romp.” It’s not really this dark and gritty tactical military shooter. I mean, it’s got a jet pack, how fucking hardcore can it be?

So you’re saying that there was some influence from Japan, but the game looks designed to appeal to mostly Western audiences.

Straight up. It’s a Western game: for Westerners, developed by Westerners. We’re dual-sticking it, which is not huge in Japan. It’s cover based shooter combat, also not big in Japan. It’s very much a Western focused action romp. And that’s sort of unique for Japanese publishers, Capcom is one of those publishers that knows that not every game is a global game. It’s not like America is ever going to go crazy over dating sims, right?

Okay, so I have to ask this question. Two of our writers have played Dark Void before, and they both said, especially with the vertical combat, that they got a lot of motion sickness. So my question is,  were there any reports from the testers in QA getting vertigo and throwing up or anything like that?

[Laughs] So all the testers seemed to be able to hang. I have found that when I’m playing the game and showing it off, and I’m not paying attention to the fact that I’m playing it on a giant 50 inch TV, it effects people. It was on the last day of CES, I think everyone was pretty ragged, when I thought I actually heard someone in the back make the “I’m about to puke” noise.

I always say that if we don’t make at least one person puke, we’ve failed. Because that’s our goal — we want the vertigo. That’s where the crazy lies and it’s rare that you walk by and see a game and go “What the hell is that?” And when you watch Dark Void, you go “What the hell?”

So, we’re rocking a steam-punk found item, a sort of Mad Max cobbled together survivor vibe, with Nikola Tesla, alien conspiracies, and jet packs where you fly in and punch someone. It’s pretty fucking metal.

Thanks for your time!