“We’re hoping thousands, tens of thousands, millions of deaths upon the player.” I’m sure that quote has just put a giant sadistic smile on all you Demon’s Souls fans. Hidetaka Miyazaki, the producer on the original, is leading development on the project once again along with the original team and he is really looking forward to all the cries of frustration, screams and yelling that will be brought on by the game.

Hidetaka Miyazaki began his presentation by reminding us that Dark Souls is a third-person dark fantasy action RPG. The game gives the player as many options as possible when it comes to conquering their enemies and missions. The combat focuses on highly strategic and tactical sword play with over 100 different types of swords that can be used. Each weapon has different ways they can be used too, including deciding which hand (or even both hands) you prefer to strike with.

Hidetaka continued about how they have created a highly explorable world. They want players to explore and there’s so many paths and areas to be found. There are even areas you can only come across if you get caught in one of the game’s many traps. 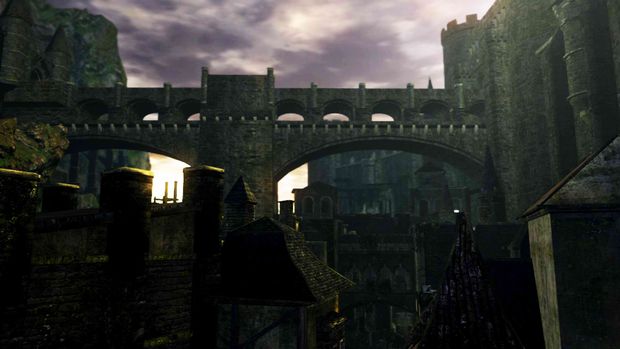 After the basic overview, Hidetaka began the live demo of the game at the start point where all players begin after completing the tutorial. The player went to a nearby castle where a giant dragon was sleeping on a bridge that was the only entrance to the castle. It’s easy to sneak by without waking the beast, so long as the fight with some undead soldiers nearby don’t wake the dragon.

Later on, the player is confronted with a mid-boss, a giant minotaur-like creature wielding a giant hammer. As the player was rushing to attack, arrows started hitting him in the back and the player needed to take out the undead shooting off the arrows first to stand a chance. The character climbed the tower with undead soldiers and for a few seconds, I thought the player was going to be okay as the giant minotaur wouldn’t be able to reach him. But then the giant beast actually jumped up on to the tower!

It was here that Hidetaka reiterated that Dark Souls is going to be a no walk in the park. “[There is] no existence of a safe place in Dark Souls. [Our] goal is to kill and defeat all players who think there is a safe zone in Dark Souls.” 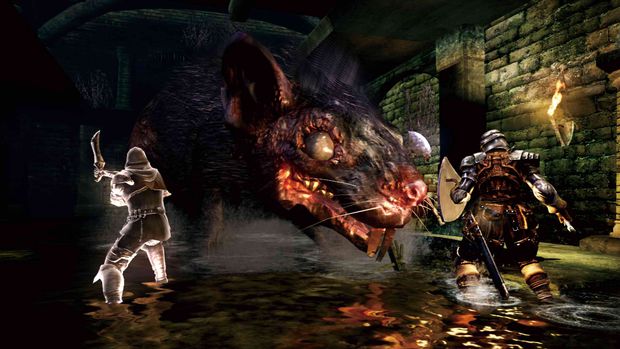 The player jumped off the tower to the ground below and equipped the Great Sword, a giant sword that, while slower to swing, has a bigger reach than the normal sword previously equipped with. The mid-boss jumped back down and the player went up the tower once again, but this time immediately jumped right back down driving the broad sword into the minotaur’s head. You’ll want to understand your environment and use it to your advantage like in this example.

From here, Hidetaka showed off a few other areas from the game. One was the “Dark Forest” where he hopes players get lost. Then they showed off “Underground Hell,” a level where there’s lava all around and some mean looking monsters all over. Both of these levels also featured two different knights. One was a pudgy knight that had a cute roll and the other was a demonic looking knight that wielded a long curved sword.

Finally, Hidetaka took us to a dungeon called “Trap Road” set in an ancient castle where your first step into the place causes a trap to go off. Some of the basic magic spells were shown off here, including one where the spell turned your entire body into iron. You can’t move as fast, but you take less damage while in this state. Another magic spell turned the player into a giant vase. Yes, a vase. Players can now transform into different objects and hide avoid enemies and even other players.

Demon’s Souls fans, you have plenty of amazing torture to look forward to later this year.