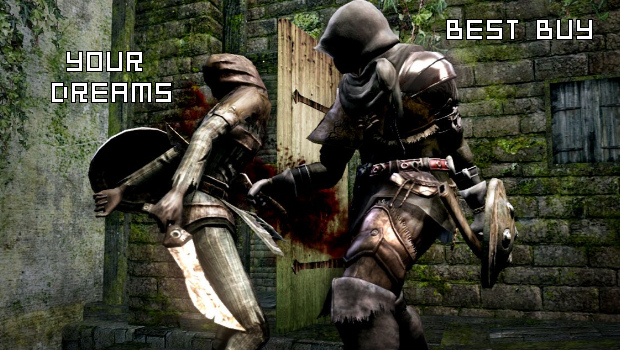 It would appear that Namco Bandai may have been a little too conservative with its sales estimates for Dark Souls (review coming soon!), allegations mount around the Internet of retailers overselling their stock. Best Buy, Newegg and Amazon have all reportedly disappointed customers by not having enough copies to meet demand.

One Destructoid reader was able to get a regular edition of the game at Best Buy, but he pre-ordered the limited version: “An employee searched around for a few minutes before presenting a company memo which stated that Best Buy had, according to Namco-Bandai, ‘oversold’ its limited editions of the game, and the games publisher decided that they would ship zero limited editions to Best Buy stores as a result. As compensation, Best Buy offered pre-order holders a $20 gift card if pre-order holders chose to buy the standard edition.”

Our own editor Jonathan Ross is not getting his copy from Amazon today, as the company didn’t have enough to ship on time. Newegg, which is dabbling in new game sales, allegedly did not get a single copy from Namco and had to cancel all its orders.

The veracity of these reports are likely impossible to determine, since different stores often say different things. In any case, we’re hearing quite a few complaints from around the country, seeming to suggest that Dark Souls is failing to supply an overtaxing demand.