Offering crisp visuals and twisted slaying scenes to boot, Dante’s Inferno can sicken the most iron-bellied players with its gore. The narrative content may also sicken most classical lit majors, but the game is what it is — a brawler that borrows concepts from Dante Alighieri’s epic poem. Check those story expectations at the door because from what we’ve seen thus far, this thing is nowhere close to exploring the nature of sin or faithfully following the author’s journey to the depths of Hell.

I recently got my hands on the title — still months from release — at Gen Con ’09. The statue of the game’s protagonist, Dante (no longer a poet, but a scythe-wielding and armored badass) standing tall in the booth was another indication that I was in for a nasty, visceral experience. I’ve seen the game once before, at E3 2009, and I’m glad I did: the playable build at Gen Con is the same build shown to press at the big industry event.

It starts in Limbo and runs through a snapshot of Gluttony. Read on for a walkthrough and my impressions from the PlayStation 3 demo. 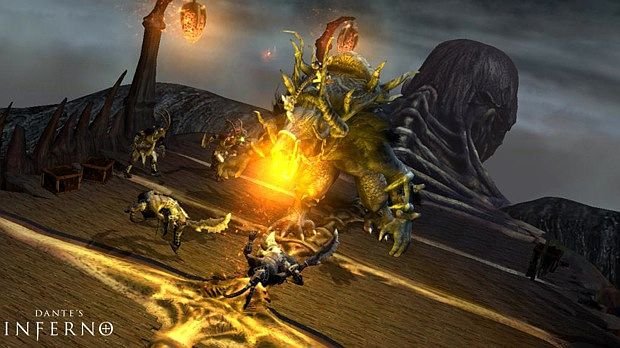 It opens. Dante stands on a dark boat suspended on top of a river of smoke. The sky is black and embers dance lazily across the screen, floating with the help of a ghastly wind. The head of his scythe is sharp, the curved blade longer than usual. Its extensive shaft is made of bone, a spinal cord, its thick collection of fist-sized discs claimed from some unknown beast. Skeletons and a Minotaur rise from the rock through fiery teleports, and I dispatch them.

The combat in Dante’s Inferno is straightforward. The face buttons give users control over three basic melee attacks, including one ranged attack stemming from Dante’s hidden crucifix weapon. As the skeletons and Minotaur circle, I start slicing them as a group, pushing back the closest, flowing from one foe to another with the help of the right stick and its evasion rolls and flips. The fluidity is astonishing, and I’m being rewarded with a combo meter. After a few seconds, only the Minotaur stands in my way. As I pound his health, an “R2” icon pops over his head. I press the button, climb on top of the beast and press the blade of my scythe across his thick neck. Prompted by the circle button, I tap relentlessly until Dante pushes the scythe through the meat, decapitating the creature as blood blasts from the wound.

Even though three hot-white daggers erupt from the crucifix, it is not magic. The demo doesn’t have magical attacks, but the game will. The blue bar that stretches underneath the green health bar, as well as the blue regeneration stations, reminds me of magic’s absence as I play.

The Minotaur dies his bloody death, and a massive beast with a skeleton rider stumbles into the frame. I jump and slice the creature in no particular place. As the combo meter fills, the rider eventually tumbles off the creature’s sculpted and horned shoulders. I’m prompted to climb on top of him and I do. 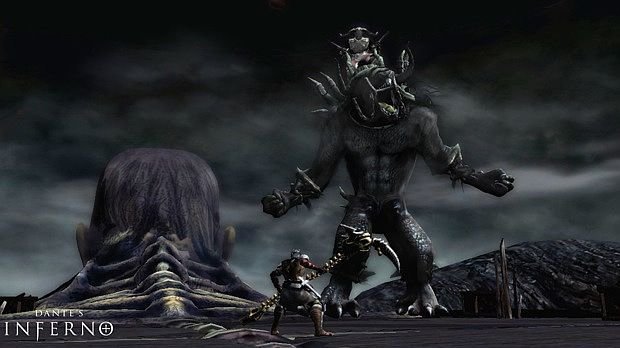 This creature is a tamable beast — not the first, and definitely not the last. You can ride and attack with them whenever they plod into battle. Lumbering and strong, the tamable beast offers a change of pace, and it also serves as a means of level progression.

With the beast, I walk to the bow of the organic boat. A brown and thick-muscled head gazing towards Hell sits on its end. A pink dot glows brightly, telling me that I can interact with the object. I press a button and the beast takes the head between its massive hands and claws and starts pulling. It rips the head off the wretched boat, and then I’m allowed to progress to two dark columns of rock — a cliff in Hell.

This scene is special. The camera pulls out and isolates the rock. With the press of a button, the beast leaps up the rock and attaches to it again. The screen shakes, and a chunk of rock sloughs off my column, plummeting towards its fate, perhaps eternally, at the bottom of Hell. I keep climbing the pillar. The screen shakes again, and I jump across the gap between the two pillars and grab on to the second. I do this a few more times, repeating this process, until I reach the face of the cliff. A QTE happens. I lose the beast, but I survive narrowly by attaching my chain weapon to the dark rock at the top. At this point, the entire structure begins crumbling. I run across a bridge as it breaks and meet the blue shade of Virgil.

“Beyond Limbo,” he says, “is the fallen King Minos, judge of the damned, but for those who remain in Limbo, the rest shall be sentenced to the floors below.”

For all the talk of narrative, Virgil seems to be a lesser character — nothing more than a guiding figure in the demo. 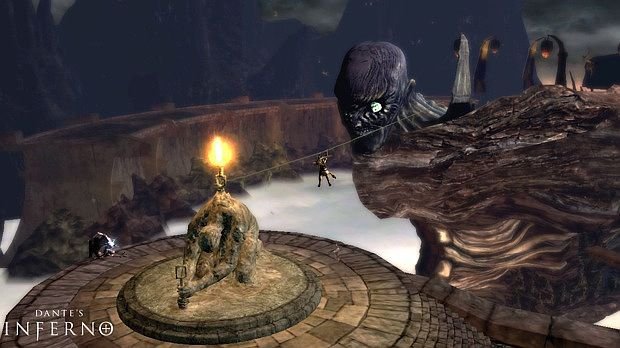 A collection of torches lights the way, their flames always flickering, their shadows long on the rock. I round a bend. Immediately below me are hundreds of squirming bodies. Heads writhing in pain, arms reaching out for mercy or help that will never be available to them. This is a vine, an object to climb down on. Before I use it to reach the floors below, I look to my right. Storm clouds, alight with a stream of lightning, float above the massive King Minos and his serpentine tail. He dwells in a broken coliseum, bonded to it in some terrible fusion of his flesh and its stone.

I climb down a few more levels and break a dotted rock’s crumbling stone to reach the entrance of Minos’ hybrid arena. I see his gargantuan face and his crown of bone. He has no eyes, nose or lips. He is nothing more than a skeleton with tendons and a ghastly sheen. The tendrils of tendon allow for howls of anguish. At the bottom of the arena, a curious spike-filled gear sits. Our fight begins.

He sends daggers of flesh through the rock and I run in circles to avoid them. Then Minos brings down his massive fists, shattering stone. He eventually misses me, and another “R2” icon hovers above a limp hand. I enter into a QTE, climb up his body with my weapons and jab the bone scythe straight into one of his hollow eye sockets. He screams, his mouth a void of blackness.

“You can’t repent your sins,” he cries as I spring from his face. He starts pounding the ground again. I’m prompted to hit a button, and I attach to the wall above the floor just before Minos lets out a wail full of poison. When he finishes, his outstretched head stays on the floor. I start slashing it madly, attempting to end the fight. His forked, purple tongue stretches across the arena. I leap towards it and press the button for the icon above it. A QTE. I take his tail and impale it on a spiked gear. I crank the lever on the side of it. The motion forces Minos’ head to the gear. His face meets with the spike and blood splashes on the screen as it rips in half. 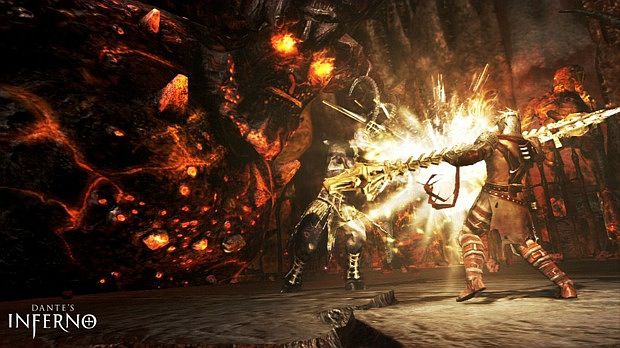 Beneath the gore and satisfaction lies a game that requires swift fingers. QTEs are plentiful, always highlighting major action elements. A missed button press is often death, but there’s a good checkpoint system. Rarely was I placed somewhere outside of the last QTE I attempted. While this is only a slice, I felt overwhelmed by the amount of fast-pressing events. I like QTEs to complement regular action, and I also want to believe that my protagonist is capable of great things while I’m controlling him. The Minos battle is an example of Visceral Games taking the fight out of my hands and placing it in a guided system. As cool as everything looked, I never really felt like I fought the foe; I was merely watching the action unfold.

The next few scenes fly by. I’m on top of a floating circle with spikes around the brim, suspended in a river of bubbling lava. Flying enemies attack, pouring out of statues’ mouths that dot the red and violent landscape. As I float, the platform is thrust into the air. I’m on no boat. I’m standing on a mammoth creature’s crown, and he wants no part of me. Another QTE. I swing across its back and onto a rocky cliff again. Enemies sprout as I continue towards some unknown goal. The monster stays in the frame, passing and bringing his massive fist down into the level erratically as I slay foes and decapitate Minotaurs.

Eventually, I meet a woman of Gluttony. Rotund and glistening, the women are nude and nasty; skin folds tumble down their short frames. Stringy hair compliments a face no mother could love because of its squashed, almost pig-like look. Their attack is a violent stream of puke.

After a scramble across a falling bridge, I meet another woman. I dispatch her and the cronies around her, and then I’m prompted to ride another tamable creature across a narrow bridge of rock. The camera slowly pans and Virgil’s voice comes, welcoming me to Gluttony. The demo is over.

I played on the “Easy” difficulty and died possibly 10-14 times over the course of three playthroughs — all QTE-related events. I also had a guy hovering over my shoulder as I kept pausing and scribbling notes. I blame half my deaths on that dude’s mouth-breathing.