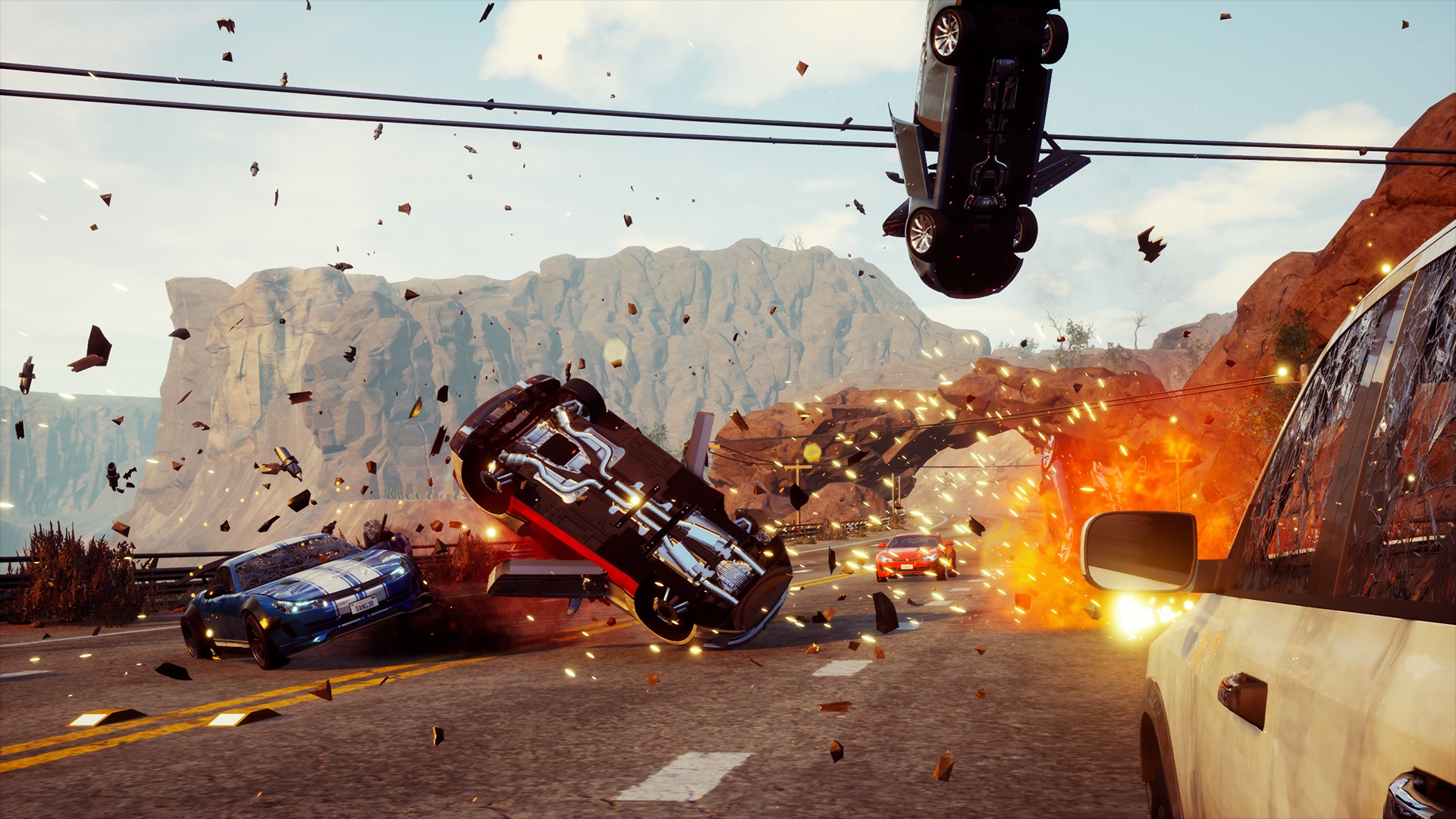 I hope so, at least

The once proud Burnout series is not likely to make a comeback anytime soon. EA may have released a remastered version of Burnout Paradise last year, but arcade racers seem to have fallen out of style with the general public. That’s a real crying shame because online play really livened up Burnout.

Thankfully, Three Fields Entertainment has been picking up the slack. An indie developer born from some of the original minds behind Burnout, Three Fields started its attempt at reviving arcade racers when it released Danger Zone in 2017. A little over a year later, Danger Zone 2 came out and expanded the scope of what that small team could do. While I think it stumbled in terms of general polish, it was easy to see that Three Fields was honing its craft before bringing us the real deal.

Now everything has come full circle. Dangerous Driving is almost a homage to the rest of the game modes that Burnout once had. Hot laps, rival races, police pursuits, road rage events: everything is here. One of the biggest features I thought was missing from Danger Zone, multiplayer, is even present. If Dangerous Driving doesn’t start an arcade racer revolution, then we really don’t deserve this genre. 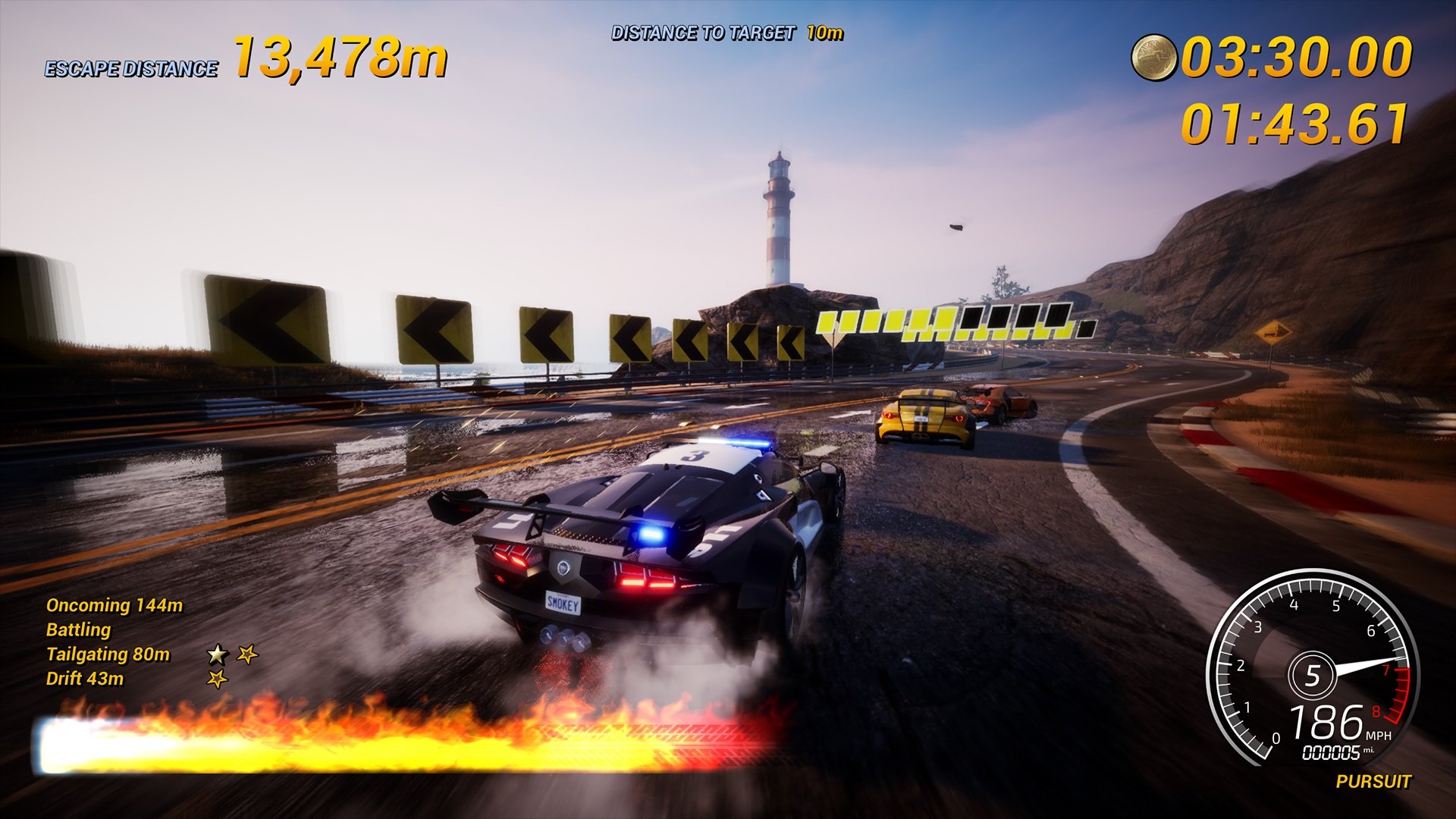 I had the chance to sit down with Alex Ward (co-founder of Criterion Games and Three Fields Entertainment) and Tara Bruno (Publicist working on Dangerous Driving) and play Dangerous Driving while chatting about some of the history behind Burnout and the struggles that a small indie studio has with living up to the incredible legacy that Criterion has left behind. While I stupidly didn’t take notes, a lot of what Alex said was so hilarious that I’ve basically had it etched in my mind since leaving PAX.

First, though, let’s talk about gameplay. I got a pretty big sample size of the events available in Dangerous Driving and it feels remarkably close to the Burnout of old. This latest game could be called a greatest hits of Burnout’s past, containing things like cop pursuits (Burnout 2), road rages (Burnout 3), and face-off challenges (Burnout). I was told there would be around 69 events present, so you’re not likely to blast through the campaign in a single sitting.

While local multiplayer isn’t on the cards, a new online multiplayer option will be present in Dangerous Driving. You can verse up to five other racers in online races to prove your mettle against the world. It’s one of the biggest requests I’ve had with Danger Zone, so I’m happy to finally see it come to fruition. It won’t be ready for launch but will be coming in a free update shortly after release. 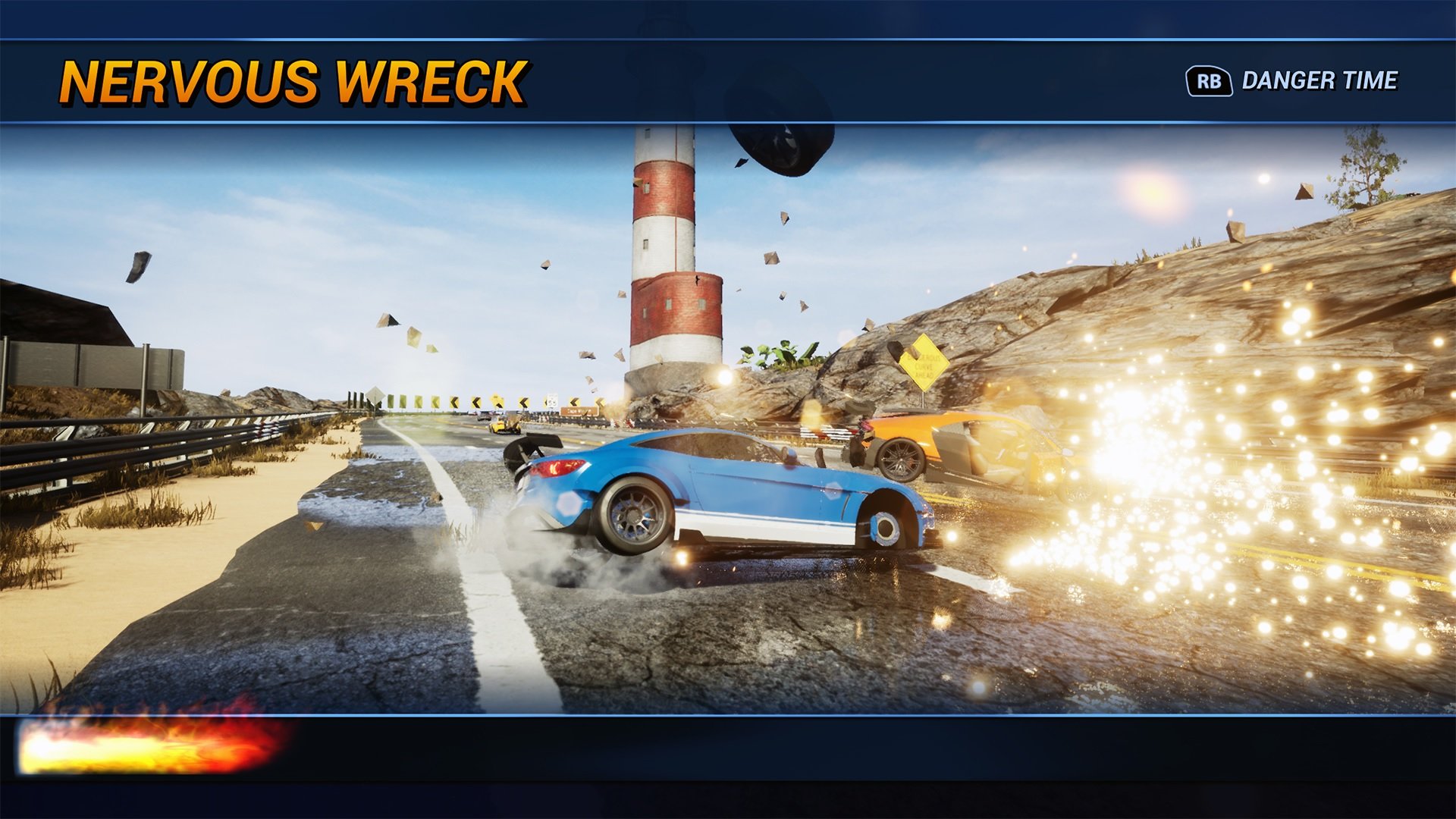 As well as that, some new additions to the Burnout formula are present. While you’ll still be taking down opponents like the good old days, any rival crashes you cause will remain on the track for the duration of the race. This leads to moments where you’ll be flying around a corner on the final lap and accidentally smash into your own handiwork if you’re being careless (a crash called “nervous wreck”). Opponents can also collide with their own debris, which awards you with a special takedown and extra boost.

What will likely be a major positive for some, traffic checking doesn’t seem to be here. I rammed into the back of a car during a hot lap and went flying through the sky. It took a few minutes to readjust since this was a feature from Burnout Revenge, but that change is more faithful to the spirit of the older games than later titles from Criterion. It also ups the danger factor present, which is likely the intention.

One of the other features not present in Dangerous Driving is the ability to step out of your car and fight other racers. Why this would even be in a Burnout-esque racer is beyond me, but Alex regaled me with the tale of a PAX patron asking him that very question. He didn’t say it as a joke, either, but was super serious after seeing the tagline of “Race, Fight, Compete.” I guess fisticuffs were the one feature that could have pushed Burnout over the edge… 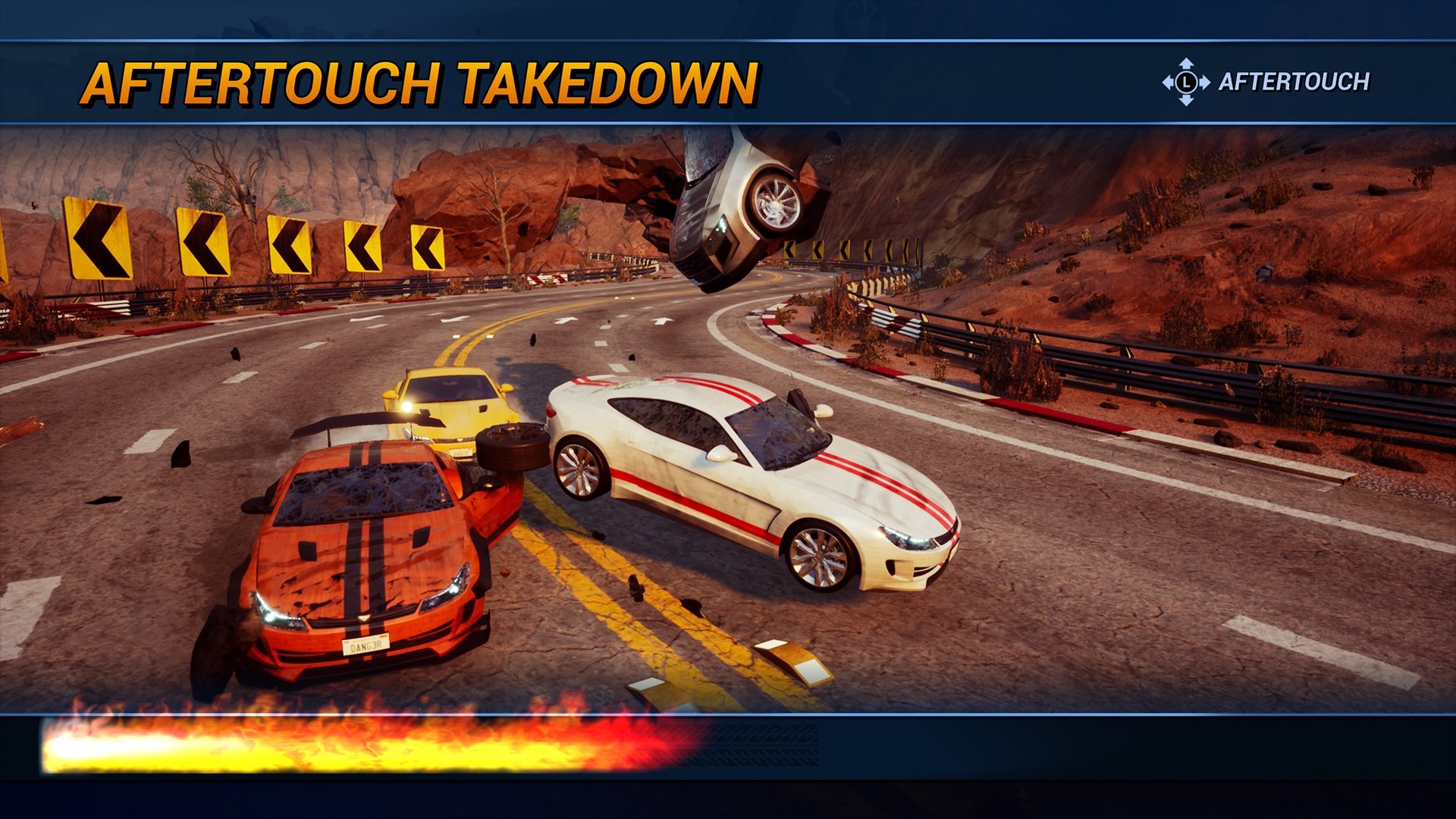 Alex mentioned that he agreed to show up to PAX since he wanted a chance to talk to hardcore Burnout fans. Dangerous Driving wasn’t originally scheduled to be at PAX, but Tara convinced him to make the trip so that the game could get some exposure. Despite myself and other outlets best efforts reviewing both Danger Zone games, Three Fields hasn’t really seen much success with either game. They didn’t break the bank, but their limited ambitions and scale have resulted in expectedly limited sales.

Alex then got to explaining how Three Fields is made up of only seven team members. As he pointed out, some people forget that a team of that scale cannot perfectly recreate a title like Burnout. Even the original Burnout was made with a larger team, but the most popular entry (Burnout 3) had a team of 90 members. 20 of those members were working on the submission process for each console version.

What Three Fields has achieved with both Danger Zone titles and Dangerous Driving is something that is pretty unthinkable in the indie space. These are relatively high-quality games with a blistering frame rate that are made in a matter of 9-11 months. Were you disappointed that the first Danger Zone had only a single environment and car? That’s because there wasn’t a budget for anything else. Alex explained that the team threw the game together because they wanted to do better, but had to do something to make ends meet. 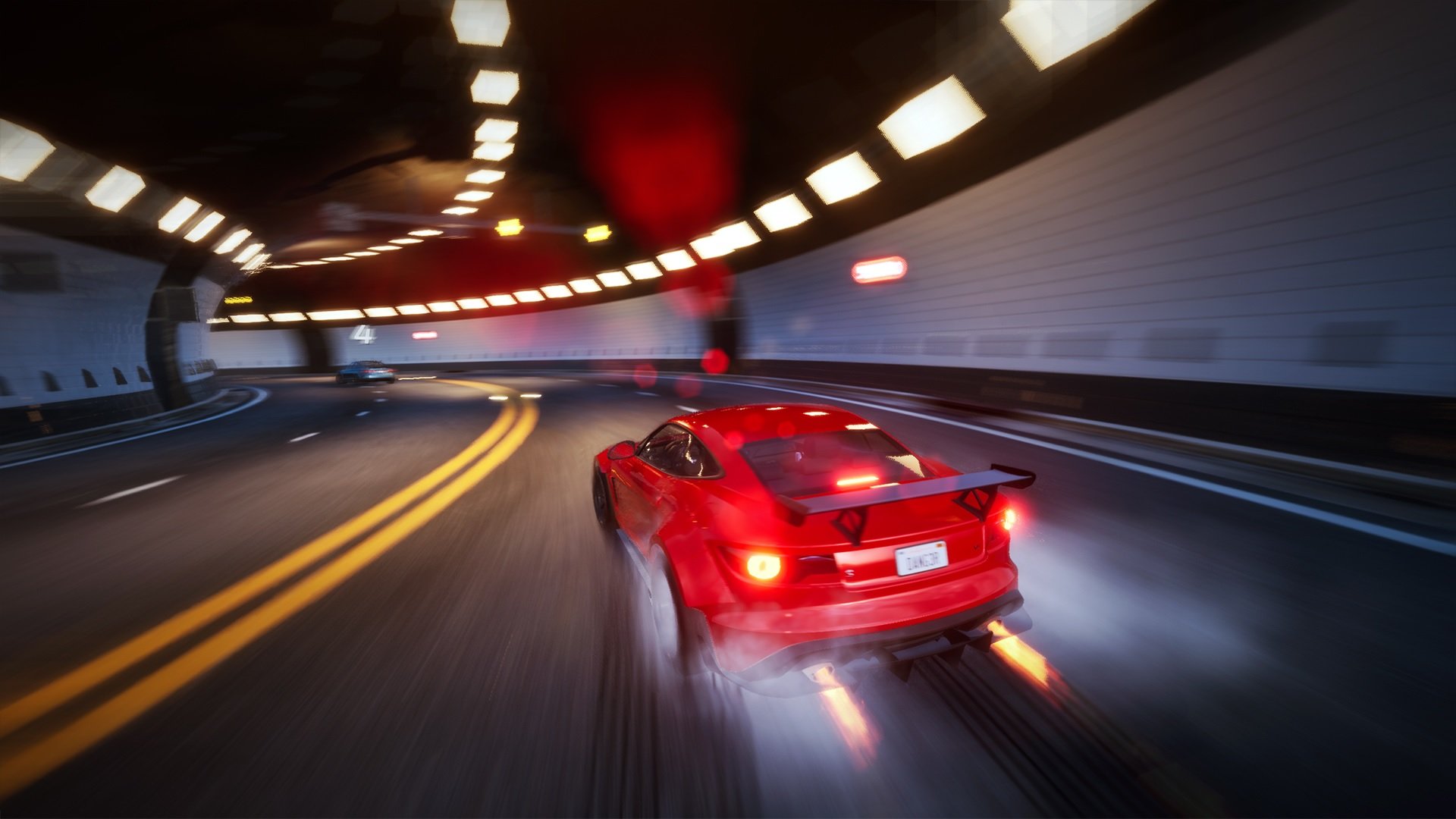 The sales from Danger Zone then directly funded Danger Zone 2, which was able to expand the concept beyond a single test zone. Now there were real life junctions, multiple vehicles, and more events. Even the critically panned Dangerous Golf played a role in getting the team to this point since it was their first project to utilize real-time physics that would later get incorporated into Danger Zone.

The efficiency of the team has grown exponentially with each successive title. Going way into the past, Alex told me of the time when Burnout 2 was shown off at E3. To get the single level ready for that event, it took Criterion a couple of months of work. With Danger Zone, Three Fields was able to build a near-complete build in the same time frame. This is a team of 40 versus a team of seven. That’s pretty damn impressive.

I may not have been too hot on Danger Zone 2, but even I have to appreciate how dedicated Alex and his team are. They are doing their best with the limited resources available to bring back a series we all love. Maybe my expectations were out of whack, but even I can see how far the team has come with Dangerous Driving. This one truly does feel like the Burnout of old. 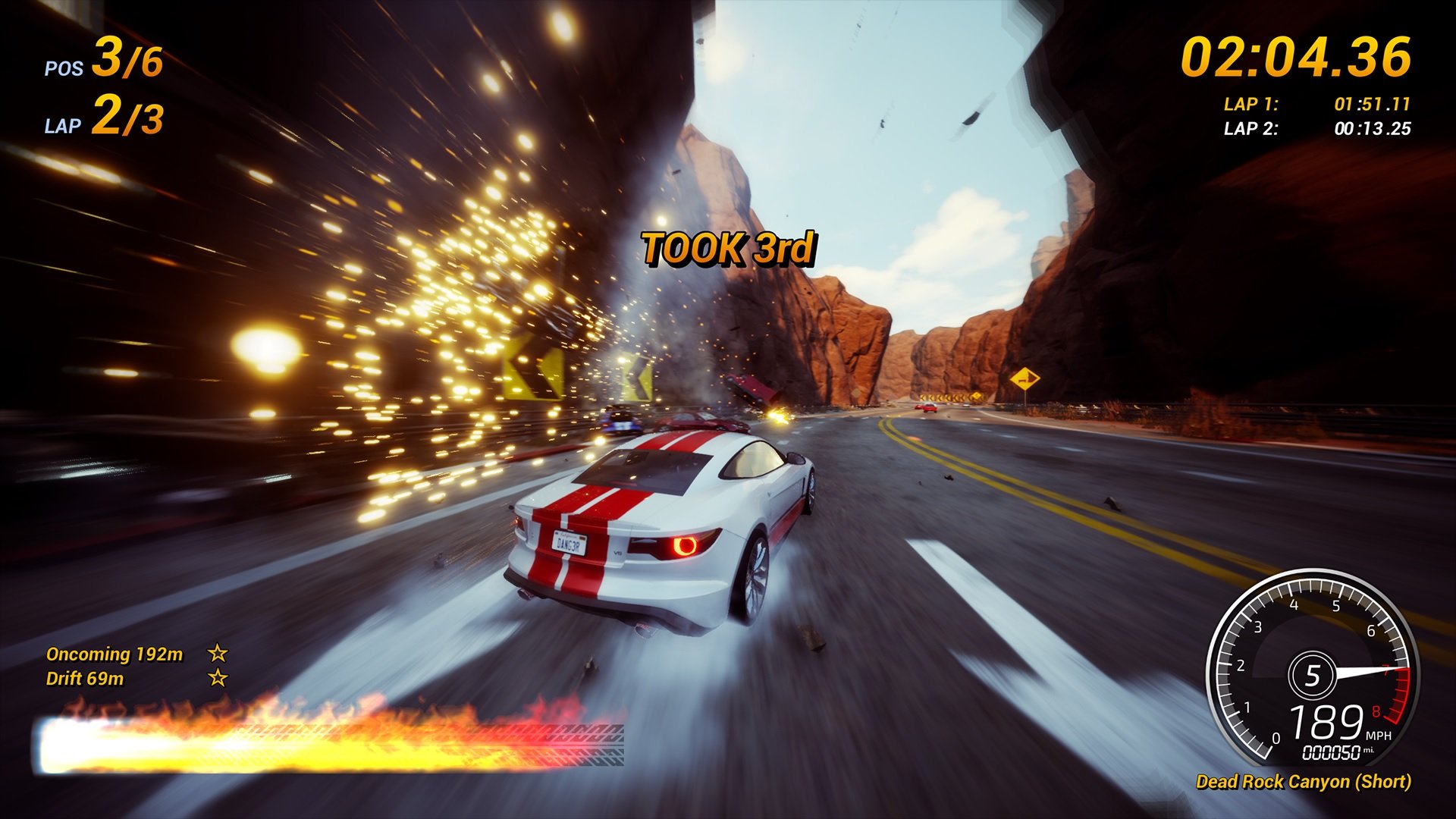 After playing, almost every attendee at PAX asked Alex the same two questions? “Can I pre-order this?” and “When does it release?” Much like me, they didn’t look at the 10 foot tall banner behind the television. I think that’s a testament to how awesome Dangerous Driving looked, but the game will be launching for PC (via the Epic Games Store), PS4, and Xbox One on April 9, 2019.

Pre-orders are now available from the official website and each platform’s respective digital stores. If you aren’t keen on downloading games, Dangerous Driving will be getting a physical release on PS4 and Xbox One. As a bonus, it will include Danger Zone 2 on the disc for $39.99. You really can’t beat that deal.