On their surface, it’s obvious that Dance Central‘s characters are colored by a wide range of dance genres and street styles. What might be less evident is that it’s just as likely that the characters have their roots in Street Fighter II as much as, say, the seminal dance film Breakin’ 2: Electric Boogaloo.

“A big influence on early character development and, to a degree, the venue design, was inspired by versus-style fighting games,” says Dance Central lead character artist Matt Perlot, who started his work at Harmonix designing rockers for Guitar Hero II five years ago. “Our ‘fighters’ are the dancers, but instead of cracking skulls, the ‘Dance Central’ crew are busy cut’n rugs.” 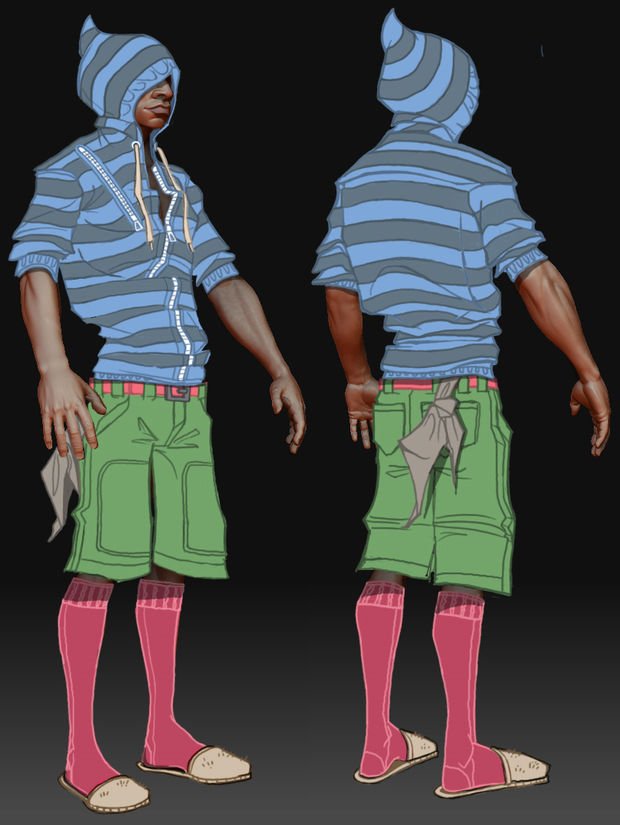 So maybe it’s appropriate that Harmonix’s internal profile of Mo, the first dancer we’ll look at, tells us that his favorite movie is the fictional fighting flick, Kung Fu Tales: Legend of the Ghost Warrior.

Mo is the one-man street team of the “Dance Central” crew, a promotor of sorts who you can see plastering DC propaganda all over city streets in the game’s strunning animated opening cinematic. He’s also the first character the team designed for the game, in part because of Perlot’s long-standing obsessions with getting a hoodie in one of Harmonix’s games.

“I love the silhouette that a hoodie creates,” he explains. “I have concepts through the years of trying to put hoodies on characters in our games.”

“The decision to obscure his face [with the hoodie] was controversial at first… it gave him a quirkiness that made him feel real,” he continues. It also happens to fit the character’s b-boy personality, and the fact that he stands apart from the DC clique, with no established rivalries with other characters in the game. 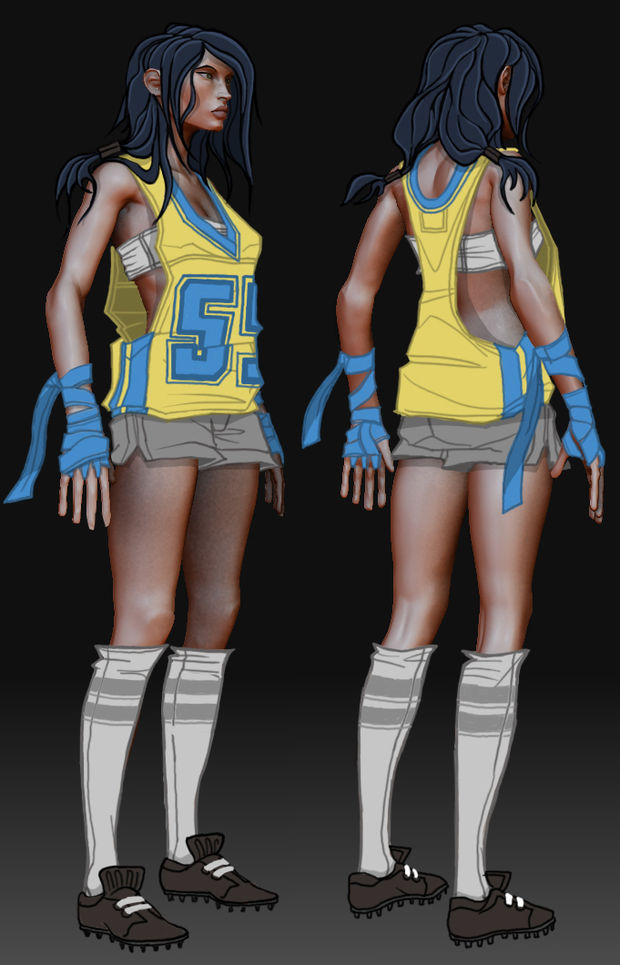 On the other end of the spectrum, however, sits the sporty and brazen Emilia. The raven-haired dancer with an athletic build and style makes no bones about her feelings for another of the game’s characters, the  “stuck-up” “know-it-all” ginger, Aubrey. Perlot says it was a kickboxing class that gave rise to Emilia’s sporty look, referring to the “all-around athletic girls” that he and other Harmonix’s staffers met at the local gym.

“Emila’s not really a tomboy in the typical sense, although she’s not as done up as some of the other female characters,” he explains, “she’s just this really cool, all around athlete.”

And just how cool is she, really? Emilia may have a reason to be a little arrogant, as she could very well be the most important character to the game’s development. As the first dancer implemented into an early prototype of Dance Central, she was the first character internal playtesters had the opportunity to dance along with.

[For even more details on Mo and Emilia, be sure to check out Harmonix’s official Dance Central blog later this week.]