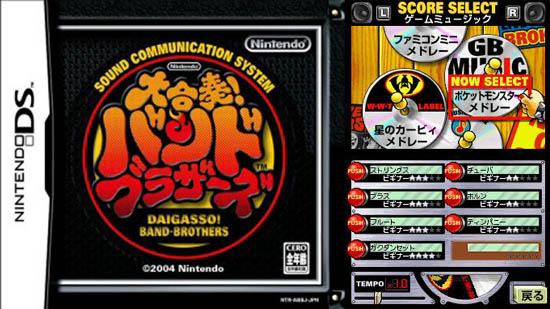 Ah, Daigasso Band Bros. When I bring it up (or play it), people either ask “what the hell is that?” or say “oh, I love that game!” But it’s something you’ll never find on North American store shelves.

This Japanese music game was released early on in the DS’s life (2004), but it was never released domestically. This was probably due to licensing issues, as the game consists of several Japanese songs, ranging from anime tunes to J-pop. Importers know it, and that’s about it for North America.

Multiple players can join in on and actually control/play the instruments in a sort of rhythm game. The control is fashioned as such that when you become proficient at keying in the correct notes, it actually feels like you’re playing the instrument. And, unlike current popular music/rhythm games, you are actually keying in notes from a real musical scale — in some ways, you actually are playing these songs. Even better, you can actually compose your own music in one of the game’s modes.

I could rant about the original title all day, but I’m really here to tell you that a sequel is in the works. Nintendic reports that the latest issue of Famitsu gives details on Band Brothers DX. It is scheduled to be released in Japan on June 26th, and will come with more than 30 tracks. The best part is that there will be more than 50 instruments, and one of them is actually the NES sound chip!

Like the original, there will be wireless jam sessions. The difference this time is that this new version will support Nintendo Wi-Fi download, providing the opportunity to release more than one hundred new tracks over time.

I’m so importing this. How about you?