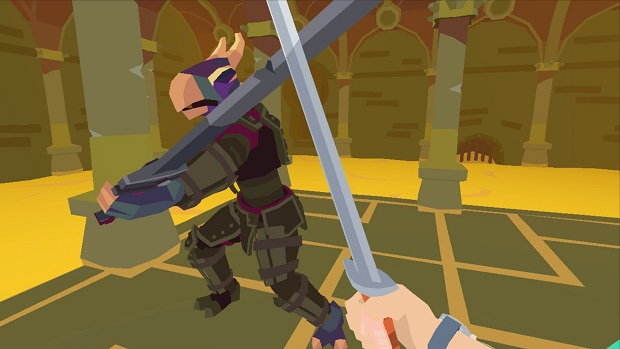 Dad by the Sword is iOS developer Rocketcat Games’ first entry into the PC market and boy howdy, is it a doozy. Part sword-fighting simulator, part long-running dad joke, all demented loveliness.

Rocketcat’s design experiment-turned-videogame is well into production with a delightful, if slightly challenging, demonstration that was featured in the Indie Minibooth at PAX East this year.

Have a look below at some of the candid footage our intrepid Beard on the Street, Jed Whitaker, took while on the show floor. The gentleman Jed’s talking to in the video is Kepe Auwae, designer and businessperson at Rocketcat Games. An amazing person to talk to, and one of nicest exhibitors that I met at PAX East this year.

From what I can gather, Dad by the Sword is a jocular take on Treyarch’s 1998 sword-fighting game, Die by the Sword, except that the protagonist is your dad. Well, perhaps not your dad specifically, but all of the dads. All of them, including your own. Yes, yours.

As the protagonist Dad, you’ll battle your way through hoards of Gruntmen, armor-clad beasts on a jealousy-fueled mission to end you and your dadly life. Hatched from eggs, they know not the love of a father and will not rest until every living dad falls to their swords.

Other enemy types discussed were the Shortsmen, another jealous foe of The Dad, murderously envious of your dadly pair of jean shorts. There are also the Hot Dog monsters you see featured in the video above. Sweet Jesus, those things are amazing…

While I admittedly didn’t master the intricacies of Dad by the Sword’s tactical first-person swordplay in my first brief attempt at the game, I was there long enough to watch Kepa’s brother John’s Zen-like mastery of it.

While I watched his amiable brother mop up the battlefield, Kepa mentioned that each enemy type has a set amount of hit points on multiple sections of the model, and when reduced to zero, that specific piece of armor or particular body part can be cut free from the whole to hilarious effect.

Dad by the Sword is expected to release for Windows, Mac, and Linux in late 2015.