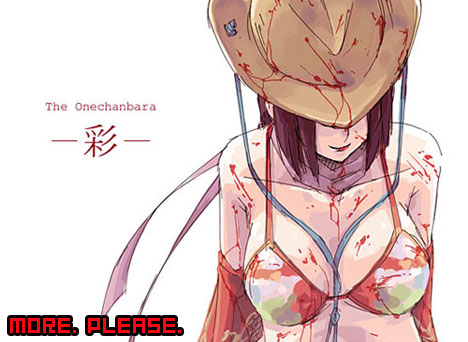 All I’ve seen of Onechanbara so far is my preview with Dale at this year’s E3, and even though we weren’t allowed to play it at the time, it instantly became one of my most wanted games of the show. No, it wasn’t as graphically stunning as Mirror’s Edge, but it’s about a mostly naked chick killing zombies with a samurai sword. Seriously, you would have to be partially retarded to muck up anything with that much potential.

Imagine my excitement, then, when I spied the news that publisher D3 has trademarked the name Onechanbara: Bikini Samurai Squad, on the same day along with Onechanbara: Bikini Zombie Slayers. Perhaps the final title has not been settled upon .. or perhaps this means we may see more Onechanbara action in the future?

Onechanbara is a popular property in Japan already, having spawned a live action movie and a variety of PVC figures. Some of Japan’s big franchises are probably considered too eastern (read: weird) for US audiences, but everyone relates to naked girls and zombies. Let’s hope D3 sees success with the title so we can have more boobs bathed in blood!