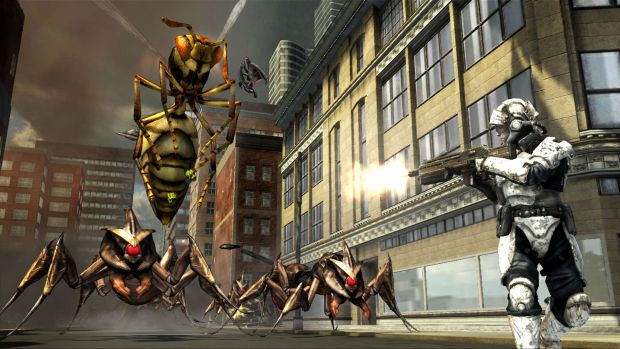 TODAY IS THE DAY I HAVE BEEN WAITING FOR ALL MY LIFE.

Okay, well, maybe that’s exaggerating, but you all know I love Earth Defense Force 2017. So hard. And in fact, when that new teaser website popped up for Insect Armageddon, I was more or less sure that something really awesome was coming. But you know, I like to be sure.

So what have we got with Insect Armaggeddon? Well, the big thing is multiplayer. Campaign mode allows up to three people to play together online. There’s also a local version of the game called Survival mode which allows up to six at a time to play — I can’t even imagine how that is going to look onscreen, but I can’t wait to see it. And also, GIANT METAL SPIDERS.

So what else? 150 weapons to find, of course, but also four fully upgradable armor sets (including jet armor, which is a throwback from Global Defence Force) — seems like a neat touch. The game comes to PS3 and 360 early next spring. It’s being developed by Vicious Cycle, who have worked on titles such as Dead Head Fred and Eat Lead: The Return of Matt Hazard. I had a feeling Sandlot wouldn’t be back for this sequel. but let’s hope Vicious Cycle can follow up on what made the last game so hilariously fun.

Will I get all the things I wished for in my 5 Things That Must Return in the EDF Sequel feature? Well, I don’t know. It seems like buildings are still fully destructible, and the screams in the trailer sound pretty hokey (YES!), but the rest remains to be seen. I’m loving the look of the game’s cover though (see gallery), so it seems like maybe we have something to hope for.

DON’T LET THE INSECTS WIN! Join the Earth Defense Force in the Battle

Between Man and Giant Bug in Earth Defense Force(r): Insect

The bugs are back in Earth Defense Force: Insect Armageddon, and its no

insect invasion ever threatens human civilization unless the Earth

Armageddon from D3Publisher (D3P), is a co-op multiplayer Arcade Shooter

turn an entire city to rubble in an unforgettable gaming experience

built for replay. Earth Defense Force: Insect Armageddon will be

entertainment system and is under development by Vicious Cycle and is

continues to follow the rich history of casual fun and addictive

gameplay that made the franchise a cult classic. Insect Armageddon also

Japan, with additional elements for all EDF soldiers to experience. The

insects and aliens across a completely destroyable city. Every EDF

in the series. In addition, the game also features a six-player

problem is unavoidable, and mankind’s last hope lies with the Earth

Defense Force to defend the world from the insect swarm, even if it

means blowing up the entire city as part of the extermination process.