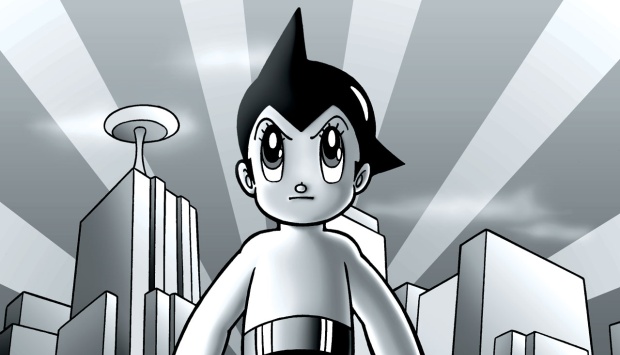 There’s a pretty big difference between the Astro Boy of Osamu Tezuka‘s 1952 manga and the slick new Astro Boy from the upcoming Imagi Studios CG film, but whatever incarnation you’re into, you have to agree that Astro Boy kind of rocks. D3 Publisher apparently agrees, as they’ve announced a game based on the upcoming film for the Wii, Nintendo DS, PS2 and PSP.

You play the game as Astro Boy (obviously) and get to use all of his classic weapons to fight your way through Metro City taking out robot hordes both familiar and new. Sounds like it could be a solid platform, although I’m eternally wary of licensed titles. I am pleased to see that the game will feature a 2 player co-op mode though. No word on a release date, but we’ll keep you posted. I’d be interested in this if D3 does it right (and knowing their track record, it could go either way).

LOS ANGELES – May 7, 2009 – D3Publisher (D3P), a publisher and developer of interactive entertainment software, today announced that it will bring Imagi Studios’ new CG-animated movie, ASTRO BOY, to Wii™, Nintendo DS™, PlayStation®2 computer entertainment system, and the PSP® (PlayStation®Portable) system.  Based on the upcoming feature film which itself is inspired by one of the most beloved characters of all time, ASTRO BOY: THE VIDEO GAME will allow players to become Astro Boy, a young boy robot with incredible powers.  ASTRO BOY: THE VIDEO GAME is slated to ship worldwide this fall to coincide with the North American and international release of the movie in October 2009 from Summit Entertainment.

“We are confident that the ASTRO BOY: THE VIDEO GAME will be a faithful adaption of the movie by successfully blending action gameplay with immersive storytelling,” said Alison Quirion, vice president of marketing, D3Publisher.  “Players of all ages will interact with the much-loved characters from the movie and square off against powerful foes from the movie for a rock solid gameplay experience from start to finish.”

In ASTRO BOY: THE VIDEO GAME, players become the iconic hero, Astro Boy, and take to the streets and skies on an epic adventure to save Metro City from the clutches of the evil President Stone and his robot army.  Utilizing Astro’s entire arsenal of iconic weapons and abilities–Finger Lasers, Arm Cannon, Butt Machine Guns and Drill Attacks, players will battle hordes of robot enemies and colossal bosses including some never-before-seen enemies across Metro City and the mysterious Surface.  Using an intuitive combat system that adds depth to gameplay, players will experience classic platform action and exhilarating flight combat levels as they use Astro’s unique rocket boosters to hover, avoid enemies and zip out of the way of danger.  ASTRO BOY: THE VIDEO GAME offers numerous unlockable and collectible elements that include exclusive art work, different versions of Astro Boy and more, as players live the story solo or side by side with a friend in 2 player co-op mode on Wii and the PlayStation 2 system.

ASTRO BOY: THE VIDEO GAME for Wii, PlayStation 2 system and PSP system is under development by High Voltage Software and Nintendo DS by Art Co. Ltd. The game is currently rated “RP” (“Rating Pending”) by the ESRB.

Set in the future, Astro Boy is a classic superhero origin story about a young robot with incredible powers and his adventure-filled journey in search of his identity and destiny, taking him into a netherworld of robot gladiators before he returns to save Metro City.

The iconic character Astro Boy has found global popularity since his creation in the early 1950s by Japan’s Osamu Tezuka, known as the “god of manga” and “father of anime”, and has been the hero of three acclaimed animated television series aired around the world.

Astro Boy, slated for North American release on October 23, 2009, is being distributed worldwide by Summit Entertainment except for Imagi’s reserved territories of Japan, Hong Kong and China.

Imagi International Holdings Limited (Stock Code 585, OTCQX: IINHY) is a listed company on the main board of the Hong Kong Stock Exchange. Imagi Studios’ principal business is the development and production of CG-animated theatrical feature films. Imagi’s first theatrical movie TMNT was released in March 2007, opening #1 in U.S. box office revenue, the first time in history that an Asian animated film achieved that honor. Imagi’s CG production studios are located at its Chai Wan (Hong Kong) corporate headquarters with development and marketing operations based in Los Angeles, California, and an office in Tokyo. Astro Boy is Imagi’s next motion picture for worldwide theatrical release in October 2009.  For further information, please visit www.imagi.com.hk.

High Voltage Software, Inc. is an award-winning studio that has been developing games and simulations for over 16 years. Located in Hoffman Estates, Illinois, it now employs over 170 staff members. The independent company has successfully produced a wide variety of license-based video game titles that include competitive racing, professional sports, horror, motion picture adaptations, and military simulations, and is now making its foray into original and innovative intellectual properties. More information about High Voltage Software and its products can be found at www.high-voltage.com.

Dark Sector® is a registered trademark of Digital Extremes.  All other trademarks are the property of their respective owners and used with permission.  All rights reserved.