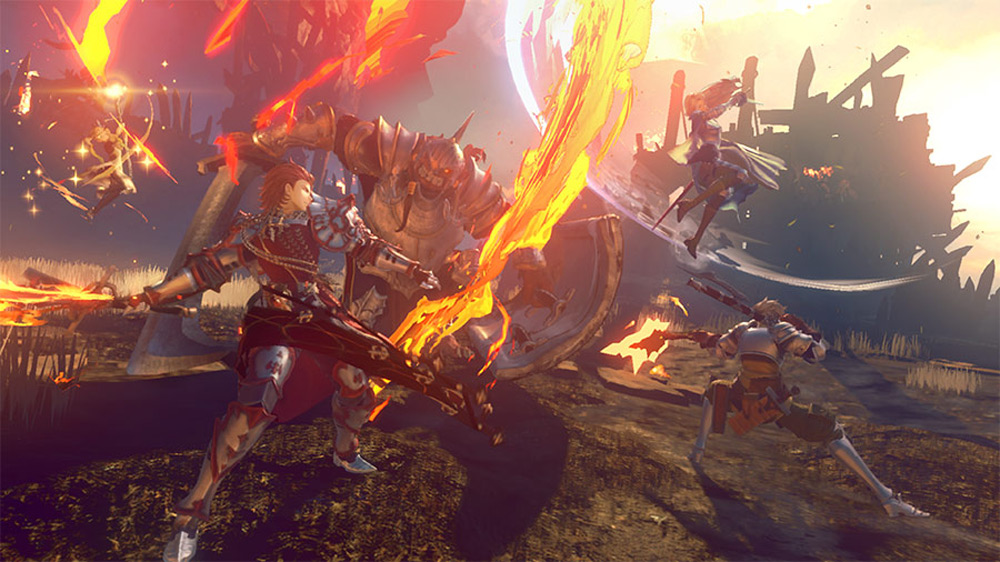 Cygames had a rather unassuming booth at this year’s E3. Actually, “booth” would be the wrong word to describe it. It was a cubicle, hidden in plain sight with the other cubicles that filled the concourse of the Los Angeles Convention Center. It didn’t need a big, flashy booth because it wasn’t at E3 to hype the media up for an upcoming game. Rather, after years of getting its feet firmly planted in the mobile realm, this appearance at E3 was its way of laying the groundwork for what’s to come. Sort of a tune-up of its seven trumpets.

David McCarthy, Director of Western Marketing for Cygames, was on hand to walk me through two of its games currently in development. While I can’t tell you about everything I saw, I will say when I walked out of that hour-long meeting, my body warm from the sake I was served, I knew I had witnessed the birth of the next great Japanese developer. 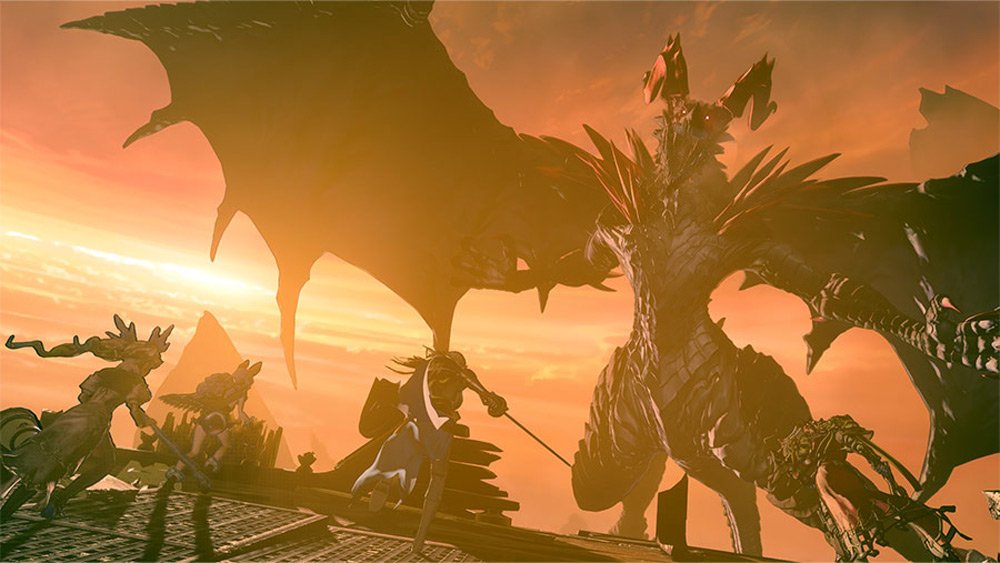 Cygames put out its first game, the mobile title Rage of Bahamut, in 2011. Since then, the company has developed more than two dozen games. Almost all of them have been Japan-exclusive mobile titles. The few non-mobile games it’s been a part of have been smaller projects like Wondership Q and one of those Idolmaster games. One of the few games from the company to release worldwide has worked out well. Shadowverse, a mobile CCG, made more than $100 million in its first year on the market and has become its own esport in Japan. This year the company is set to release Dragalia Lost in a partnership with Nintendo.

“We’ve had one big hit nearly every year since the company’s been in existence, ” McCarthy told me as he set up our first demonstration. “It’s given us quite a prominence in Japan. In Japan, the company is very well known and has a solid reputation for delivering quality games. But not many people know about us outside of Japan.”

Its biggest hit to date is Granblue Fantasy, a free-to-play gacha RPG that has spawned its own festival in Japan held in the same venue where the Tokyo Game Show is hosted every year. Since establishing itself several years ago, the company has branched out into anything and everything the company’s CEO finds interesting.

“Our CEO is just a guy who likes stuff and does what he likes,” McCarthy explained. “We sponsor Juventus, which is one of the biggest soccer teams in the world. We sponsor a Street Fighter team because guys in our company like beat’em ups. We sponsor EVO, we sponsor a Magic the Gathering team because we have Magic players on staff working on Shadowverse. We do anime, manga, merchandise, live-action dramas; it’s a very interesting company.”

McCarthy considers Cygames a creator-led company, something that will do it well going forward as it tries to expand its reach west with big, beautiful console games. One of the two titles in the works from the developer is Granblue Fantasy Project Re:Link. The game, currently planned for release on the PlayStation 4, is a collaboration between Cygames and another creator-led company, PlatinumGames. The title is still early in development, but what has been shown of it is absolutely breathtaking.

“This game really brings to life the mobile RPG,” McCarthy said. “The mobile game is mostly static images and text, but this is what you’d imagine that world to look like. What we’re hoping is Granblue Fantasy — which has a rich story, rich characters, and rich setting — we’re hoping that by tying that together with PlatinumGames’ action expertise we’re going to come up with something that’ll appeal to people worldwide.”

McCarthy was scarce with more details for Project Re:Link. We do know Cygames is aiming to launch the title in Japanese, English, French, and a few other languages at the same time. Other than the video above, that’s all the information they had to offer. As that trailer made its debut at last year’s Granblue Fantasy festival, I wouldn’t be surprised if we find out more at this year’s event.

The second title on display during my appointment was Project Awakening. This game has actually been known about for some time, but is, as McCarthy described it, about 1% developed at the moment. It’s being headed up by one of the creators of the Fox Engine used in the most recent Metal Gear Solid titles. The team of development veterans making the game is taking a “best of both worlds” approach, marrying the concepts that drive western-style RPGs with the delicious action combat Japan has spent the past 30 years perfecting. 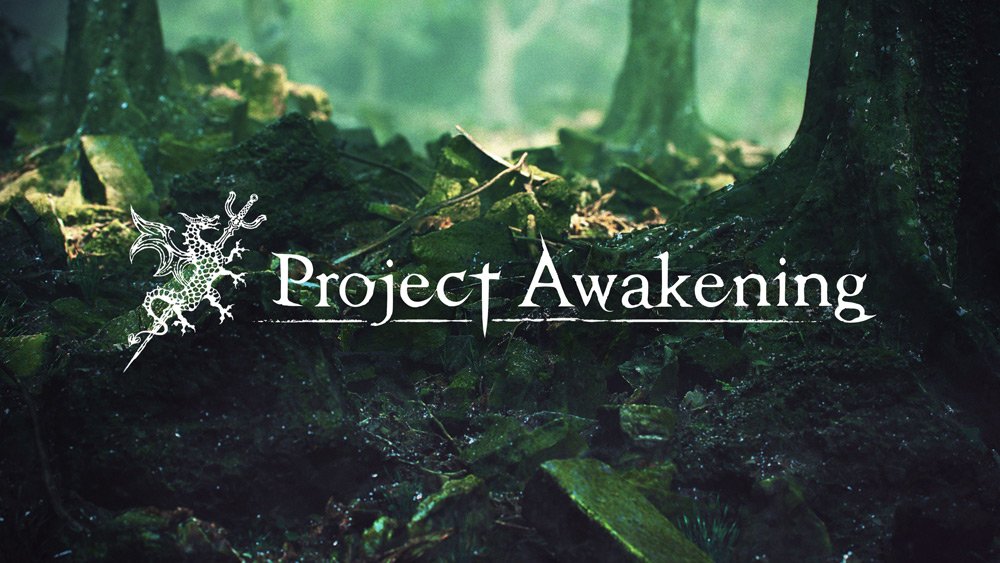 Unfortunately, I can’t tell you much more than that. The game is still years away from completion and the video I was shown of it — featuring a man fighting a dragon-type beast — would be difficult, but not impossible, to create on modern console hardware. For as brief of this presentation was, I can’t get one aspect of it out of my head: the man in the teaser video. I don’t know if he’s the lead character or something the player will be able to create, has a look about him I don’t regularly see in gaming.

He doesn’t look cool — or at least attempts to like the new design of Devil May Cry 5‘s Nero — and he doesn’t come across as some gruff, hardened soldier. He’s average looking in a way I don’t usually see in gaming, like if the actor who played Neville Longbottom stopped trying to appear sexy in gay magazines and instead spent his time plowing the land and churning butter. McCarthy spoke at length on how Cygames prides itself on its art and, having become accustomed to most Japanese-developed games sporting similar looking, almost interchangeable, characters, it’s absolutely refreshing to see a developer go against the grain and give us this remarkably unremarkable everyman.

Cygames is on the verge of something big. With Project Awakening and Granblue Fantasy Project Re:Link — as well as other, undisclosed titles the developer is working on –the company is investing time, money, and effort into creating games that can dominate consoles the same way it’s dominated the mobile market. Remember the name Cygames now, because in a few years, you won’t be able to ignore it.