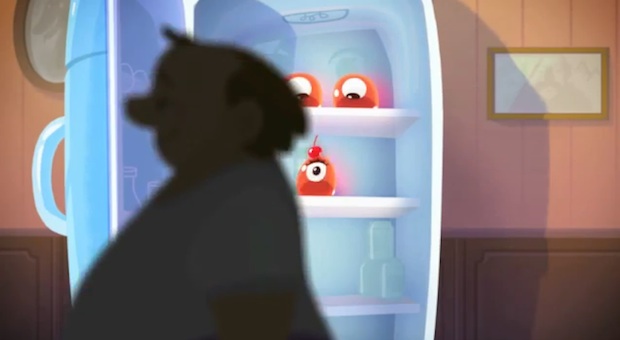 Mobile game Cut the Rope is still insanely popular. Developer ZeptoLab tells us that their game is the #4 paid app of all time, weighing in at more than 300 million downloads. That’s enough candy delivered to turn us all into Wilford Brimleys.

Not wasting any time, ZeptoLab is preparing their next title, titled Pudding Monsters. Carrying over some of the cuteness of weirdness of their previous game, Pudding Monsters has you lumping together…lumps to make bigger ones to avoid being devoured by the tubby guy that you’ll see walking past the fridge in the above trailer. Once big enough, the monsters will leave the fridge and the house it’s in to continue growing.

From the looks of the screenshots they’ve shared with us, Pudding Monsters is a puzzle title. It uses what they call “stick ’em together” gameplay to make monster shapes. Weird.

Pudding Monsters is coming to iOS devices and Android later this month. If the gameplay matches the charm and cutentess, ZeptoLab could have another hit on their hands.