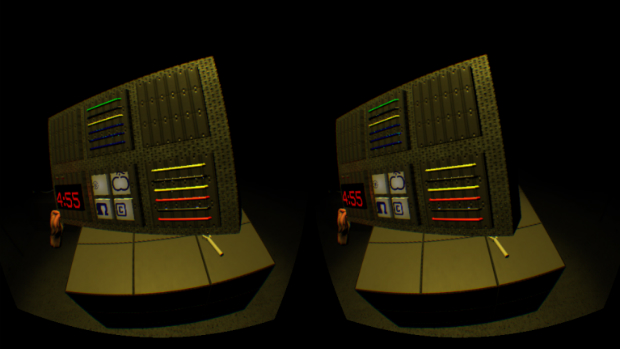 Wait, no, the blue one! Press the dog button! How much time is left?

Asymmetric cooperative multiplayer is an idea that I always love to see in action. Artemis has done a good job proving that the concept is sound, if not a bit cumbersome to execute. The newest game that falls into the category of cool stuff I would probably have to play at an event because of hardware concerns is the bomb defusal simulator Keep Talking and Nobody Explodes.

Developed for the recent Global Game Jam, Keep Talking and Nobody Explodes requires one player to take on the role of the defuser, using an Oculus Rift and a Razer Hydra as the interface. The rest of the players act as his support back at the lab, poring over bomb schematics in an attempt to make sense of the device so they can all safely defuse the explosive. Of course, the bomb is on a timer, so players must act quickly.

For a game built in just a couple days, it is surprisingly tense. Just watching the video above had me on edge, especially when the timer drops to about thirty seconds.