Much like the Xbox Live Arcade version that shipped last month, Lara Croft and the Guardian of Light won’t support online cooperative play on PlayStation Network and PC when it’s released on September 28. But don’t worry, it’s coming in a game update. When it does, developer Crystal Dynamics is certain the online experience will be as solid as the experience offline.

“Our goal from the very beginning [was] to make sure players had the same abilities that they find in other online co-op games,” Crystal Dynamics Global Brand Director Karl Stewart tell us. This means support for online leaderboards, voice chat, as well as drop-in and drop-out support.

Stewart won’t commit to a specific date for when the update will hit the PlayStation 3 and PC, instead telling us they’re focusing on “guaranteeing that [they] have the experience correct.” If all goes as scheduled, the XBLA update should hit by the end of the month, with a bonus — the first of the game’s upcoming downloadable content free of charge for 30 days following its release.

Making sure the online experience is up to par

Stewart admits that the Crystal Dynamics team had decided very early on that both offline and online cooperative play was going to be a “huge component” of Guardian of Light. So what happened?

“We reached a point in time where we evaluated where we were with the online, [and] we decided that the experience wasn’t up to par. We believe it should comparable to the single-player and the offline co-op version [of the game].”

That meant making the tough to decision to release the games without cooperative play, in order to fine tune the online experience to get it just where they wanted it. Simply put, the team just needed more time to make it a reality. Despite what you’d think based on many gamers’ response to the lack of online co-op at launch, adding the functionality to a game isn’t quite as easy as waving a magic wand or pressing a button.

“There’s complexities you wouldn’t normally find in offline co-op,” Stewart explains, “with leaderboards and being able to drop in and out. We just wanted to make sure that when players got their hands on it they felt that it was a consistent experience with everything they had played before that.” 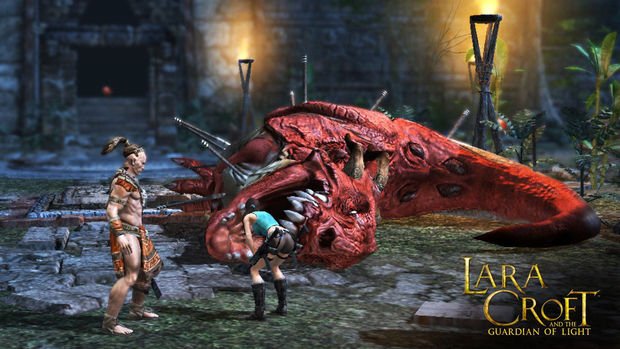 Stewart even reveals that when the XBLA game receives an update (tentatively scheduled for later this month), it’ll be more than just an online co-op patch — it’ll include additional content.

“It will be a free title update, and we’re also giving away the first downloadable content pack for Xbox 360 users for 30 days, free of charge,” he says.

This first of a monthly wave of DLC, the content will feature a brand new set of challenge maps created based on what both players and focus testers loved about the core experience.

“They’re pretty tough levels,” he warns, “and they’re made of a combination of exploration, combat, and sort of the whole traversal world we’ve built into Guardian of Light.”

While he wouldn’t commit to this same content being free for PC and PSN when the titles receive their respective updates, he does say an announcement is forthcoming in the “very near future.” 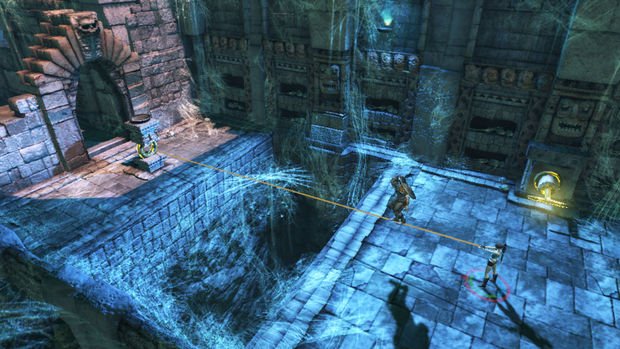 With or without online cooperative play, Guardian of Light has been receiving stellar reviews; we rated it a 9 out of 10, saying “it’s not to be missed.” Stewart says Crystal Dynamics was thrilled with the response, pointing out that it’s the highest-rated Tomb Raider title since the first game’s debut in 1995.

“I think we’ve managed to everything that we said we wanted to do,” he says, in respect to delivering a high-quality downloadable title, Crystal Dynamics’ first. “We’re even more excited to get the online portion out; that’s our next big goal.”