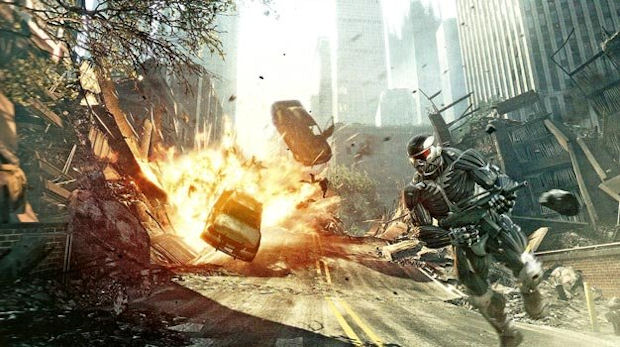 German PC magazine PCGames has some spicy new details on Crysis 2, that big PC games that nobody will ever be able to run … oh, wait, it’s on consoles as well? Yay! Now more than three percent of the population will get to play it!

Crysis 2 is set three years after the original and based in a ruptured New York City. A whole bunch of surprises and a deeper storyline than Crytek’s usual fare has been promised, so look forward to a more story-driven experience this time around.

Players will get their hands on the new Nanosuit 2, which has been changed up quite a bit. The suit has a “tactics” mode that allows players to scan the environment, locate enemy soldiers’ positions, and gather data from downed soldiers. The suit will have four modes once again, but the “power” and “speed” modes have been combined.

The city environment lends itself to more vertical levels, which will add to the tactical options. For example, players will have the option to attack enemies from above if they gain the higher ground. Crytek is currently showing off the Xbox 360 version of the game, and they claim Crysis 2 is among the best looking console games on any system.

Sounds promising. Outside of the visuals, I really wasn’t impressed with Crysis when I played it, but I’m all for a sequel if they can make the combat more balanced and interesting.

Crysis 2 among the best looking games on any platform, first details arrive [That VideoGame Blog]