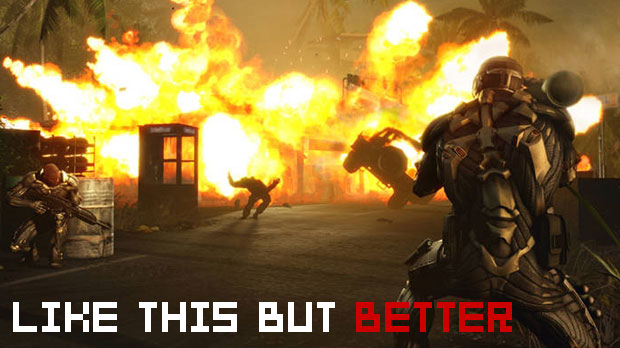 Crytek has announced its latest engine, the “the all-in-one game development solution,” CryENGINE 3. It will be the first development platform for use with Xbox 360, PlayStation 3, MMO, DX9/DX10 and is said to be “Next-Gen-Ready.” And by that they mean the consoles and PCs you’re not even using yet.

There’s a press release with some technical mumbo-jumbo after the jump, all of which boils down to “our engine is really easy to use and it’s going to kick some serious ass.” Crytek plans to wow the masses with the first demonstration of its technology at Game Developers Conference in San Francisco, which goes down March 25 through March 27.

“We’ve been preparing a long time for CryENGINE on consoles and we’re confident that Crytek will again amaze developers at GDC,” said Crytek’s Carl Jones.

We hope to be amazed, too. We’ll make sure we stop by to check it out when we’re in San Francisco for GDC, so check back for all of our “oohs” and “ahhs.”

Frankfurt a. M. (Germany), March 11th 2009 – Crytek GmbH (“Crytek”) is excited to announce that they will introduce their latest all-in-one game development solution CryENGINE 3, at this year’s GDC Expo (March 25th – 27th) in San Francisco. CryENGINE 3 is the first development platform for Xbox 360, PlayStation 3, MMO, DX9/DX10 that also is truly Next-Gen-Ready – with scalable computation and graphics for all major upcoming platforms. It provides the complete game engine to create AAA quality next generation games, and includes the CryENGINE 3 Sandbox™ level editor, a production-proven, 3rd generation “What you see is what you play” (WYSIWYP) – tool designed by and for professional developers. CryENGINE 3 comes with significant new features specifically designed for console, online, MMO and Next-Gen game development.

“With CryENGINE 3 we are delivering our best game development technology that enables our clients to achieve their vision on current and future platforms to develop games such as MMOs, action games and more. Our complete game engine solution enables realtime development, ensures teams are able to maximise their own creativity, saves budget and creates greater gaming experiences. Also with our solution developers can start working on their next generation games today.” said  Cevat Yerli, CEO & President of Crytek.

“CryENGINE 3 is a revolutionary change from our previous PC-only engines – and we’re applying a similar revolution to the service we provide to developers using the software to create extraordinary games.  CryENGINE 3 will set the benchmark for complete game engine solutions in performance, and services to game engine licensees and their players.  We’ve been preparing a long time for CryENGINE on consoles and we’re confident that Crytek will again amaze developers at GDC.” added Carl Jones, Director of Business Development CryENGINE.

CryENGINE® is the underlying technology for Crytek’s critically acclaimed games Crysis and Crysis Warhead and has already been licensed to a number of major game companies around the globe, including several recent serious games training and simulation projects.

Crytek’s Engine Business Team will be available during the show for meetings to discuss licensing details with prospective clients. In addition, Crytek will be hosting a series of public presentations at their booth #5940 in the North Hall.