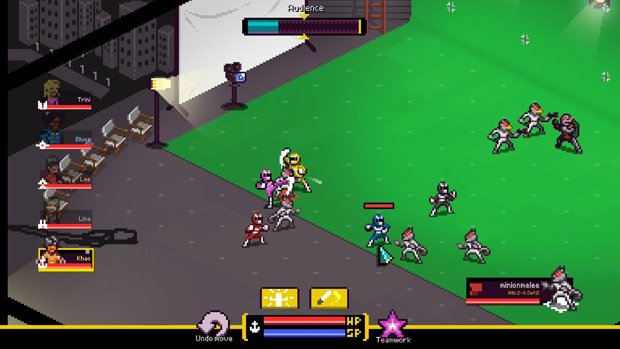 Behold Studios’ Chroma Squad is about managing a brand new sentai television series and, being an in-depth parody, it of course draws inspiration from real-life shows, including — but far from limited to — Power Rangers. In an update sent to Kickstarter backers, the studio said that Saban, the rights holder for Power Rangers, has been in contact over the game.

It seems Saban wants royalties for Chroma Squad, or else it’ll go to court to prevent the title’s release. The two companies are trying to reach a deal for the former option, as “going into court would be painful for both sides,” according to Behold.

“You all know that our game is inspired by something much broader than Power Rangers,” continued the studio. “We’re talking about an amazing sentai culture that is mostly Japanese, but got even bigger with fans from around the world. We’re talking about tokusatsu in general, Japanese super heroes, animes, kamen riders, everything that inspired us very much in our childhood and continue to inspire us now.”

From the sound of it, they’ll be able to resolve this situation. “We’re talking to them right now and we hope that everything goes well, and we can stay indie as we want, and as the game needs to be: heartful, inspiring, amazing, and with a lot of jokes, quirky stories, and every bit of the meta layer that we love. Don’t worry, we’ll do everything to make the game come out!”

I’d sure hope so — Chroma Squad is one of my favorite games to come out of Kickstarter. Here’s hoping Behold doesn’t have to give up too much.