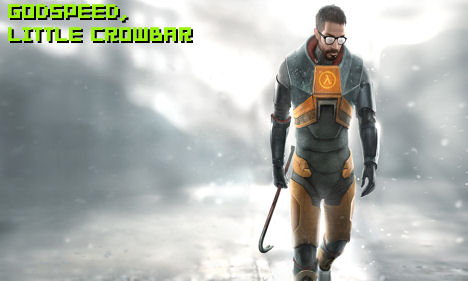 A month ago we posted a story about Reddit offering to send a crowbar to the brains behind the Large Hadron Collider project. Many fear that the particle accelerator at Cern could cause the end of the world, and a possible resonance cascade — along with obligatory Half-Life headcrab infestation, too.

Our very own Dyson claims that the Large Hadron Collider isn’t possible of causing any lasting damage to humanity, but his ways are the ways of folly. Those of us who actually play videogames that were released after 1983 know a little something about science, and we’re preparing for the reign of The Combine.

Luckily, the Reddit lads who offered the crowbar that would save humanity have now shipped it to CERN, along with a note that reads: “Get this to Gordon Freeman. He’ll know what to do.” When thanked for their service to humanity, the providers of the crowbar had only this to say:

Classy as Hell, gentlemen. Classy as Hell. Let us pray that the crowbar reaches Dr. Freeman in time to stave off the Xen hordes that this Collider will definitely produce.