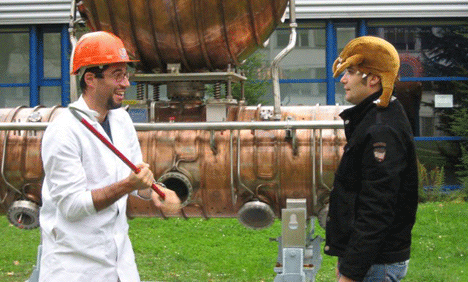 You guys remember when Reddit decided to send a crowbar to CERN scientists in case a Half-Life-like resonance cascade came from the firing up of the Large Hadron Collider? We laughed, because funny things are funny. (Not resonance cascades; that’s kind of scary.)

It gets better — a Reddit had a CERN physicist deliver the crowbar personally to the real-life Gordon Freeman look-a-like CERN worker. Pictures were taken, and they were — as you’d expect — completely awesome. The fruits of this labor (an obvious attempt to protect mankind, in case of, er, complications) can be found here.

So now it’s contest and fun time. Time to bring out the big guns and put together some video, throw together some Photoshops, and YTMNDs in honor of this great success. The prizes? We’re not sure, but they’ll be good … we promise. But are you really doing this for a prize? No, you’re doing it for fun. And the good of mankind.

Post your images, links to videos, and links to YTMNDs in the comments below. Go nuts with it. We’ll accept submissions until you stop making them or we get bored (sometime next week), so keep ’em coming.

Filed under... #Command and Conquer#Half-Life