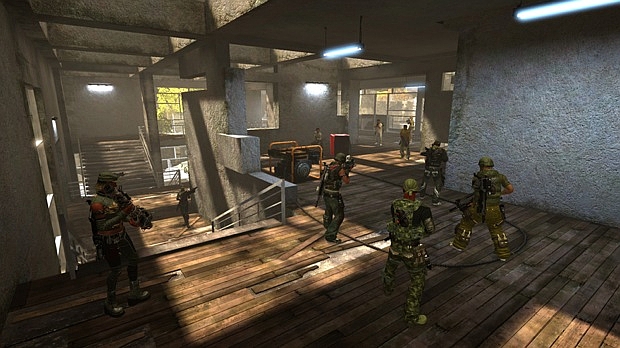 Late last week at E3, I had the opportunity to watch a short demonstration for Vogster Entertainment’s MMO Crimecraft. Unlike some of the other MMOs I saw at the colossal event (Star Wars: The Old Republic, All Points Bulletin), Crimecraft was up and running with real players actively participating in the game.

As you can assume from the name, Crimecraft is an MMO that puts you in the role of a thug in a particularly rough world — the planet’s climate, politics, and the economy have all went to s–t, resulting in a Judge Dredd “scorched Earth” world.

So, the goal in Crimecraft is to make the most out of what you are by participating in frag fests, rolling with gangs, and accumulating loot. You know, the usual stuff a person would do if everything outside city walls were brown and red.

The action in the game — in its instances — reminded me of a mix between Grand Theft Auto and Shadowrun: third-person shooting with real life weapons combined with specific skill usage (ability to turn invisible, for one). There’s no real difference between levels, except for AP allotments (the stuff that lets you turn invisible) which help in the PvP-oriented play. (There will be some light PvE action, though.)

The game is currently in closed beta, but an open beta will be announced soon. If you’re interested in the game, check out the screenshots below. (Spoiler alert: there are digital humans in the most of the images.)