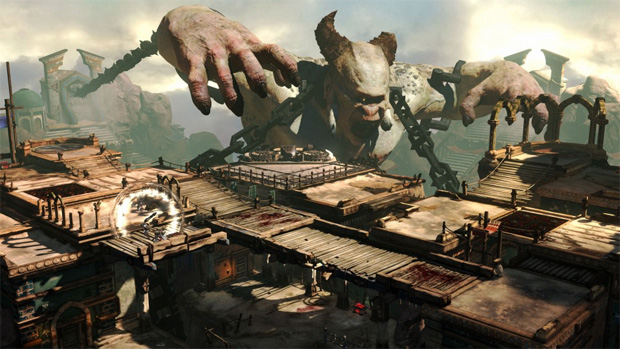 The official blog for God of War has posted a new Q/A with the Lead Character Concept Artist for God of War: Ascension, Izzy, which takes an in-depth look at the first ever multiplayer boss encounter for the series, Polyphemus.

For those not up on their Greek mythology, Polyphemus is quite possibly the most famous cyclops ever. The son of Poseidon and the nymph Thoosa, Polyphemus plays a significant role in the myth of Odysseus when he captures the returning sailors and begins eating them, two at a time, until the Greeks manage to get him drunk and blind him with a sharpened branch to enable their escape. Polyphemus would later pray to his father for vengeance, causing further problems on the voyage.

Sony Santa Monica has played with the mythos a bit, making Polyphemus into a full-on Titan (still the son of Poseidon; try not to think about it) and Izzy — also responsible for the gory “Elephantaur” — goes futher into the inspiration and approach to making this massive bad guy.

Make sure to read through to the end for a nauseatingly graphic description of how Kratos himself would deal with this one-eyed monstrosity. Eugh.