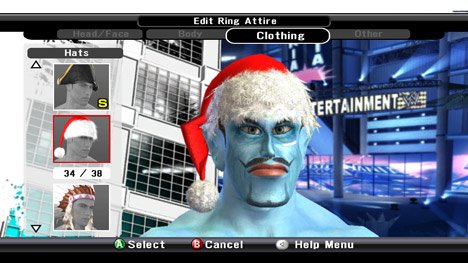 As promised, THQ has delivered a patch for WWE Smackdown vs. Raw 2009 that directly impacts the Create-a-Superstar.

The patch, which is now available on the PlayStation Network, will allow players to give their created superstars increased attributes after the completing the game’s Career Mode once. Previously, you’d have to play through career mode to increase a superstar’s abilities and attributes which was, quite simply, pretty silly. Additionally, entering the code “MAXCAS” will let players max out their characters, instead of going through the Career Mode.

Now wrestling fans are free to make their created character down to the smallest attribute detail. We know how obssessive wrestling game fans can get. THQ says the patch will be available for the Xbox 360 in early 2009, but a request for specifics came back with a “no comment.”

I reviewed WWE Smackdown vs. Raw 2009 back in November, and found it to be one of the best in the series in quite some time. Is there anyone still playing Smackdown vs. Raw? Have any hot created wrestlers you’d like to share?