The first thing you’ll notice about CounterSpy is its unique art style. Really, you can say that about a lot of the indie titles Sony has been picking up lately, but there’s something extra special about this one. That probably has to do with the fact that the ten-man team at Dynamighty is comprised of ex-LucasArts and Pixar folks.

As you can probably tell from the title, CounterSpy has you playing as a spy tasked with infiltrating two opposing superpowers in order to sabotage their weapons of mass destruction.

The story draws inspiration from the Cold War era, when the United States and the Soviet Union were a button press away from unleashing nuclear winter upon the world.

“If you abstract yourself from how scary it was, it was this super fascinating time from a historical perspective,” co-founder and lead designer David Nottingham told me. “You had these two opposing sides that represented these very, very different ideologies. They’re both pursing these kinds of crazy goals of like ‘let’s build all these nuclear missiles!’ Some of the crazy plans they were putting into place when you read about when files get unredacted after 30 years is almost as bizarre as some Bond plots.”

David felt the time period would be a great area to play with, but they’re not going for historical accuracy here. They’re creating a fun world, as if CounterSpy was some long-lost TV show from that era. Some of the inspiration of also comes from titles such as Shadow Complex, Flashback, Metroid, Impossible Mission, and Prince of Persia. Those last two games in particular had a lasting impact on David, mesmerizing him at a young age from how they let players infiltrate environments.

The action espionage game is primarily set as a 2D side-scroller, but there are points when the perspective switches to open the environment up. These camera changes happen when you take cover, which you’ll want to do in order to take out guards safely. You can attack guards from the 2D perspective too, but you may not see them coming until it’s too late due to the limited view. 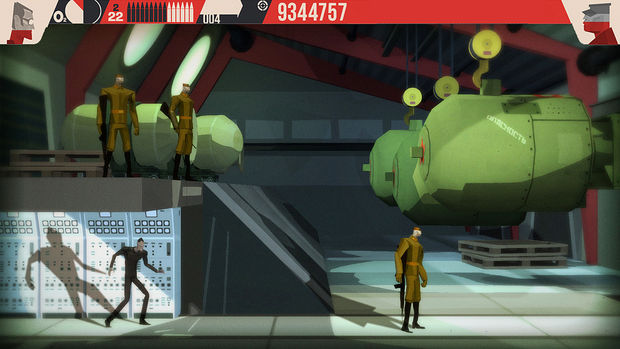 Every level has you infiltrating a rocket launch site, and there’s a countdown timer indicating when the rockets will launch. Your objective is to reach the launch pad and sabotage the controls before the rocket takes off. There are computers that you can damage along the way too, which will delay the countdown and buy you more time.

Levels also have blueprints and files which can go toward unlocking experimental weapons. CounterSpy has some limited Cross functions between the PlayStation 3 and Vita versions, where if you find these blueprints in one version they’ll be automatically unlocked in the other. Not the best Cross feature ever, but there’s going to be more things announced in the future.

Employing a unique art style like this isn’t easy, so it’s a good thing a partnership with Sony goes beyond just PR and marketing.

“Our resources are super limited, and there are certain things that would be kind of though for us to do on our own,” David stated. “Like, character modeling is one of those things where it’s really hard to do right. We were actually able to work with Sony and have them create the character model for those guards. It’s just one of those things when you’re doing something stylized you can look at something 2D and think, ‘Oh, that looks awesome,’ but you never know how it’s going to look as a 3D model. [Sony] just hit it out of the park straight away.

“For us, that’s nice to have. It’s more than just PR and marketing. They can actually help with some of the development. They’re making a big push to work with smaller independent developers like us.”

I think Dynamighty is doing something really special here. I am a little worried that all the levels will be rather repetitive if you’re being tasked with the same goal in each. Hopefully there’s a lot of variety to how you can accomplish your goals.