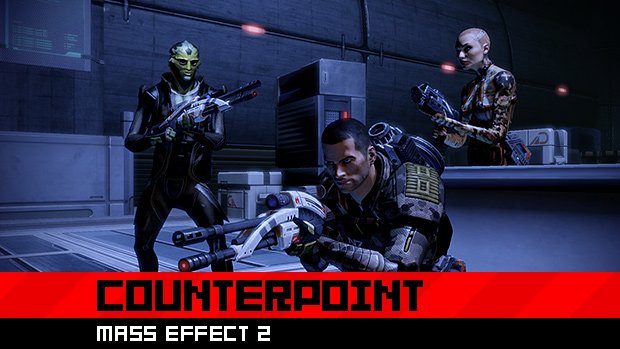 Last week, Brad Nicholson reviewed Mass Effect 2. Awarding the game a ten out of ten, Nicholson called the game “one of the best real-time action RPGs I’ve ever played.” This is a counterpoint to that review, and focuses more on the narrative aspects of the game.

Two of my crew are dead. I knew that lives would be lost on this mission, but it still came as a surprise to see two of my crew members — one of whom I especially cared for — die right in front of me.

On the one hand, I mourn their loss. On the other hand, I’m ecstatic that Mass Effect 2, unlike so many videogames, goes beyond mere fantasy empowerment and actually tries to build its mechanics around tragedy and loss. On a third, mutant hand, I take serious issue with the way those little tragedies are implemented.

Mass Effect 2 thrilled me, frightened me, and made me shout at my television in surprised, tragic loss. Yet, I can’t help but think of the game as a first, flawed step toward something even more remarkable.

Assuming you already know that the game ends with a mission where your crew members can die, there aren’t any huge spoilers here. I do discuss the basic parameters of that final mission, however. 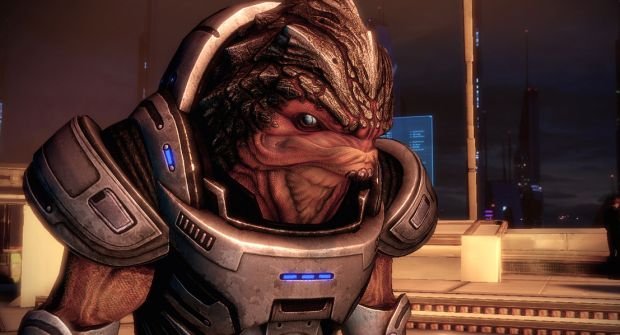 I love the fact that I spent the entire game terrified that my squad might die. I truly, deeply adored the sensation of being constantly, subtly nervous about exactly what might happen to my squadmates. Every time I met a new character, my excitement at gaining a new crew member was tempered only by the knowledge that, if I didn’t play my cards right, I might very well have to watch them die.

I can honestly say that I’ve never really felt that in a game before. So much dramatic tension in narrative videogames feels phony, even at their best. Naughty Dog wants us to believe that, if the bad guy gets to the doomsday weapon and uses it, Nathan Drake might die. Yet, we know that isn’t true: if the player fails to beat the boss in time, he’ll simply get another chance to do so, then another, then another, until the player finally kicks the prerequisite amount of ass and emerges victorious. There’s no real consequence outside of what the cut scenes say there is, and the player only exists to move Nathan from cut scene to cut scene.

Not to suggest that Mass Effect 2 is some sort of revolutionary narrative experience (if you die while fighting the endboss, you’ll respawn and try again just as any wisecracking treasure hunter might), but the fact that I knew my actions would eventually have real, permanent consequences imbued my experience with more consistent tension than I had expected.  I wanted all of my crew to live to see Mass Effect 3, but the game told me that — because of decisions I would make — many of them probably would not. This fact alone makes Mass Effect 2 one of the most legitimately suspenseful games in recent memory. 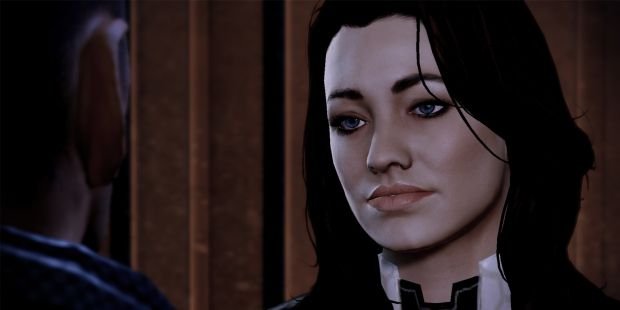 Thankfully, the story itself does everything it can to heighten that character-driven suspense: rather than spending a lot of time trying to match the epic scale of the first Mass Effect, the sequel wisely focuses on getting the player attached to the NPCs whenever possible. The larger plot adds almost nothing to the player’s knowledge of the Reaper threat, revolves around considerably less epic events, and, in terms of what is actually accomplished by Shepard’s mission, serves almost solely to lead into the events of Mass Effect 3.

And yet, it works. It doesn’t matter that the Collectors’ ultimate goals make so little sense, or that “The Illusive Man” is the silliest pseudonym in recent memory. Mass Effect 2 isn’t a story about evil aliens or Martin Sheen or bosses who need to be shot in specific weak points: it’s about a suicide mission, and a group of sympathetic NPCs whose lives are in the player’s hands. The game has absolutely nothing to do with the fate of the galaxy, and absolutely everything to do with the fate of twelve people.

At least half of the total missions in the game revolve around either acquiring or gaining the loyalty of your different crew members. The other half are varied enough in terms of enemies and situations that, for the first time ever, I actually found myself using each of my crew members from time to time rather than just staying with my two favorites for the entire game. The squad-as-a-singular-entity levelling system, where all members of your squad have access to the same number of skill points regardless of when you recruit them or whether or not they helped you complete a mission, encourages you to spend time with each of the different members of the crew. As you begin to see their usefulness in combat, you often grow attached to them and subsequently, the final mission becomes that much more foreboding. I didn’t personally like all of my companions, but I understood them. I found their individual biotic and tech powers useful. I sympathized with them. I did not want them to die.

Two of them did.

But Thane Krios and Samara died not because I’d made difficult choices that indirectly led to their deaths, nor because I’d specifically chosen to save one person over another. No: they died because I chose the wrong answer to a multiple-choice question.

Before the suicide mission, my crew’s survivability seemed to depend upon the largest Wrex Paradox in history: by doing loyalty missions and upgrading the crew, you are simultaneously proving that you care about them and making them less likely to die. Initially, I was worried that, since I’d turned all but one of my squad members loyal (Zaeed didn’t much care for the decisions I made in his sidequest), none of my crew would be in any real danger. Thankfully, I was wrong. Sort of.

While being prepared doesn’t guarantee that your squad will make it out alive, not being prepared certainly guarantees that some of your crew will die. I didn’t personally have to see the effects of, say, neglecting to upgrade the Normandy’s armor and weapons, but I have to ask: why are preparedness and tragedy so diametrically opposed to one another for much of the game? Why do crew members mostly live or die based not on legitimate choices, but on how much time you spent upgrading armor, or doing optional sidequests, or getting your Paragon/Renegade score really high so that you don’t have to pick sides in any of the arguments between your crewmates? Why structure the missions in such a way so that if you didn’t care enough about the crew to upgrade the Normandy, more members of the crew (whom you just proved you didn’t like, and whose deaths you would subsequently not mourn) will die? 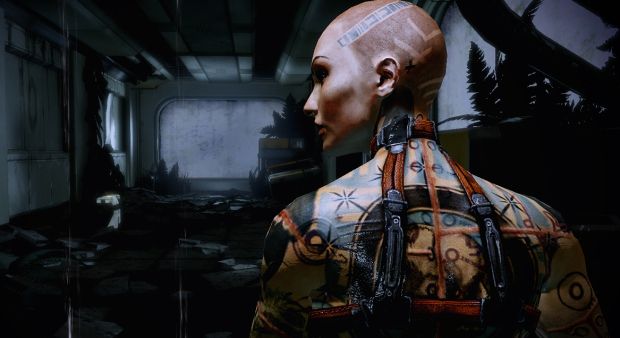 The player is seldom tasked with any real, honest-to-goodness dilemmas if he or she just works hard enough and completes enough sidequests. The dull, repetitive element mining minigame perhaps best encapsulates this design philosophy: of all the player’s myriad strengths and abilities, their surfeit of free time is the one most valued by Mass Effect 2. Thematically, the game seems to have less in common with Dragon Age, whose ending forced the player to make challenging, impactful choices, than it does the old story of the grasshopper and the ant. So long as you have sufficient free time and an imported character (thanks to the moral alignment bonu at the start of the game), much of Mass Effect 2 is an ethical breeze. And that’s unfortunate; why should dedication to the story and characters preclude me from experiencing legitimate drama?

Thankfully, however, preparedness alone won’t keep your friends alive: one other factor determines the fate of your crew. Somewhat less thankfully, that factor is dumb luck. Or at least, something that very much feels like dumb luck.

You go through the Omega 4 relay, you watch the Normandy fly around, you make an inspirational speech. Now, it’s decision time. Who will lead the distraction team, who will sneak around in a ventilation shaft?

While I truly appreciate the fact that BioWare refused to let the player’s completionist tendencies save the lives of the entire crew, I’m not sure that forcing me to arbitrarily assign crew members to particular jobs was the best way to decide the fates of people I’d spent thirty hours getting to know. 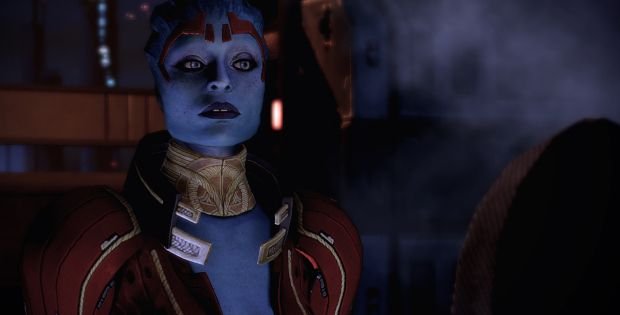 While Thane’s death hit me hard enough that I screamed, “No!” at the screen, it felt random, and somewhat unearned. Unlike the NPC deaths at the end of Dragon Age, I didn’t feel like Thane’s death reflected back on my input in any signficant way. When a particular character bit the dust at the end of Dragon Age, it resonated with me not because I particularly liked him (I didn’t), but because my actions had clearly led to his death, and I had to live with the knowledge that I was responsible. When Thane died in Mass Effect 2, I simply felt like, again, I’d incorrectly answered a multiple-choice question.

The arbitrariness of Thane and Samara’s deaths was shocking, but since the deaths didn’t really mean anything beyond emphasizing my inability to choose the right person for the right job and that war is an intrinsically unfair, sad, and random thing, they didn’t hit me as hard as they could have. This isn’t to suggest that seemingly random or meaningless character death is an intrinsically poor storytelling tool (anyone who has seen Serenity can tell you this isn’t the case), but the concept doesn’t fit particularly well in a nonlinear roleplaying game where your choices are ostensibly meant to have direct and meaningful consequences.

There was a potentially beautiful moment near the very end of the mission, when my oldest friend (Garrus) and my love interest (Tali) seemed to be in serious danger.  The two were trapped under rubble, and the ship was collapsing all around us. I’d beaten the final boss, and the moment seemed like the perfect opportunity to throw one last wrench in the works — to prevent me from basking in a moment of triumph by forcing me to choose which of my two favorite crew members to save before the entire ship was destroyed. I really, really didn’t want to make that decision: I’d proven to the game that I cared about Garrus and Tali, because they were the two I trusted enough to take with me into the final battle. I didn’t, under any circumstances, want either of them to die. I would have given almost anything to not make that choice.

And that’s exactly why I should have been forced to.

Mass Effect 2 could have been a story of sacrifice, leadership, tough decisions, and guilt. As it stands, it’s about preparedness and shitty luck. The foundation is there for a tremendously affecting story about death — the palpable sense of foreboding, the permanent consequence, and the narrative emphasis on compelling, sympathetic characters — but the payoff falls short.

Or, to put it another way: I’m really looking forward to Mass Effect 3.