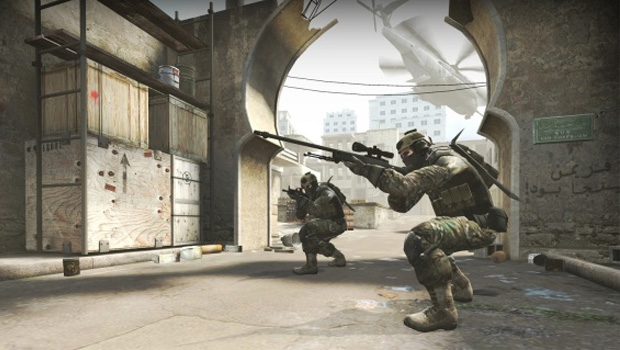 If you were at PAX and you met someone who played Counter-Strike: Global Offensive, they will describe it in one very simple way — it’s Counter-Strike!

Seriously, that’s all you really need to know. It’s obviously better looking, it’s clearly reaching a wider audience, and it’s destined to have plenty of fresh content, but at its heart, this is a game that knows exactly what it is. It’s Counter-Strike!

It’s as simple as that.

While Battlefield 3 and Modern Warfare 3 duke it out, we’re seeing a refreshing revival of “old school” first-person shooters. Hard Reset and Serious Sam 3 are bringing us classic run-and-gun violence festivals, while Global Offensive is going to bring us back to a world where online gaming was less about kill streaks and more about running about, shooting the crap out of each other.

Counter-Strike: Global Offensive sits at the root of online shooters. There’s no cover system, there’s no manual sprint mechanic, there are just terrorists and counter-terrorists, with guns at the ready. Valve was very keen to point out how those players brought up on modern shooters were failing — criticizing those who stood still in a shoot-out and praising those who understood the concept of fast-paced, unsubtle action.

Each play session lasted four rounds of elimination deathmatch, and those rounds whizzed by swiftly. GO is the kind of game to play when one wants quick bites of action, rather than a four-course meal. That’s not to say it’s unfulfilling, of course. It’s elegantly simple and provides the instant gratification that we all need from time to time.

The game looks pretty damn decent. No, it’s not graphically stunning like Battlefield 3 or full of setpieces like Modern Warfare 3, but it’s a significant visual upgrade using the faithful Source Engine. Ultimately, GO is a game that doesn’t need to look lavishly gorgeous. It’s a game that just gives you a gun and tells you what to shoot.

So yes, Counter-Strike: Global Offensive is indeed Counter-Strike. It’s not a huge reimagining, it’s not a gritty reboot, and it’s definitely not planning to reinvent the wheel. With a franchise that has been adored for over a decade, though, who really wanted that? This is Counter-Strike, prepared just the way you like it.