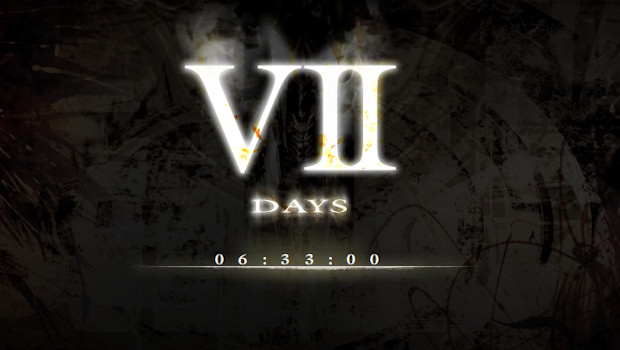 That’s right, it’s yet another stupid teaser countdown site! Square Enix (and indeed, many Japanese publishers) love the Hell out of these things, but this particular one is a little bit special. It’s special because it brings with it the cruel hope of a Final Fantasy VII remake. The page says “VII DAYS,” and promises a grand reveal at the end of the week. Foreshadowing!

Teaser sites are known to disappoint, so I’m not going to get too excited just yet. However, a VII remake is something people have been expecting for a long time now, so there will likely be rioting in the streets if Square Enix is maliciously pulling on heartstrings for no good reason. I kind of expect that from this company days.

The idea of a VII remake has always torn me. I know the original version never aged well, but it’s a classic, and I still love playing it. Furthermore somewhat rubbish Advent Children pretty much tarnished the game’s legacy, and I’d hate to see some hamfisted re-imagining full of unnecessary cutscenes and bad voice acting. Square Enix’s “celebration” (read, whoring) of FFVII a few years ago spoiled the game a lot, so I’m wary of them touching it again. I just don’t know if Squenix has the same mentality and ability to craft a charming story that it had when this game was first crafted.

Besides which, there are about ten billion other games Square Enix has on its plate right now. Has it ever heard of finishing one project before starting another?

Regardless, a VII remake will be a megaton announcement, so we’ll make sure to check back in VII days.

[Update: Some hidden artwork on the site has been discovered, and it’s beginning to look like Square Enix was yanking our chains again. The art style is possibly hinting at a Lord of Vermillion game. We’ll have to see, but it looks like VII fans may be disappointed. Again.]