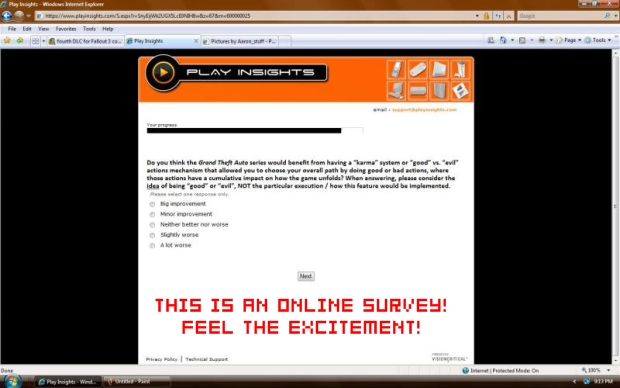 Think about every GTA game you’ve played. Now imagine what form of cockroach you’d come back as if karma was involved with them. Are there cockroaches born with cancer who have the heads shoved up their ass? I’m pretty sure that’s what any of the protagonists from a GTA game would come back as. I doubt that is what RockStar was thinking about though one they asked participants in a survey if they’d like a karma system in a GTA game.

The survey, which you probably can’t read because the image is to small, asks if people think that a karma system would make GTA a better game. People could answer between “big improvement” to “a lot worse.” The latter being where I would firmly land. In order for a karma system to really work in a game like GTA it would have to apply to the entire world meaning the random acts of violence would make you bad. Say goodbye to any fun if you want to be good. Maybe I’m wrong, but I always thought that the point of GTA was to let you be a total dick and bad guy? Did I miss the GTA about Bob Thompson, neighborhood watch officer?