Cosmochoria is a Kickstarter success story that is now about to see the light of day. It’s a mix of exploration and tower defense all wrapped up in a warming, yet occasionally stressful package. There’s a strong sense of wonderment to the randomly generated universe, and the art style is totally cute.

My time with Cosmochoria at PAX East brought a huge smile to my face, and if it wasn’t for an upcoming appointment, I would have played for probably an entire hour or so! 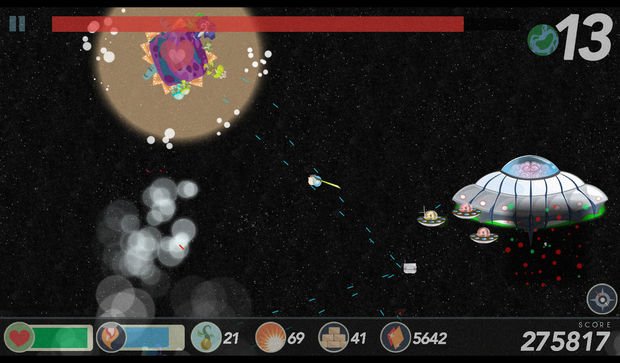 As Little Naked Guy With An Astronaut Helmet (I’m not sure he has a name), players are tasked with restoring randomly generated planets back to their beautiful selves. In order to accomplish this, Little Naked Guy With An Astronaut Helmet has to go around planting seeds and tending to them. After planting a seed, the player needs to hold a button down to tend to it, making sure that it is set to grow to its full potential. Once that is complete, the seed will slowly begin to grow. When they are done growing, they produce more seeds and the cycle can continue again.

Once enough seeds are planted, the planet is restored and everyone is happy! Well, except for all the evil aliens in space who are constantly trying to destroy planets and Little Naked Guy With An Astronaut Helmet. Luckily, seeds are not the only thing at his disposal. Little Naked Guy With An Astronaut Helmet can also plant and tend defensive towers, each with different properties, to help keep back the aliens. The function of each tower is rather simple to grasp and use, making it easy to feel confident while playing. Towers are not free, and if players don’t have the required resource, they cannot plant towers.

Without towers, Little Naked Guy With An Astronaut Helmet still has a weapon at his disposal. There are a variety of weapons to choose from before beginning (these may have been unlocked from other playthroughs) but once one is chosen, that’s it. I chose the shotgun, as I always do in games, and it was incredibly powerful. In fact, I rarely planted defensive towers and just focused on seeds and using the shotgun.

The enemies are pretty varied and the game seemed to do a decent job of introducing new ones as I progressed. Some enemies fly above the planet while others walk on the surface. The biggest struggle is managing the plants and avoiding incoming damage while simultaneously dishing it out. It’s a great back-and-forth that keeps the player constantly moving. Tending a plant gets very dangerous as more and more enemies head towards the planet.

Little Naked Guy With An Astronaut Helmet uses a jetpack to get around space, but fuel is limited. It will slowly regenerate in case players find themselves floating out in space like Bender in that one episode of Futurama. There are dangerous enemies floating in space as well, plus gigantic suns that will instantly kill the player if they get too close.

There are also little side-quests that can be discovered, such as delivering items from one planet to another. Hints of a story were also present, though they were definitely pieces of a bigger picture that I couldn’t experience in my limited time with the game.

Cosmochoria is currently on Steam Early Access, and available through Humble on the game’s site, and should be releasing very soon!