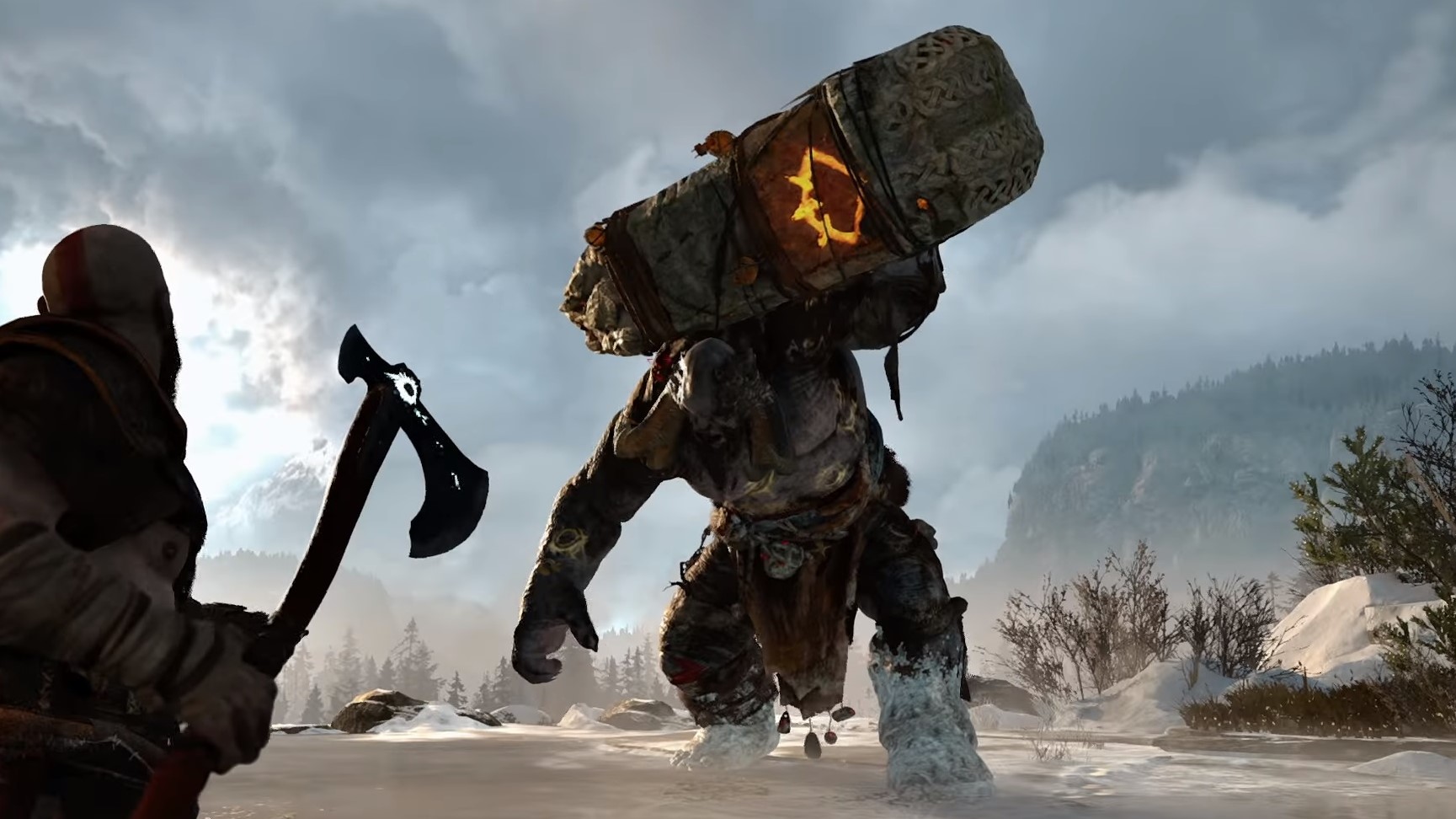 The God of War director’s GDC talk detailed his personal battles with doubt while making the game.

Cory Barlog, the director and recognizable face behind God of War, has won almost every Game of the Year award known to man. The celebrated title has dominated every award show it’s been a part of, from last year’s Game Awards to last week’s GDC Awards. When I saw he was giving a presentation I knew I had to go; not just because I have loved the series for so long and fell so hard for the latest installment, but because the talk was going to focus on dealing with self-doubt.

Self-doubt? From the awarding-winning guy who so successfully reanimated God of War? The one who always seems so cool and self-assured? I had to see it. I couldn’t stop wondering, what does Cory Barlog’s guide to self-doubt even look like? 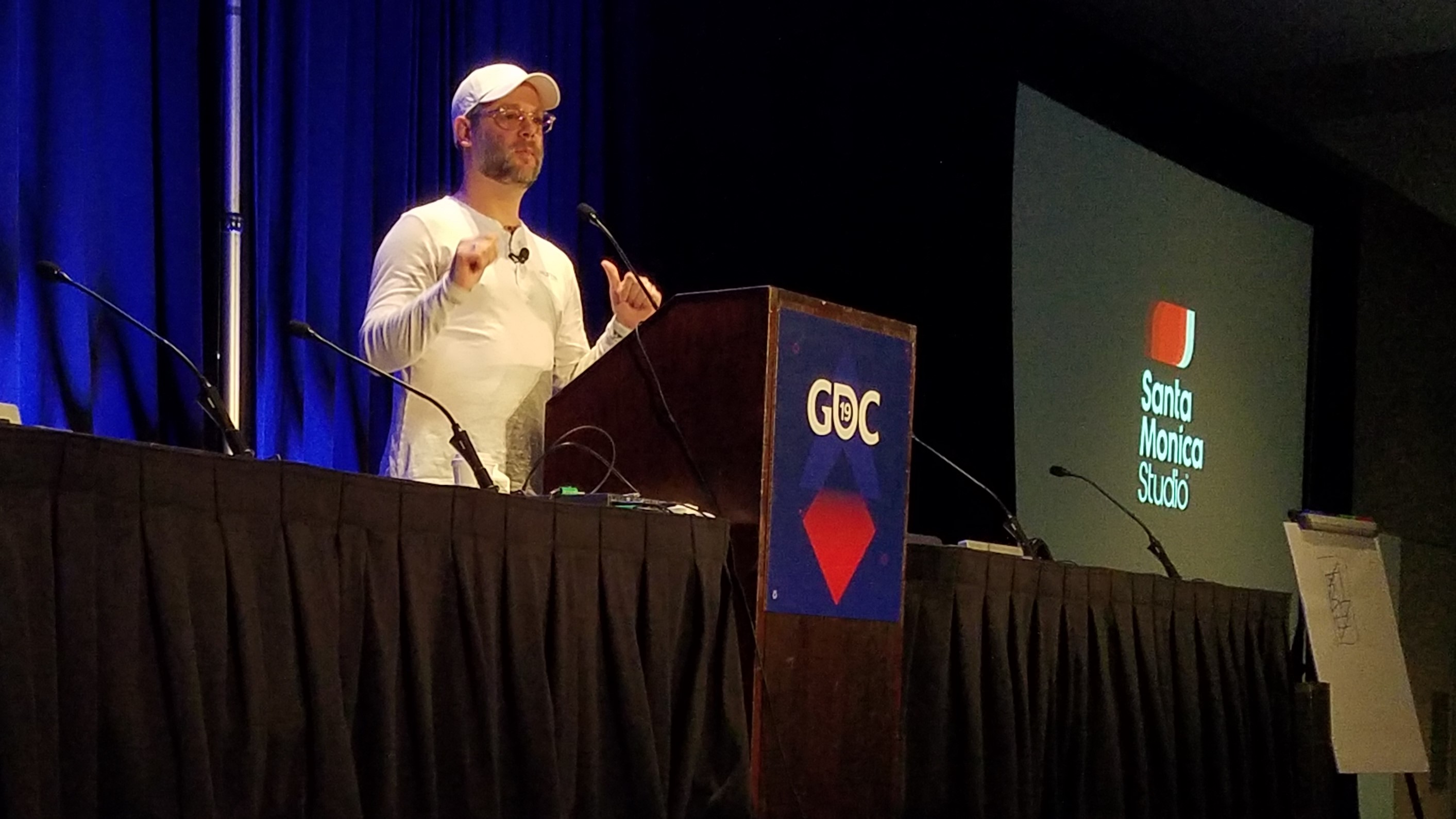 Knowing that his talk at GDC would be popular, I rushed to get to the conference as early as possible. My sleepy-headed determination scored me a seat smack dab in the front row, right next to the man himself. About twenty minutes before the talk was set to start, the people who foolishly didn’t start off at an ungodly hour began to pour into the room. The sudden human flood triggered the man accompanying Barlog to whisper what I can only imagine was a few words of encouragement. They didn’t hit their mark because, due to my awesome seat, I overheard Barlog laughingly exclaim, “Way to stress me out more, dude!”

The funny, private, interaction coincidentally highlighted the theme of the day’s talk: the stress and doubt that walked hand in hand with reinventing God of War. It was clear that even though he seemed like such a celebrity well-versed in public speaking, he was experiencing the same fear I would in front of the throng of people waiting for his talk. Funnily, the temptation of his celebrity proved too much for some audience members, who came up to request a selfie, and soon, there was a line forming in front of the God of War director. Far from being mad at the selfie-seekers, Barlog joked with them that they were helpfully distracting him from being nervous. It wasn’t lost on me that Barlog was demonstrating his point even before the presentation began. 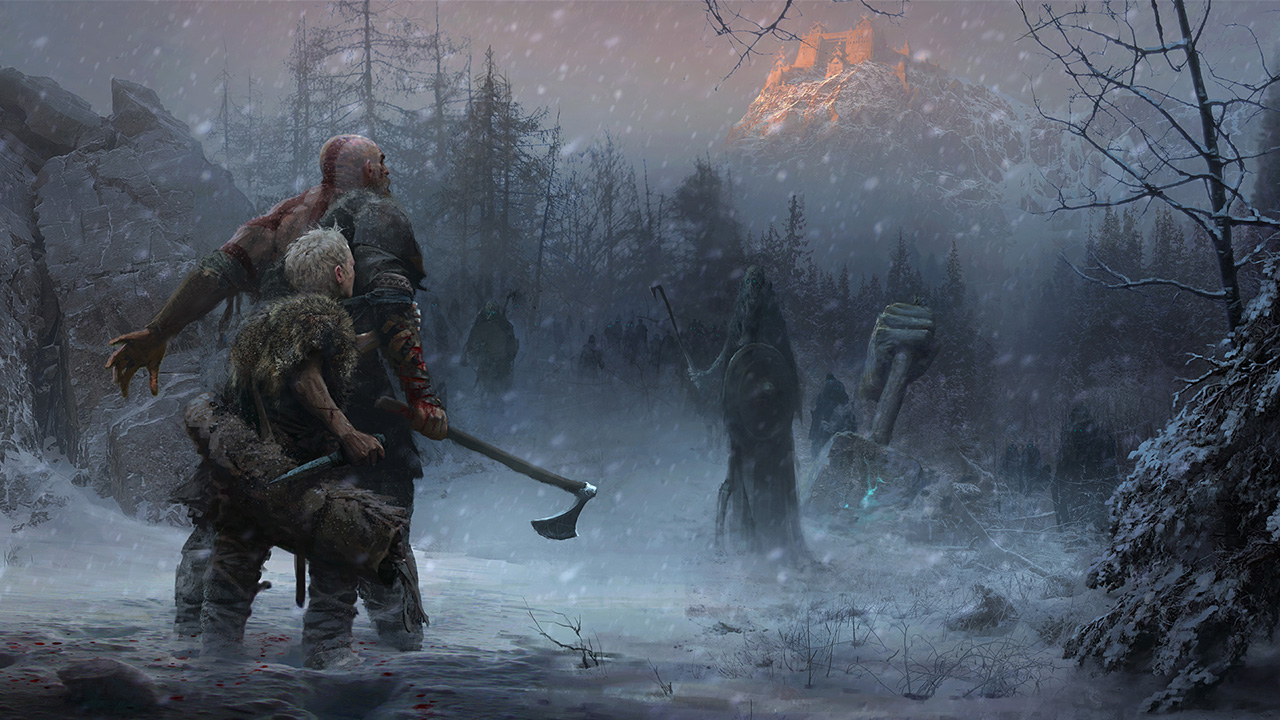 He started his self-doubt journey with pitching. According to Barlog, the roller coaster of doubt that was making God of War started when pitching to progressively influential Sony executives. He looked back on his original presentations and quickly pointed out to us that he had been right to doubt himself, they were bad.

“There was nothing of substance in that initial pitch,” he said and attributed his success to confident and bold arm gestures. He demonstrated these for the audience so we could use them should we ever find ourselves under-prepared while pitching to Sony, or, in general, just for persuading people you really are confident when you really don’t feel confident. Big arms, that’s the first lesson.

The second trick to battling doubt in Barlog’s repertoire is his humor. He earned a genuine round of laughter from his audience with a joke about every Sony executive having an “s” in their name and that, consequentially, he was changing his name to Scory SBsrlogssss. The laughter seemed to put him a little more at ease.

Even though Barlog mentioned he had nothing for his pitch, he assured us that, even if you doubt yourself, you have to fight for your vision and the doubtful voice in your head can actually help you with that. Even in this very early stage, he knew he would be leaving behind the Greek era of God of War to move forward into the Norse one. He also knew that it was going to be a reboot, but that the team would not be “re-starting anything.” Rather God of War 4 – in this early stage he didn’t want to confuse anyone by just calling it God of War – was going to continue and mature Kratos’s journey.

Cory explained that Kratos, “like us as a studio” was going to break the cycle. The new Kratos was not going to be the continuously raging Hulk he was in the first games, but instead, the tension of the story would center around Bruce Banner attempting to and sometimes failing at reining in his more destructive counterpart. Failure, or accepting its inevitability and getting back up, was the next tip from Barlog’s guide. 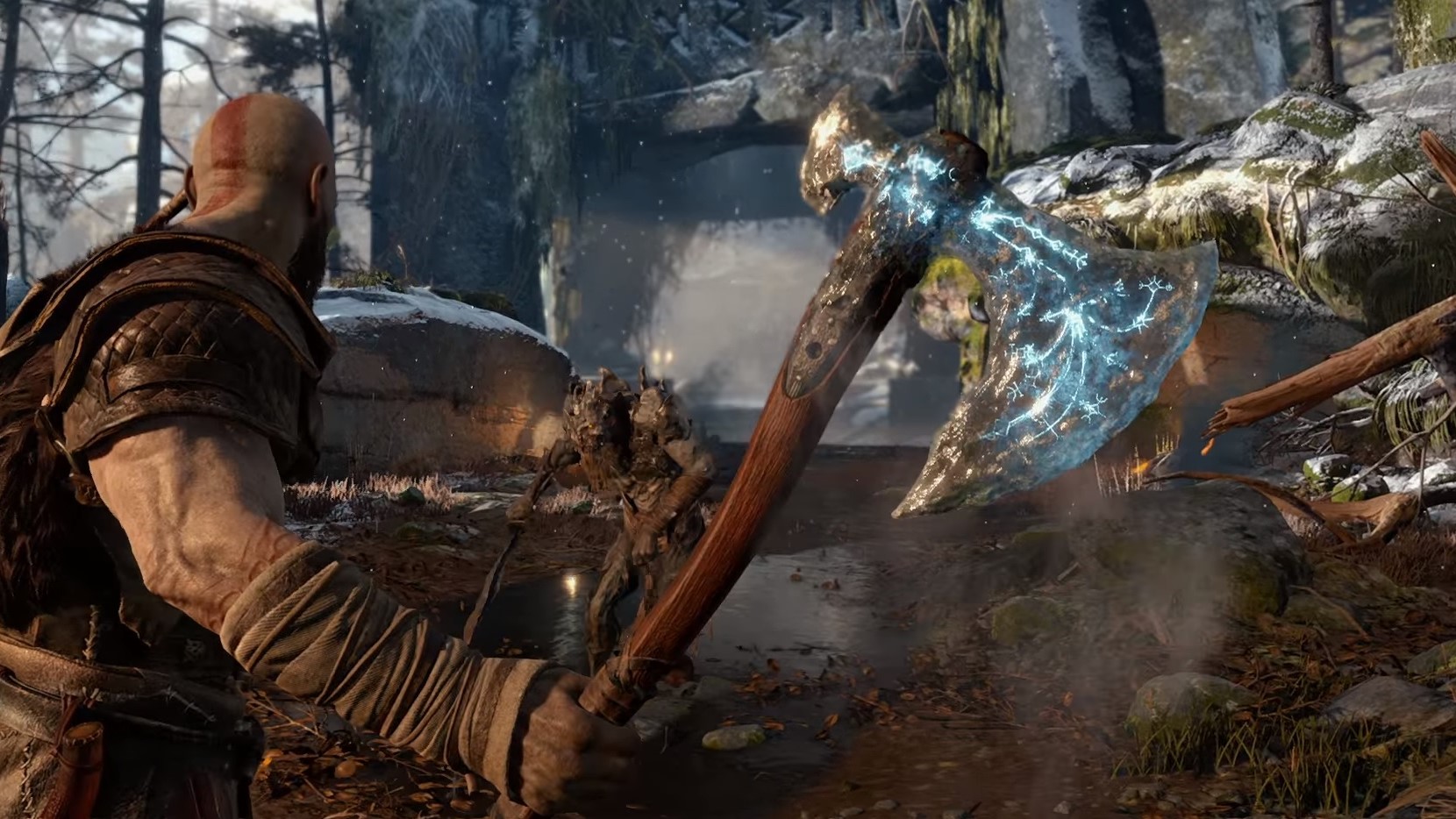 To give an example of when he should have listened better to his inner doubts, Barlog told the room about the stomach-twisting moment when he realized his E3 demo pitch was taking a nose dive. As he told it, the gathered E3 producers “started fidgeting in their seats,” within five minutes and, looking at them, he knew his presentation was about to bomb, despite his ever-increasingly bombastic hand gestures. This, he explains, is the moment he was honest with himself that while making the E3 reveal, he’d had the feeling that “this wasn’t very good,” and that it was, “so cheesy.” So, instead of accepting failure, he listened to that voice and asked to pitch again, to a reluctant crowd.

Highlighting his point, Barlog later warned us not to “demonize failure. We all fail, we are going to continue failing. It is about getting back up after that failure, learning from that failure, and keeping moving forward. That is the learning experience. Everything we do, especially large endeavors like this, is about constant failure, right?”

He explained that the root of his problems began when he got distracted by the, admittedly cool, but largely unimportant details. Things like the god’s political scheming started to overtake the core of the story, the relationship between father and son. So, he scrapped his uninspired original demo, which was going to show Kratos and Atreus battling through the mountain interior with a large boss screaming at the end, and decided to instead depict the more thoughtful hunting scene we actually saw at E3 2016. 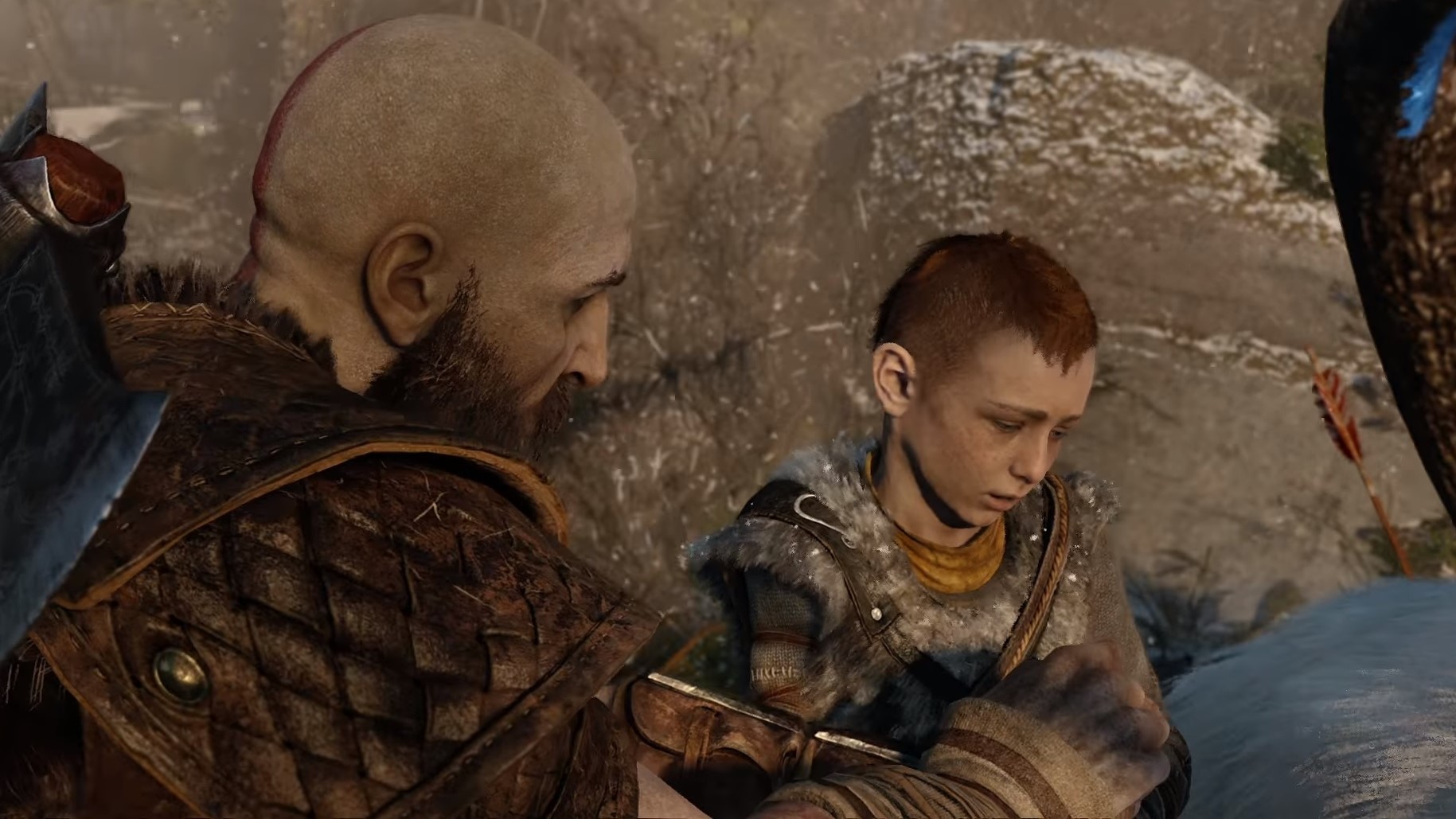 Everything about the E3 demo amplified Barlog’s self-doubt. They were revealing their game for the first time to an unsuspecting audience of gamers and game critics alike, but nothing for the actual game was close to being done. The engine was still being built, the lighting wasn’t set, the God of War team hadn’t even fully figured out the art direction yet. What could go wrong?

For E3 2016, unlike previous years Barlog had participated, the show curators insisted everything be prepared and submitted two weeks ahead of the show. That gave him two weeks to imagine everything that could go wrong. He insisted that it was like, “flying a plane while it was being built, and while making the blueprints for the plane.” In what seems like a situation tailor-made to amp up stress, Barlog told us about the rehearsals for the big show. In order to be ready for any eventuality, each E3 presenter had to rehearse the speech they would give if everything were to crash and burn. So, just before his nerve-wracking presentation, Barlog had to stand up on the stage, facing row after row of empty chairs, to practice the apology he might have to give if his demo completely fails. “The important thing about all of this,” Barlog summarizes, “is that I was experiencing doubt the whole way.”

The final piece of advice from Cory Barlog’s guide to conquering self-doubt, and what he had to do that day at E3, is this: it is up to each of us at every step of the way to push through every self-doubt that confronts us. When we do push through that wall, and we inevitably find another wall, we have to push through that too. Keep repeating that process, and you will get through it. 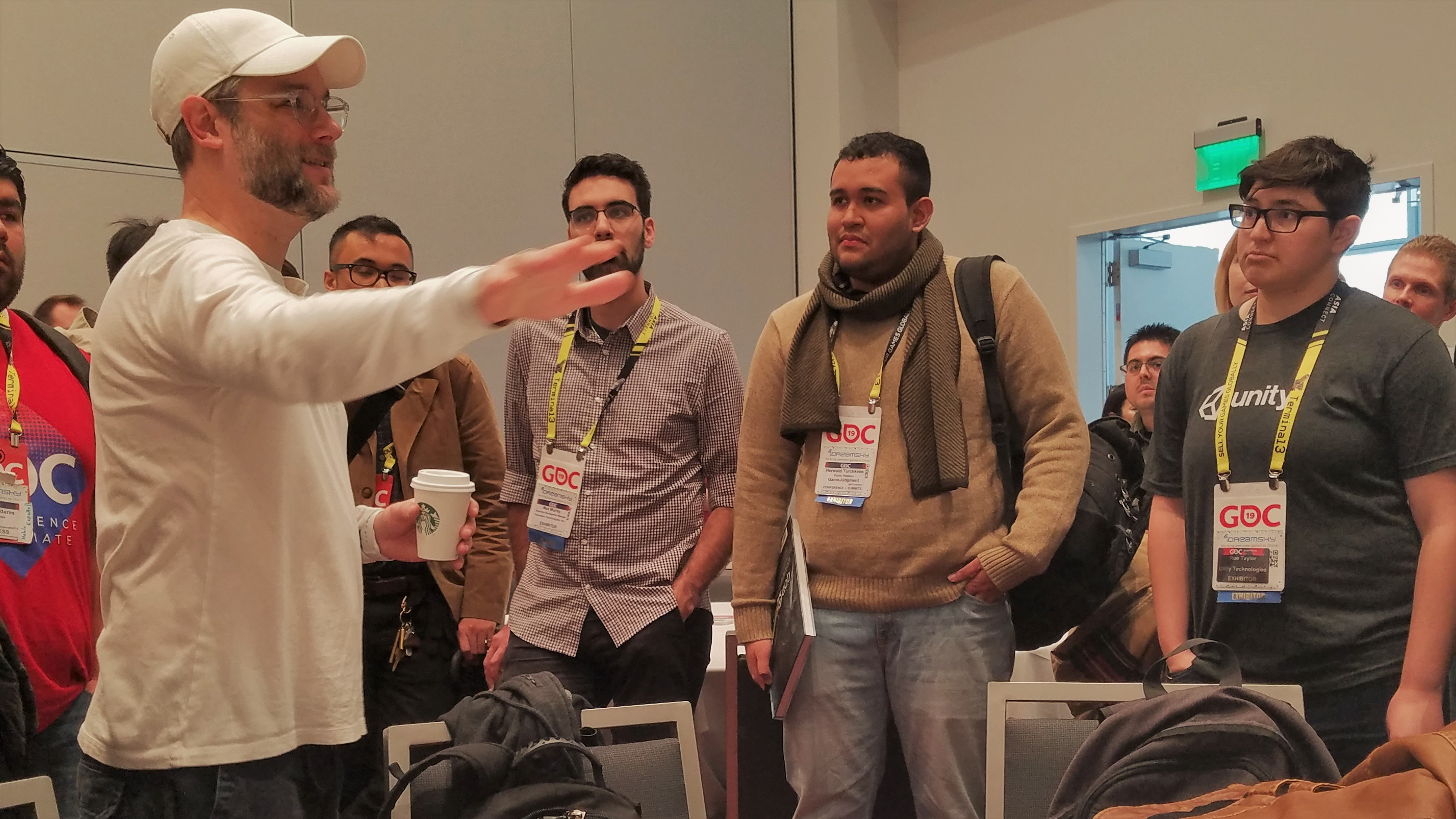 After wrapping, Barlog took some time to walk to another room with a small group of us with more questions. What most people in his overflowing talk didn’t hear was a fantastic summary to his presentation. A crowd member asked him to talk a little more on his thoughts about self-doubt to which Barlog responded, “Failure is the gasoline for doubt. It is the thing that’s flaming that doubt up into this huge bonfire that’s telling you ‘you suck!’ You have to process it, but then stamp it down and move on.”

He also advised the crowd not to “ignore [doubt], don’t compartmentalize it and pretend it’s not there. I tried doing that for years. That shit tore me up because it was still always there. It was still screaming, and I wasn’t listening to it and processing it. Fifty percent of the time, that doubt is actually right, and that’s the bitch of this whole thing. You have to be open to figure out the thing you’re going to need to change.”

Filed under... #GDC#God of War