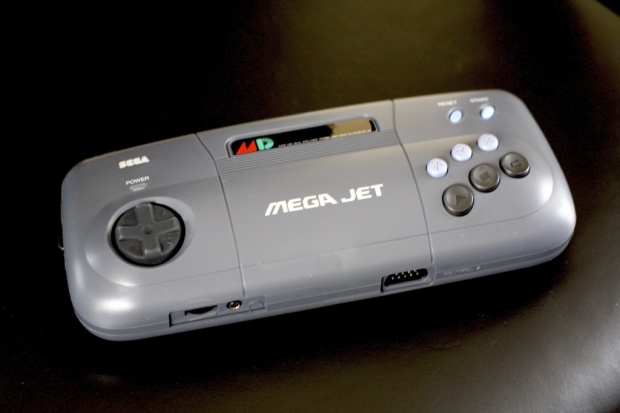 I’ve always wanted a Sega Mega Jet, though I could never tell you why. It’s just a unwieldy controller with a Genesis/Mega Drive built in. It’s got a d-pad, six buttons, and a cartridge hole in the top. But no screen. You’ll have to connect it to your television…just like your Genesis, but with a worse controller. Or call it a Sega Nomad without the screen and dogsh*t battery life. Wow, I just kind of talked myself out of it. And the $249 price on eBay helps a bit, too.

As a Saturn whore, I want this SGX system, too. It’s like a big-assed Saturn in a black PC-ish box. It holds multiple games, each of which can be chosen from a special remote. Think of it as a CD changer for old-assed CD-based games, complete with a lock and key so that no one can steal your eroge. The pictures in this auction make it look pretty new. But $300? I dunno.

These links come from one of my favorite blogs, GameSniped. They also link us to Nintendo’s Dolphin (Chad!) development hardware and an old Street Fighter II talking electronic piggy bank.

I need more money to buy this useless crap.