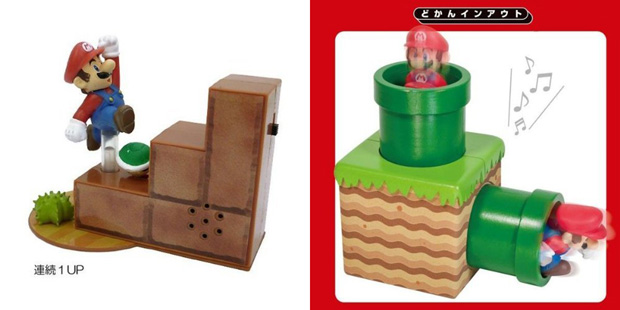 Keychains are one thing, but these? Now you’re playing dirty, Japan!

A pair of New Super Mario Bros.-branded figurines were released recently in Japan. These sets produce sound to recreate two very iconic moments in Mario history. The one on the right plays the warp jingle as Mario enters one pipe and emerges from the other. However, it’s the one on the left that catches my eye — a diorama of Mario stomping a Koopa Troopa shell against a staircase to rack up infinite 1UPs. Incredible.

Both items are available on Amazon Japan for a respectable 777 yen (about $10) apiece. Of course, you’d need to order through a proxy service if you want these delivered outside of Japan. I need to get me the 1UP set, like, yesterday.

Filed under... #Cooler than the other side of the pillow#mario#Offbeat#toys