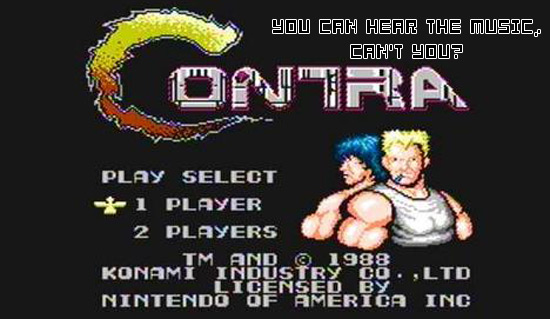 Konami just sent us a press release detailing their plans to drop Contra 4 into everyone’s favorite handheld, the Nintendo DS, sometime during 2007. The release will celebrate the 20th anniversary of the series, and the four billionth time I’ve listened to the Minibosses cover of the original theme.

The game itself will be a sequel to the spectacular Contra III: The Alien Wars and, as the DS presents a rather bizarre landscape for a series traditionally confined to left-to-right movement, the press release gives rather cryptic details about “massive boss battles as players try to seek and destroy the weak points of sky-high enemies”. I could see that going in a horrible direction, but assuming Konami doesn’t try to unnecessarily shoehorn in usage of the stylus (possibly as a missle), I’m anticipating this title almost as much as many of you are anticipating pubic hair.

Contra 4 takes place two years after the events of Contra III: The Alien Wars. After saving earth from invasion by Red Falcon, Bill Rizer and Lance Bean are confronted with a new extraterrestrial menace: the terrifying Black Viper. Joined by hard-boiled mercenaries Mad Dog and Scorpion, the warriors must once again wage war against an entire army of invaders.

Refining the 2D side-scrolling genre the series established 20 years ago, Contra 4 delivers pure action at a fever pitch as players jump, shoot, and dodge oncoming hazards. Utilizing a new dual screen presentation, the action spans both screens of the Nintendo DS, giving players the opportunity to battle across expansive environments in which death can come from any direction. The use of both screens for the game’s core action also allows for massive boss battles as players try to seek and destroy the weak points of sky-high enemies. A first for the series, Contra 4 introduces a grappling hook accessory that lets players grab onto elements of the environment directly above them. Whether using it to avoid oncoming dangers or attack from a strategic vantage point, the grappling hook allows for new combat situations and dramatic set pieces that underscore the game’s adrenaline-soaked pedigree.

Continuing the multiplayer tradition of previous games in the series, Contra 4 lets two players battle together against Black Viper’s army of vile alien forces and reclaim Earth for mankind.

Developed by WayForward Technologies, Contra 4 is planned for release on the Nintendo DS in 2007. For more information on the game and the Contra franchise, please visit: www.konami.com.

About Konami
Konami is a leading developer, publisher and manufacturer of electronic entertainment properties. Konami’s titles include the popular franchises Metal Gear Solid®, Silent Hill®, Dance Dance Revolution® and Castlevania®, among other top sellers. The latest information about Konami can be found on the Web at www.konami.com. Konami Corporation is a publicly traded company based in Tokyo, Japan with subsidiary offices, Konami Digital Entertainment, Co., Ltd. in Tokyo, Japan, Konami Digital Entertainment, Inc. in the United States and Konami Digital Entertainment GmbH in Frankfurt, Germany. Konami Corporation is traded in the United States on the New York Stock Exchange under the ticker symbol KNM. Details of the products published by Konami can be found at www.konami.com

Filed under... #Contra#Cooler than the other side of the pillow#DS#Konami