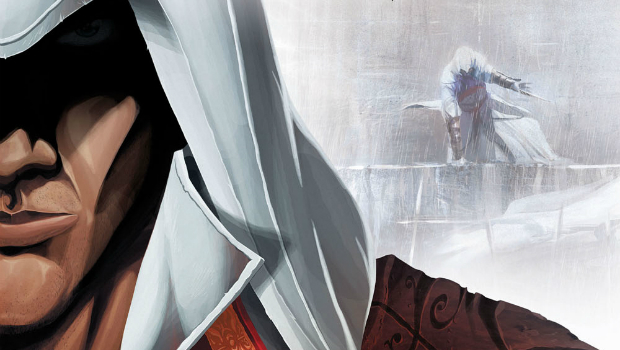 Available for the first time in English

Our friends at Titan Books have sent us three copies of the Assassin’s Creed graphic novel trilogy to hand out to the Destructoid community! These hardcover books — available here for the first time in English — tell the tale of Desmond and the Templars from a whole new vantage point, and add a ton of new detail to the Assassin’s Creed universe!

To secure a copy of the trilogy for yourself, just leave a comment below detailing your favorite moment from any Assassin’s Creed game! Limit one comment per person, and you have until this Sunday, January 27 at 11:59 PM Pacific to enter. Open to US and Canadian residents only, unless you’re willing to cover your own shipping costs.

Assassin’s Creed – Desmond
This first volume of the French comic trilogy from Ubisoft, tells the story of Desmond Miles’ abduction by Abstergo and their plans to rip the blood-steeped memories of Desmond’s ancestors from his genetic code. Add to the mix the mysterious and violently terrified Subject 16 and a desperate flight from Abstergo, and this makes for a fast-paced and thrilling addition to the game’s universe.

Assassin’s Creed – Aquilus
Second volume of the comic trilogy from Ubisoft. Escaped from Abstergo with the help of Lucy, Desmond joins the Assassins in their fight against the Templars. But, betrayed by Patient 13, the Assassins leave Rome for Monterrigioni. On the way, Desmond uses the Assassins’ animus to visit the memories of his ancester Aquilus, a Roman citizen fighting those who would become the Templars.

Assassin’s Creed – Accipiter
Following on from Desmond’s previous foray into his ancestral assassin-past, Aquilus desperately strives to avenge his father’s murder. His thirst for revenge leads him to Rome, and sets him on a quest for the mystical Ankh as the savage Barbarian tribes, led by the deadly Assassin Accipiter, prepare to descend upon Lugdunum. Desmond, meanwhile, must also fight stay alive in the present day.