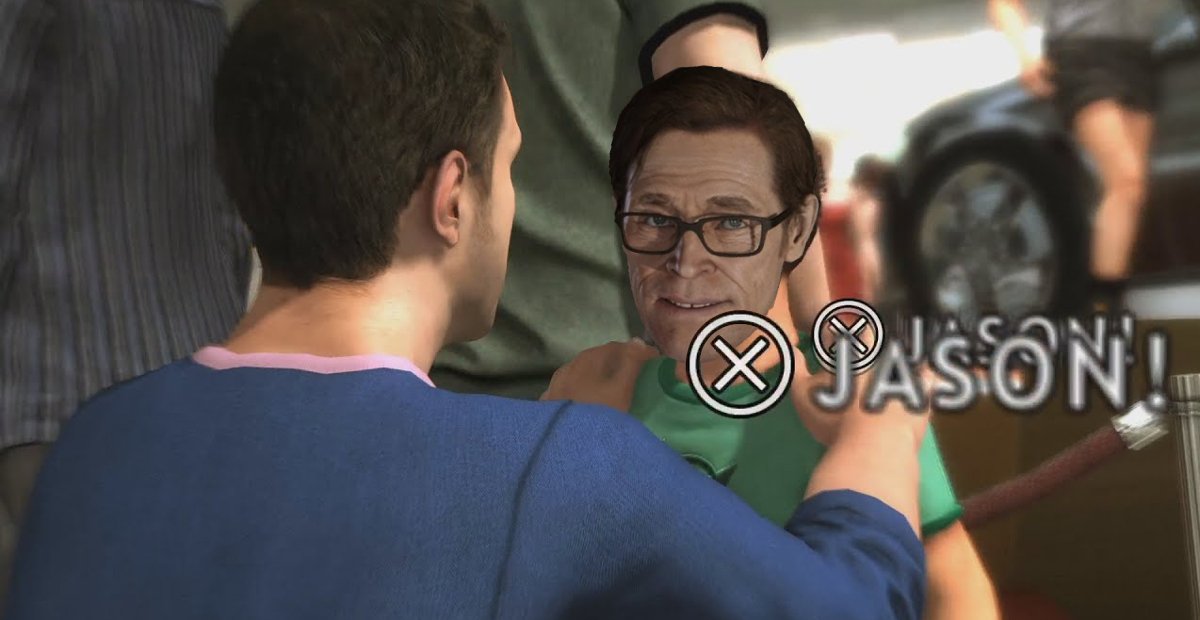 A few weeks ago we gave you kind folks a small taste of the raw EMOTION of Quantic Dream’s games. Today, we’re back with another round to let you into the strange, uncanny valley world that I’m pretty sure no other studios want to make, let alone would if they could.

We’ve got some bundles featuring PC copies of Beyond: Two Souls and Heavy Rain so you can get your Dafoe and your JASON!!! on, right in the comfort of your home. Press X to Enter!

I’m going to give a trailer for each game and some press. So yeah read and watch and listen and love.

HEAVY RAIN: Play four different characters in this tension-soaked psychological thriller. Choose your next move carefully, as every decision may have dramatic outcomes. Spanning four days of mystery and suspense, the hunt is on for a murderer known only as “The Origami Killer” – named after his macabre calling card of leaving behind folded paper shapes at crime scenes. Each of the four characters follow their own leads, with their own motives. Directing their very actions, you have to prevent the killer from claiming a new victim. How this story ends is entirely up to you… This acclaimed game, previously only available on PlayStation consoles, is brought to PC with stunning visuals including 4K resolution, widescreen compatibility, and 60 FPS frame rate.

BEYOND: TWO SOULS: A unique psychological-action-thriller featuring A-list Hollywood performances from Ellen Page and Willem Dafoe, Beyond: Two Souls takes players on a thrilling journey across the globe as they play out the remarkable life of Jodie Holmes. Born with a connection to a mysterious entity with incredible powers, Jodie is different. Players’ actions will determine her fate as she faces extraordinary challenges, danger and heart-wrenching loss on a journey to discover the truth of who she is. Players will be able to experience the entire Beyond: Two Souls story, complete with “Advanced Experiments” downloadable content and featuring stunningly optimized visuals, including 4K resolution, widescreen 21:9 compatibility and 60 fps frame-rate. Jodie’s story can be played in either cinematic or chronological order, and players can share the experience with a friend in local co-op mode.

Ok, so I haven’t actually played Beyond, but I’ve owned it for like six years. Does that count? Who knows. Heavy Rain is a true classic, though. It’s perfect in every way, except for all the ways it’s not. You’ll understand soon, my friend. Just ignore all the naysayers and roll with it. I mean, if you win it’s free, anyway, so yeah.

To enter to win, comment below telling us what happens when you press X. Will you pay your respects? Will you JASON!? I simply must know.

We have two bundles to give away; keys are redeemed through the Epic Games Store. Winners will be drawn on Wednesday, August 28. Don’t have a Dtoid account? Press X to sign up and join in on the fun.

Beyond: Two Souls and Heavy Rain are both available for PC now, exclusively through the Epic Games Store. Head over to PC Invasion for more chances to win!