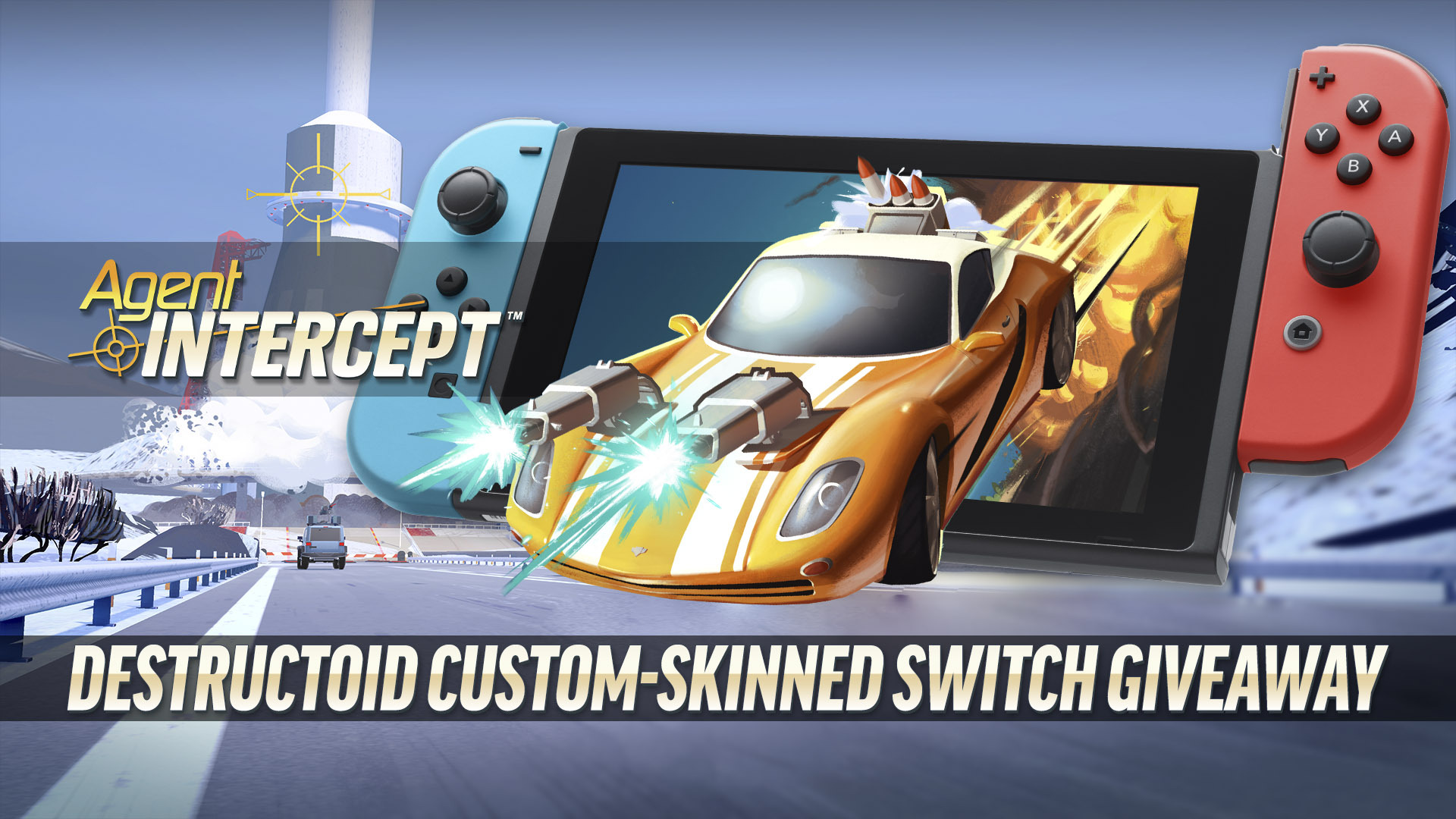 10 runners-up will win a Switch key!

ATTENTION: Destructoid is in possession of a custom-skinned Nintendo Switch console, and your mission, should you choose to accept it, is to win it! Aren’t I super cool with my super relevant references? But seriously, developer PikPok is dropping their latest console game, Agent Intercept, and they’re kicking in the door like the Kool-Aid Man by giving away a brand new Switch console! When I dropped my first console game, Super Hot Dog Bun Racing, I tried giving away my Olive Garden leftovers but no one seemed to care. I probably should have given away a Switch, too.

Fix your eyes upon the official summary. I’ll provide commentary at a later date.

Jump behind the wheel of the Sceptre, a sleek spy car with an arsenal of high-tech weapons and the ability to instantly transform into different vehicles. Blaze across land, sea, and sky on dangerous missions to stop the nefarious organization CLAW and save the world from total destruction! Dodge enemy fire, mines, and lasers while performing over-the-top stunts and racking up points with classic arcade-inspired controls. It’ll take all the Sceptre’s firepower and cutting-edge technology to uncover CLAW’s secret plots and stop them once and for all.

Progress through three escalating chapters in Campaign Mode, where CLAW’s nefarious plans threaten the very foundations of the world itself. Complete thrilling, action-packed sequences punctuated by setpiece boss battles and uncover a story full of espionage, mysterious characters, and enough high-tech weaponry to challenge even the most seasoned spy.

Dive deeper into the life of a secret agent by completing side missions, unlocking secret experiments, and enjoying endless replayability with three Score Attack modes. Take aim in Target Practice, push the Sceptre to its limits in Time Trial, and claim the top spot on the Highscore Chase global leaderboard! With a high-energy original soundtrack and art inspired by beloved spy fiction, Agent Intercept’s emphasis on action creates an experience unlike any other.

PikPok decided the best way to promote the game is to give away a brand new, custom-skinned Switch console! We don’t yet have a mockup of what the skin looks like on the unit, but here’s an artist’s* render. (*I’m the artist.)

Again, this isn’t the final prize, but I’m sure it’ll be more or less the same. Mostly. That’s right, today you can win a brand new Switch console! We’ve also got Switch keys for 10 lucky runners-up. If you’re entering for just the console which you don’t have, and win a key for a console you don’t have, then the fates have truly aligned. Write the key on a bathroom wall at Wendy’s and complete the Circle of Life.

We have one grand prize winner who’ll get the console and a key for the game, as well as 10 runners-up who’ll win a Switch NA key. There are no substitutions for any prize. Not even if you ask nicely. As this is a physical prize, you’ll need a United States shipping address to qualify for the grand prize. Or at least, the vendor will only ship to a United States address. We can’t control where it goes from there. Bake it into a birthday cake and send it to prison, for all we care. We’ll draw winners around this time next week.

Agent Intercept is available NOW for Nintendo Switch and other home consoles.