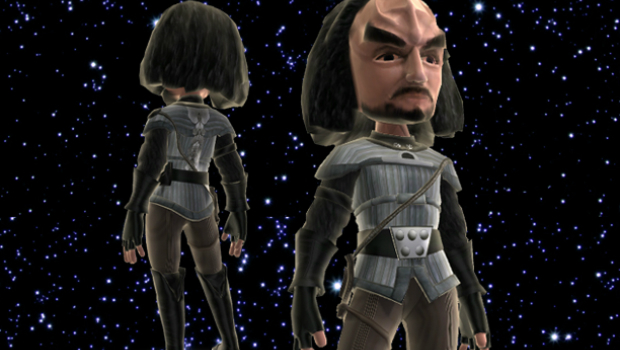 Celebrate the launch of Star Trek: The Next Generation Avatar items on Xbox Live

Our friends at Flashman Studios recently unveiled an awesome new line of clothing, costumes, and accessories for your Xbox Live Avatars. (If you’re into that sort of thing. Which I am. So shut up.) The new set lets you dress up as your favorite Star Trek: The Next Generation character, be it a Klingon, a member of the Borg Collective, a fateful Red Shirt, and more! (Did I mention OMG Geordi’s visor?!)

To mark the occasion, they’ve given Destructoid a ton of Star Trek-themed swag to hand out to lucky readers! Included in the prize packs are some real-life Star Trek costumes, Season 1 of TNG on Blu-ray, the TNG soundtrack, Microsoft Points, and more! Hit the jump for all the details, and instructions on how you can win!

To win one of the ten prizes below, you need to write a Star Trek-themed poem in the comments. Haiku, limerick, sonnet — whatever’s clever. Here’s one I just came up with:

Captain Kirk, Mr Spock and Uhura
Beamed down to the planet Centura
Red Shirt Rico was scared
His life wouldn’t be spared
When Kirk said it was an aventura

(Finally putting that creative writing degree to good use!)

The best poem (based on my judgement) wins the grand prize below, second and third best will take home those respective prizes, and seven runners-up will win Microsoft Points cards worth $5. You have until this Friday, June 7 at 11:59 PM Pacific to enter, and the contest is open to US residents only. Good luck!

Here are the prizes:

*The Star Trek The Next Generation soundtrack prizes are courtesy of La-La Land Records. Visit them at www.lalalandrecords.com.