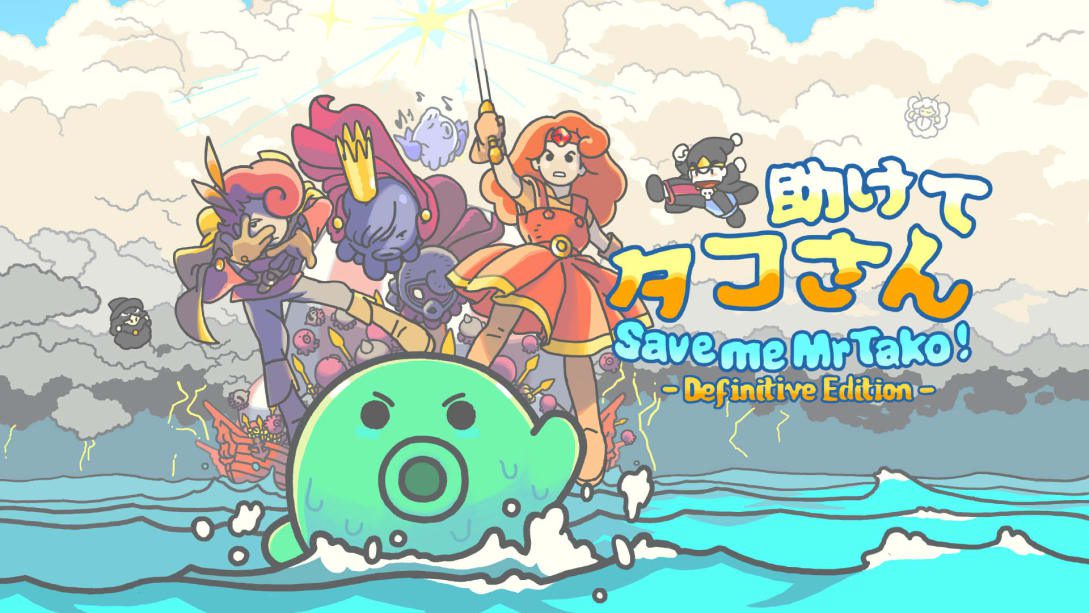 In today’s contest, you can win a copy of Save me Mr Tako: Definitive Edition for Switch or Steam!

Back when it originally launched, Save me Mr Tako was a really cool game that paid homage to the Game Boy. It looked and played the part well, but it was held back from being an easy recommendation by a handful of small annoyances. If you’re curious about my full thoughts on it at the time, you can read them here in my review.

The point is that the game had some issues at launch, and Christophe Galati, the creator, wanted to address them at the time with updates. Unfortunately, the game’s publisher, Nicalis wasn’t willing to pay for it, so it seemed unlikely to happen. Over two years later, however, Galati managed to part ways with the publisher and rereleased it with the intended updates last month as Save me Mr Tako: Definitive Edition.

Based on the implemented changes detailed over on Galati’s Patreon page, it seems like the majority of the issues I had have now been addressed. The camera behavior, game physics, and level design have all been tweaked to answer complaints from fans. Three difficulty modes have also been added, which can be switched between mid-game. One of them is even a “Classic” mode, where you can play it in its original form. If you want that old school challenge, it’s still there. However, the other two modes sound much more forgiving for folks just looking to have a chill time.

The big caveat to all of this is that owners of the original game didn’t receive the Definitive Edition as a free upgrade to their existing copy. Due to the publisher change and delisting of the original title, that just wasn’t possible. It’s unfortunate but understandable. Luckily for you, we’ve received a few copies of the Definitive Edition to give out to you dorks!

Here’s a brief summary of what Tako is all about for the uninitiated:

In a world where humans and octopuses are at war, Tako is a pacifist little octopus who rescues a woman from drowning one stormy night. A fairy sees this act of bravery and grants him the ability to survive on land. As he travels across the world, Tako defies his family and his people to try to resolve conflicts between humans and octopuses, plunging him into the very roots of this dysfunctional world.

Tako will solve puzzles, turn enemies into platforms by spitting ink at them, explore mysterious dungeons and fight tenacious bosses on his mission to end the war between the undersea Octopus kingdom and the terrestrial Human realm. Will you help this brave octopus to spread his message of tolerance and teach both species to coexist in peace and unity?

To enter, comment below telling us your platform of choice and what your favorite cover art is from the Game Boy catalogue. I remember walking through the video game section at Toys”R”Us as a kid, and they had this huge wall full of games. The thing was that they didn’t have fancy demos or anything. I couldn’t actually try them out first, so it was all just sort of guess work. I had to make my choice based on a picture of the cover art and a brief description that may or may not be accurate. Once I finally picked one, I had to grab a paper ticket, proceed to the register, and pray I had made the right decision. Needless to say, they were not all winners, but a lot of that cover art was still pretty dang wonderful.

We’ve got two Switch (NA) keys and two Steam keys up for grabs. We’ll draw the winners on June 16, 2021. I’ll respond to their comments asking them to send me an email over at [email protected] in order to deliver the key, so keep an eye on those Disqus notifications!

Save me Mr Tako: Definitive Edition is available now for purchase on Switch and Steam.