Today’s episode of Constructoid is a little different. For starters, it’s longer than the two previous episodes put together. That’s largely because my two guest panelists (Bayonetta and Princess Peach) are the characters actually on the receiving end of the criticism this time. It’s a full-on dialog here; people bare their souls. It’s intense.

I also wanted to shortchange neither the panelists nor the topic. Just like religion, politics, and race, talking about gender can really flip a switch in people. If people get the sense that you are on “the wrong side” of the argument, they will start to see you as “the enemy” and all potential discussion gets thrown out the window, replaced with spiteful intent and hateful name-calling. I’ve seen it happen all too many times before.

That’s part of why I tried really hard (maybe too hard) to be totally clear in my points here, which caused things to go a little long, but even now I’m sure that I’ll be either intentionally or unintentionally misunderstood by somebody. I’ll be lurking the comments to try to clear up any misinterpretations that I may end up causing.

I also wrote a lengthy text-based feature on the topic below. If video isn’t your thing, I still have you covered. So are you ready? Lets get to this!

Let’s start with a story. I was taking an art class about ten years ago, and one of the assignments was to create a visual metaphor to express the idea of  femme fatale. I drew a curvy knife that looked like a naked woman’s body. I thought it was crude, but hopefully a little bit clever.

When it came time to grade it, of of the professors on my year-end critique reamed me out. She said that my image was one of the most sexist things she’d seen in a long time — that equating a woman’s body to something dangerous, to equate her sexuality to something that kills — was totally misogynistic. I know that wasn’t what I was trying to say with that image, but what matters to me is that’s what my professor heard.

Of course, by that professor’s definition, the whole idea of femme fatale is pretty misogynistic. I wracked my brain for ways to visually sum up “A woman of great seductive charm who leads men into compromising or dangerous situations” in a way that didn’t imply that women use their sexuality to hurt men. I don’t think it’s possible.

I feel like that’s what’s going on with a lot of game developers in their efforts to create “successful” female videogame protagonists. As game developers are a largely male group, they usually can’t speak to their own experience in crafting a female character, so all they have to go on is what they’re taught will resonate as “female” in our culture. 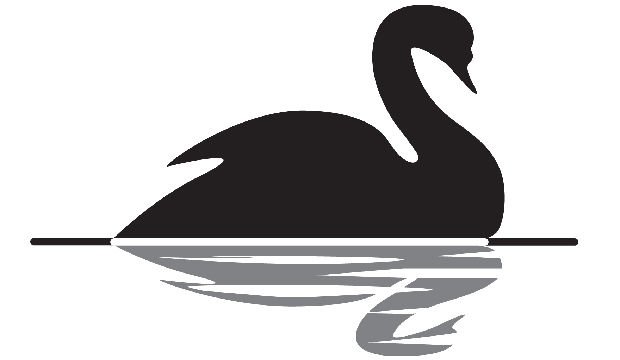 This transformation can happen at any time, but what’s important is that it happens. For instance, Bayonetta starts off her game as a nun, but with in the first ten minutes, she’s gets all her clothes ripped off, and for the rest of the game she’s an angel-killing, gun-toting sexpot. Samus from the Metroid series is another, more subtle example (though just about anything is more subtle than Bayonetta). It usually takes Samus a little longer to strip down to a pin-up girl posture in her games, but it almost always happens at some point or another.

We see the same thing in pop culture as a whole. “Girl” pop stars like Britney Spears and Miley Cyrus start of sexless, then a few years into their careers, they become “women,” and the sex comes out (usually by the bucket). It doesn’t just work for pop stars either. Presenting yourself as “a regular, innocent girl” then planting a sex tape on the internet is a sure way to get your own reality show. Innocence sells, sex sells more, and the transformation from sexually repressed to sex machine sells the most.

There are a couple of reasons why that may be true. The most obvious reason is that in nearly every culture, for almost as long as recorded history, women have been put into either the sexually chaste role of “mother/daughter” or the sexually charged role of “mistress/lover.” Combining the two roles makes for a simple character arc for a woman in any story, one that will presumably resonate with the majority of the population.

There is also the idea that sexual expression is more genuine and intense from someone that was once sexually chaste. That’s true for both men and women. I know a lot of women that love the idea of (usually gay) men repressing their sexuality due to fear of rejection or being socially ostracized, only to eventually “give in” by unleashing the full force of their sexuality (usually on another man). In short, it’s one thing if someone who has been stripping all their lives gives you a lap dance, and it’s another thing entirely if someone who normally keeps their sexuality bottled up sudden starts grinding on you.

For women, I’m guessing that the transformation from “sex-free good girl” to “sexpot bad girl” might resonate in a different way. Women are still sexually repressed in most cultures. Girls are taught from an early age that sex is scary and dirty, that if a girl gives into her sexual urges that she is endangering herself, or maybe worse, her family’s reputation. Then there’s the whole “sex is a sin” thing that women of certain religions have to deal with. The list goes on and on.

With that in mind, it makes sense that some women would look up to someone like Bayonetta. She defies the idea of sin from the start (I’m pretty sure shooting angels in the face is a sin). She’s as sexy as she wants to be, as mean as she wants to be, and as tough as she wants to be, all on her own terms. If our society equated “sexually repressed” with being “good”, then of course people are going to want to be bad, because bad feels a hell of a lot better. I think it’s pretty obvious that Bayonetta is having a lot more fun that Peach is. 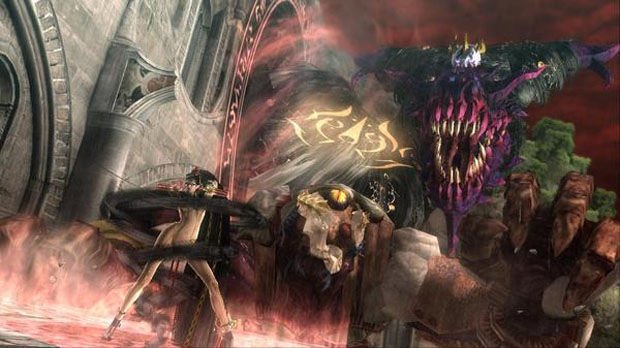 One of my many problems with this whole “sexy bad girl” deal is that it still buys into the idea that a woman’s sexuality is bad. It may look like Bayonetta is living by “her own terms”, but she’s still buying into the whole “sexy bad girl/chaste good girl” trap. Like my old art professor said, equating a women’s sexuality with evil and danger is not all that empowering. If anything, female characters that pair violence and sex only validate those of us who would tell the world that a woman’s sexuality is “scary” and “bad.”

From a more personal perspective, I can say that the “sexy bad girl/chaste good girl” routine has become boring at best, and painfully distracting at worst. I mean, is there anything more formulaic at this point? After a while, I start to tune out formulas without even thinking about it.

Sometimes it’s worse is when I can’t tune out the “sexy bad girl” stuff. I tried to tune out Bayonetta’s constant sexual behavior while playing her game, but I couldn’t. Her constant orgasmic moans and protruding lady lumps were so distracting, I could barely focus on the rest of the game. Sure, her over-expression of female sex-power was funny at first (in a Ron Burgundy sort of way) but it got overwhelming fast. How can I pay attention to the rest of Bayonetta’s character when she’s acting like swollen-assed baboon in heat for the entirety of her adventure? I like cheese on my pizza, but if it’s six inches thick, then you’re not doing to be able to taste anything but cheese.

That’s what happened to me when playing Bayonetta. I was overwhelmed by the cheese. 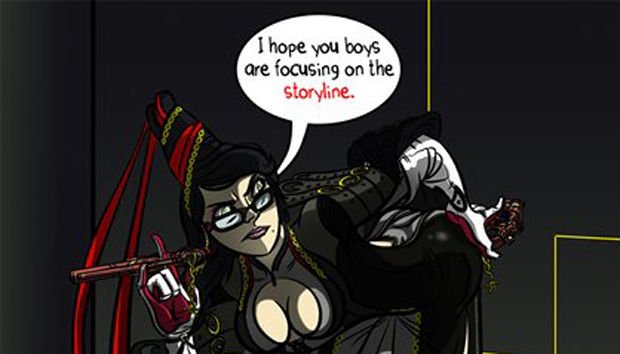 There are plenty of better ways to have a female video game character be sexual, playful, and rebellious, and it can be done without buying into the whole “sexy bad girl” stereotype. In fact, if done right, a sexual, self-assured female character can work to say that there is nothing “bad” about a women to be openly sexual. And more importantly, that their sexuality can truly be theirs,instead of belonging to their audience.

It does that in a lot of ways. For one, Jill is far from your stereotypical pin-up girl. She’s a little overweight, and she’s pretty much covered from head to toe. Still, I find her attractive, but not necessarily in a sexual way. She’s not attractive as an object, but as an subject.

Jill is on a mission to please herself and her love interest (the queen) and in doing so, she ends up getting impaled on spikes again and again. That may sound awful, but the thing about Jill is, she enjoys it, and she’s not ashamed of it. As a life long fan of games like Mega Man, Ghouls and Ghosts, and now Super Meat Boy and Bit.Trip RUNNER, I can relate with the way Jill finds pleasure in being hurt again and again by her game. In effect, Mighty Jill Off equates playing a super-hard platformer with having sex, and the message that both of things are not only OK, but are in fact totally awesome.

That’s my idea of an near-perfect female videogame character. She is attractive without being stereotypically sexy, she’s sexual without being exploitative, and most importantly, she doesn’t come off as a “good girl,” “bad girl,” or “good girl gone bad.” Instead, she’s her own person. Like her or not, you can’t say that you’ve ever seen a videogame character quite like her.

I’m not saying that it’s a bad thing for a female videogame character to be “girly.” I’m not saying that female characters should be more like male characters just for the sake of being “un-female,” or to  otherwise defy their true natures. Quite the opposite. What I want are female (and male) videogame characters that show me 100% of their true natures. Being weighed down or otherwise altered by attempts to live up to any preconceived concepts of gender only diminishes how well I get to know them.

Gender isn’t something to be ignored, but the idea of gender as an absolute set of rules for males and females to follow is limiting, boring, and just plain silly. Gender is an experience. We all experience being male, female, or something between, in our own ways. Our unique experiences are what make us interesting, and expressing those experiences as honestly as possible is what makes us real. Being honest usually means stepping off of the paths that we’ve been told we should walk down. That’s what I want from my videogame characters.

Before I go, I have to say that it was incredibly fun to write, animate, and do voices for Peach and Bayonetta in this video. I definitely have a little bit of both of them in my true nature, as I think a lot of us do. There both great characters; great icons in their own right. That said, I want to see more of who they really are than what their creators have shown us so far.

I also want more for them than I could effectively pull of in this video, but that’s a whole other issue.