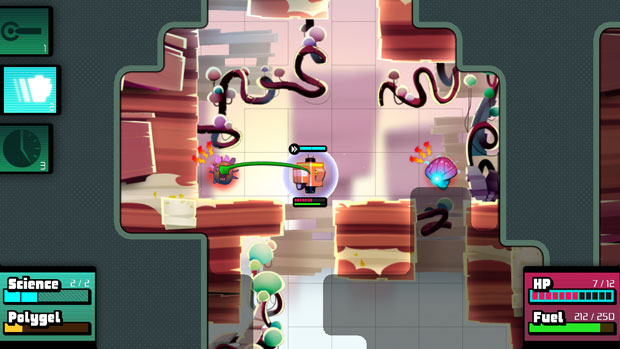 Funktronic Labs’ cool turn-based/real-time hybrid adventure game Nova-111 was originally slated for PC/Mac/Linux first, followed by consoles at a later date, but that’s no longer the case. The studio is partnering with Curve Digital to achieve a simultaneous 2015 release on those platforms as well as PlayStation 4, PlayStation Vita, Xbox One, and even Wii U (!!!).

I was curious about Nova-111 after reading Brett’s preview and made sure to set time aside to try it at PAX. It’s terrific! But, unfortunately, it’s one of those games that doesn’t entirely “click” until you’re playing it for yourself, learning the mechanics first hand. Even videos don’t do it justice.

Your character moves one tile at a time in a sort of turn-based fashion, as do some of the enemies, but there are also elements — like falling spikes, or explosions — that occur in real time. Very distinct feel. I was also a fan of the ability upgrades, because upgrades rock.

Anyway, that’s the game in a nutshell. Try to keep it on your radar — should be something special.