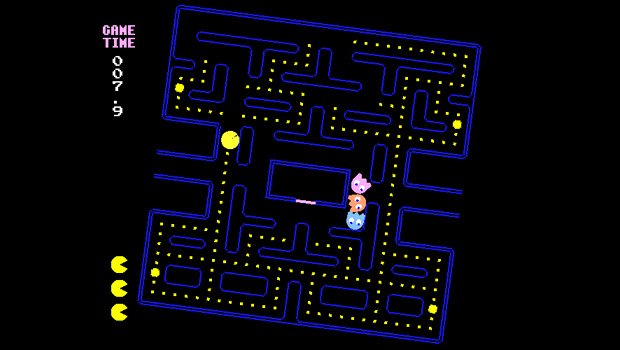 From the creator of Mari0

Let the headline swirl in your head a bit, then come back.

Indie studio Stabyourself.net has a knack for recreating classic 80s games pixel for pixel but with the application of modern physics for a wild new take on an old favorite. You might have played Not Tetris, an otherwise faithful copy of the Game Boy original except that now the bricks literally fall like bricks. Of course, you are probably more familiar with Mari0, in which the mustache man cheats his way through the Mushroom Kingdom with the aid of a portal gun.

Not Pacman (no hyphen) is likewise just like Pac-Man (see the hyphen?) only totally different. Instead of controlling Pac directly, you tilt the entire board with either a keyboard, mouse, gamepad, or steering wheel (dead serious!). In this version, the ghosts don’t move voluntarily — as you tilt your way to victory, you have to carefully avoid rolling one of the wayward specters into your yellow friend.

It definitely changes the way you play, even if it’s than a little frustrating and will probably give you bouts of nausea. But it’s free, so… yeah!

Not Pacman [Stabyourself.net via IndieGames]