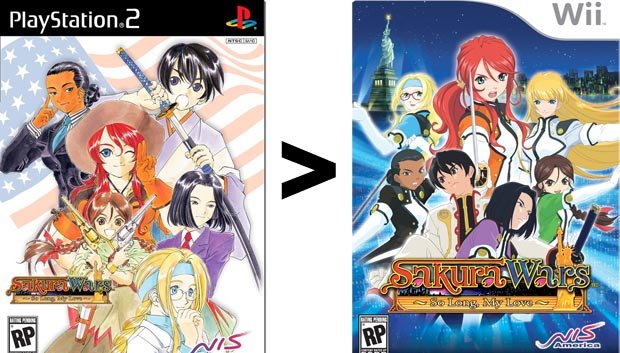 The other day I told you all that the patently awesome Sakura Wars: So Long, My Love for the PS2 and Wii would be arriving on store shelves in February, two-thousand-and-ten. I also told you that people afraid of cheesy English dubs would not need to worry, as all copies of the game would come on two discs: one with English voiceovers and one with the original Japanese voiceovers.

Apparently NIS-America is intent on making me A DIRTY LIAR, as the game’s confirmed release details retroactively make much of what I told you the other day utterly false.

The less-bad news first: Sakura Wars: So Long, My Love will not be coming in February, but instead on March 23rd, 2010. That’s OK, just a few weeks’ difference, and finally a hard date. However, the worse news is that Wii owners who don’t like the dub won’t be getting that second disc, the one with the Japanese voice acting. You can take comfort in the fact that the Wii version will launch at the considerably lower price point of $29.99, versus $39.99 for the PS2.

Which brings me to the better news, reserved for PS2 fans. The PS2 version, while more expensive, will come with that second Japanese-language disc alongside a bunch of extra goodies, including an art book and poster.

Frankly I’m glad that we’re getting a Sakura Wars game at all, much less a Wii port (since the original PS2 game came out before the Wii even existed), and that they haven’t cut out the language option entirely, but I’m a little saddened by the fact that I’m now a liar, destined to burn eternally in Malebolge, the 8th Circle of Hell. For disappointed Wii owners, all I can do for you now is offer the picture below, which is of Gemini Sunrise cosplaying as the girl from OneChanbara.

Which version will you be getting? Is ten bucks worth the loss of a language to you?

Filed under... #How many wolves have to die?