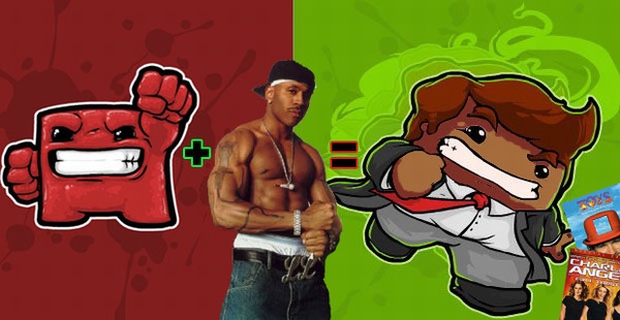 I may not post much news on the Destructoid front page, but I do, occasionally, have my moments. I’ve been known to investigate things. I once reported something. Every so often, when the sun is shining and the wind is blowing in just the right direction, I journalize.

This is one of those moments.

What initially began as a seemingly innocent e-mail conversation with Tommy Refenes, one third of the Super Meat Boy team, quickly turned downright newstastic once I started asking about the identities of the other, unannounced playable indie characters (thus far the only announced characters are Alien Hominid, Tim from Braid, Commander Video from Bit.Trip, and Gish from Gish).

What I found may shock you. It may move you. It may knock you out. You’ll have to hit the jump to find out exactly what I mean.

(On a slightly related note, I’ve scanned the entire Super Meat Boy promotional comic and included it in the gallery below. It’s quite fun.)

Just received the (super-cool) comics. I’ve got a question — I know the paint-by-numbers reveals Gish as a playable character, but is there any truth to the rumor (which I have just now made in my head-box) that the drawing of Meat Boy in the final panel of the Meat Boy Mini comic on Band Aid Girl’s Page of Fun is meant to suggest that Ogmo, from Matt Thorson’s Jumper series, might also be a playable character as well?

Perhaps it’s just a coincidence, but Meat Boy is drawn in such a way that he looks damn near identical to Ogmo.

Am I a secret-finding genius:

LL Cool J was pretty good in it.

I can confirm to you this: Ladies Love Cool J. Keep that in mind.

I want you to know that I took time out of my IGF crunch to get you this exclusive photo.