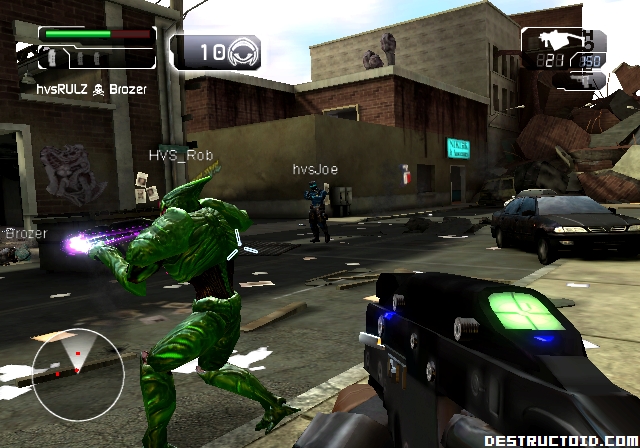 Last month we spoke with High Voltage, developers of the upcoming Wii first-person shooter The Conduit. There they were willing to talk about every aspect of the game except multiplayer, the very thing we wanted to know most about. Luckily, our new interview with High Voltage’s Chief Creative Officer Eric Nofsinger finally drops some details on how multiplayer is going to work on the Wii.

One of the things we’ve wondered about most is how voice communication will be handled in a online multiplayer session. The television-topping speaker/microphone WiiSpeak will handle the duties, Nofsinger reveals.

“It’s so cool, but it was a bear. It’s a neat device, but there were things we needed to sort out,” he says.

The main challenge was finding a way to overcome the chaos of 12 players talking at the same time. Their fix? Limit communication.

“So one of the things we incorporated is a system of inclusion, which allowed for the six players the closest to you are the ones you hear,” Nofsinger says. “It adds plausibility to it, realism that cuts down on some of that cross-chatter.”

Finally, it seems like Wii Friend Codes were unavoidable: “We do have Friend Codes. It was something we wanted to make as elegant as possible, but while still working within the boundaries of Nintendo,” he says. “I personally am not a fan of Friend Codes; however, I understand why they are there.”

Be sure to check out the rest of our interview on The Conduit’s multiplayer.