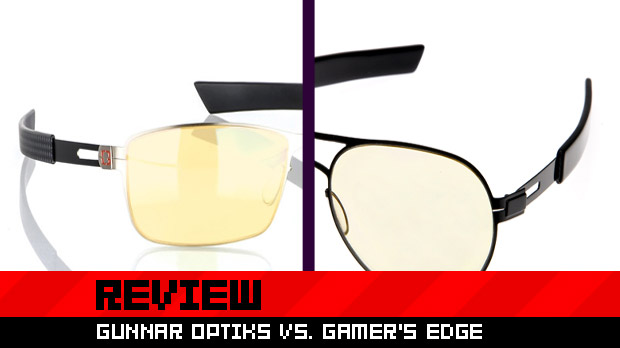 If you’re like me, you spend an almost excessive amount of time starring at a screen, be it computer or television. Gaming for long periods of time can strain your eyes, and I find as I get older, I’m more prone to headaches as I stare at a computer screen at work only to come home and unwind by…starring at a videogame on my TV.

Thankfully, resourceful companies like Gunnar Optiks Eyewear and Vision Concepts International have taken it upon themselves to aide those folks whose job it is to gaze unendingly upon computer and gaming screens by helping reduce eye fatigue and strain with several vision options.

The question is, with all the options available, which do you choose?

For this review, I was sent three pairs of glasses: VCI sent me their Aviator-style Gamer’s Edge glasses, and Gunnar was nice enough to send along two different styles: Wi-Five (one of their Advanced Computer Eyewear selections) and Vayper (above, from their Advanced Gaming Eyewear line). It’s important to note that both companies make several different types of eyewear for computer use, gaming, and even RealD 3D options, but these were the sets I was sent to review. All three pairs of glasses promised to ease eye strain and reduce fatigue while improving contrast and focus.

At first glance, however, the only thing I first noticed was that they were just pairs of amber-tinted specs. I didn’t quite understand how that was going to make me feel any better when using them, but I was willing to give them a shot. Once I put them on, however, I noticed a great deal of change.

For starters, I never realized how much I squint when looking at my TV or computer. All the years of blankly focusing on the bright images, colors, and movement (or sometimes, static white-and-gray spreadsheets) has strained my eyes more than I had known. The amber tint eased that immediately, and I was able to focus more clearly. Apparently, the amber tint helps block the “blue spectrum” found in color, which, according to the VCI website at least, is a key source of stress for your eyes.

I’d never heard that before, but it seemed to make sense as my eyes relaxed and images came into focus more clearly than I had seen before.

For comparison, I did notice that the Gunnar glasses had a bit of a darker tint than the Gamer’s Edge did. While this added a faint yellow hue to certain things, overall, it’s not very noticeable. However, this tint also seems to sharpen things a bit more, so when using the Gunnars, I was noticing details a bit crisper than with the Gamer’s Edge, but in all it was negligible. Your mileage may vary.

While the Vayper ($79.00) and Wi-Five (above, $99.00) from Gunnar are for gaming and computer use, respectively, I didn’t notice too much of a difference between them, save for the style of glasses themselves and the price. Gunnar Optiks offer the most options for style and user preference, with prices ranging from $79-$189 for variable frame types, and even offer prescription options for those in need of corrective lenses. I myself wear glasses already, and as they didn’t ask me for my prescription, I just got the non-blind-guy versions, but they fit well enough over my current frames (though I did look a bit foolish wearing two glasses at once).

The frames themselves are sturdy, and fit well, with the Wi-Five being the more snug of the two options here. They are both prone to fingerprinting on the lens very easily, but thankfully a cloth case which doubles as a dust cloth comes packaged within the sleek white box that flips open to display the specs. The designs are eye-catching and cool-looking, and the frames around the lenses didn’t get in the way of my vision when wearing them (even over my other glasses).

Gamer’s Edge (above), however, is more limited in its options as far as style of frame — only four are available on their site — and the other options from VCI seem to be targeted to a, shall we say older demographic. However at $39.99, it’s a much more inexpensive alternative to the Gunnars. Unfortunately, they don’t seem to offer any prescription options.

While the frames on the Gamer’s Edge glasses seemed to have a bit more give to them as far as flexibility goes, I never felt like they were going to break, and they actually seemed to fit the best out of the three pairs. While some may be put off as they are bit more lightweight and therefore feel slightly cheaper in quality, they are actually just as sturdy as the Gunnars and the flexibility may appeal to those with more ample-sized heads.

I was certainly surprised with how well everything looked through all three pairs, but more so I was impressed with how I felt. My eyes didn’t feel as strained, I was noticing more details in games than I had previously, and colors seemed to pop more while all images seemed sharper than ever. While each certainly have their pros and cons, most of the sticking points are negligible. It really boils down to how much you want to pay, and what style of frames you want. I never thought I’d endorse something like this, but both companies have made me a believer. I’m honestly impressed.