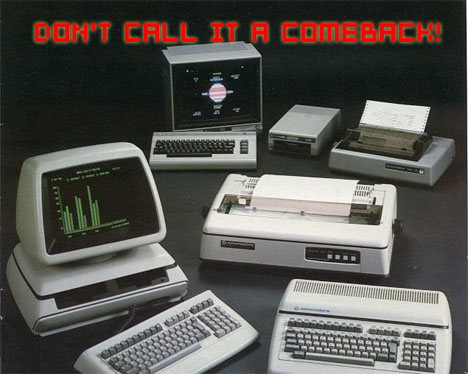 Remember the Commodore Computer, the definitive computer of the 1980’s? No? I can see it now: half of our readership is scratching their heads in confusion (or hitting up the wiki) while the rest are grinning as memories of Commando and Blue Max float through their heads.

Next week (March 15th) in Hannover, Germany, CeBIT 2007 will take place, and the Commodore computer will rise from the dead – relaunched as a gaming rig. According to Gamesdog, the new PC will be gaming focused and contain gaming hardware of the highest specifications.

“We are privileged and excited to bring the Commodore brand back to the gaming community and mark a new chapter in its history with this exceptional machine. We’re sure that it will deliver what gamers need and want.”

If they can even come close to the success of the C64, which sold around 17 million units, then Commodore would become the name in PC gaming.

For those who want to brush up on their Commodore history, check out this page that has Java emulation of many Commodore 64 classics, playable right from your browser.