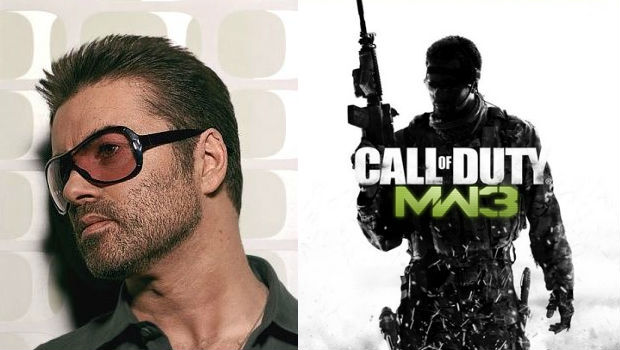 WUT? WARNING: May cause nausea, dizziness and vomiting.

Well I guess it would be nice
If I could show these comments
I know not everybody
Has got a comment like you.

[Many thanks go to Handy for his invaluable contributions to this week’s Comments of the Week.]

From Comments of the week: P1 touch P1 to start edition 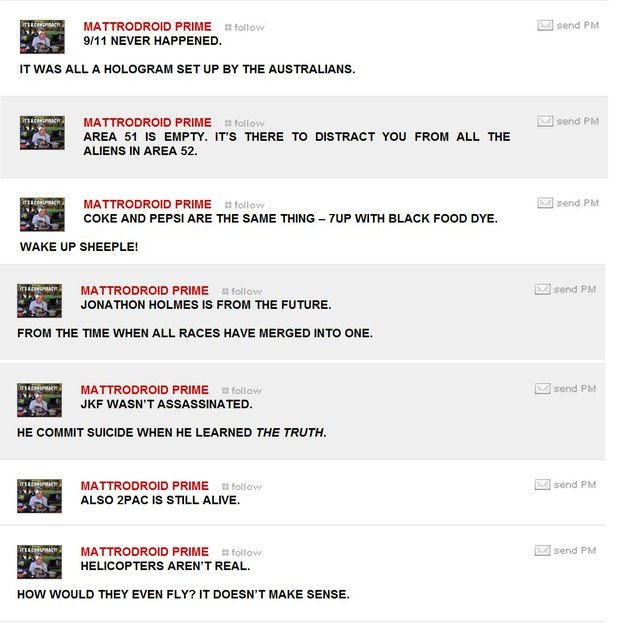 From Criticizing the 3DS out of love, not hate

Sean: These were the last reports of mattrodroid after he split into two evolutionary forms. These get an honorary truth entry, because it was something mattrodroid v1 would never have got. He will sort of be missed.

From: REPORT: You’re not owed any UMvC3 character!

Handy: It is kind of sad that the week that Phoenix Wright and Frank West star in a Capcom fighter is met with such dismissal because of Capcom’s recent decisions. If they’re truly guilty of one thing this week it’s terrible timing.

From Origin: Pay us to let you wait in line for a digital game

Sean: I know a lot of people have said “but EA are doing this to force people to use Origin!” Well, yes, it is doing that, but holding games ransom is a risky move, especially considering how popular Steam is.

Even Apple know better than to limit their products to the Apple store. EA should be getting their products on every service going, and make Origin a distribution platform worth getting on by offering a fantastic service, or offering new and exciting social features to compete with Steam. Their current strategy threatens to upset as many consumers as it will attract.

From: Digital Distribution: Publishers are poisoning the well

From Street Fighter X Tekken is a trap with new characters

Sean: Seems fitting that (s)he would have a cockney accent, considering their genitalia.

From Kirby Wii to be called Kirby Returns to Dreamland 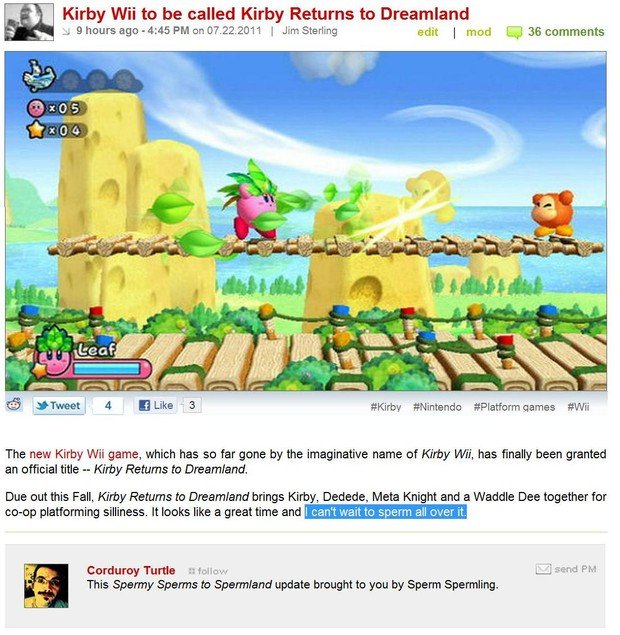 Sean: This looks like a job for… Super Sperm? 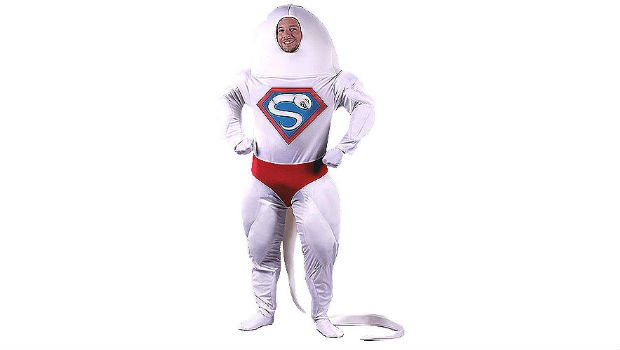 From Social sim shows you what teenage girls are really like 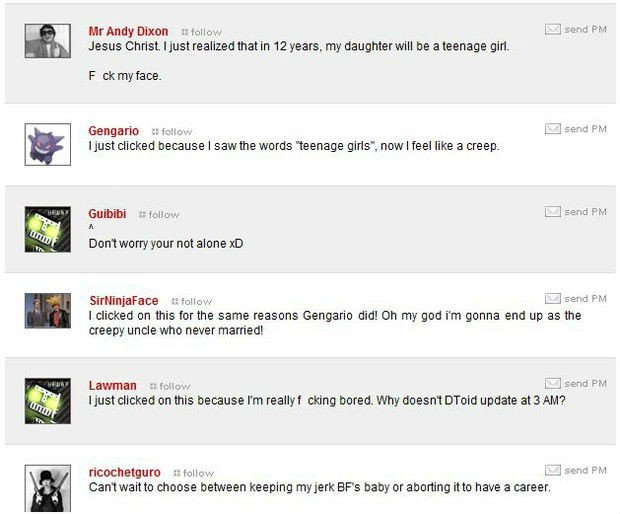 Handy: If this game is really an accurate portrayal of teenage girls’ life then you’ll get an instant Game Over if you show an interest in teenage me.

Sean: I think Handy is implying that he didn’t have much romantic success with girls during his teenage years, but I’m just going to pretend he murdered them, because it implies that too. Spicy!

From Who the hell are you?! Pictures thread 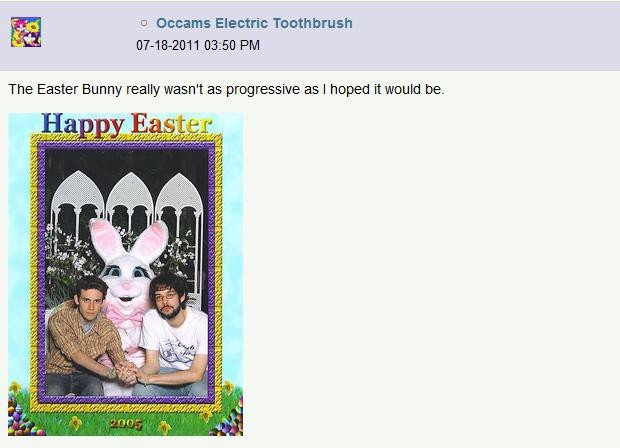 Sean: You should have told the Easter Bunny to be more eggcepting.

From Video Game Name For My Kid

Sean: Seriously, go looking for a fridge magnet with that name on it. You won’t find one. 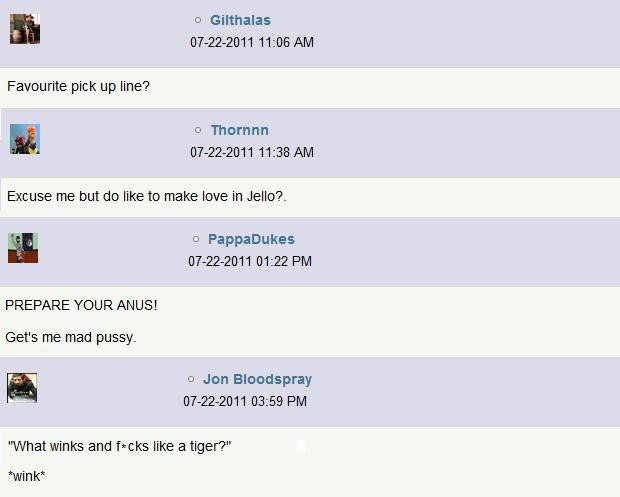 Sean: My best pickup line? I get my rag and say “Smell this and tell me it doesn’t smell just like chloroform.”

From The Question: You going to buy Ultimate Marvel vs Capcom 3? 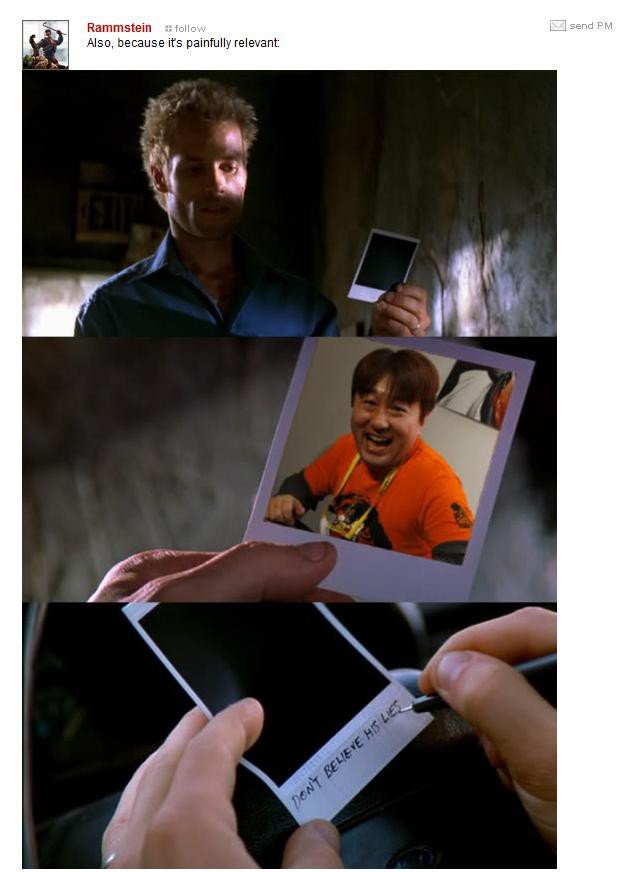 Sean: If you have not watched Memento yet. Stop whatever you are doing and go rent it out and watch it now. Even if you are just getting ready to get married, just explain to the vicar you haven’t seen that movie yet. If they have any sense at all, they will understand.

Handy: Rammstein can be, to heavily sugarcoat it, a Negative Nancy, but damn if this didn’t make me laugh.

From REPORT: You’re not ‘owed’ any UMvC3 character

Sean: Where did you file them Isay Isay? Your KPIs are way down and Johnson on Floor 2 has been on my case about them since May. I’m up for disciplinary!

From: ANYTHING TO DO WITH CAPCOM.

Handy: To be honest this stuff started off in the WUT section, but eventually came back in on itself and became funny to me. I guess it’s up to you if you want to laugh with it or at it, then everybody’s happy!

From Downloadables: A hoard of the game

Sean: Damn dragons, pushing their dragon agenda. It’s all pro-firelighters this and anti-extinguishers that. Makes me sick.

From legends 3 was nothing special guys come on guys 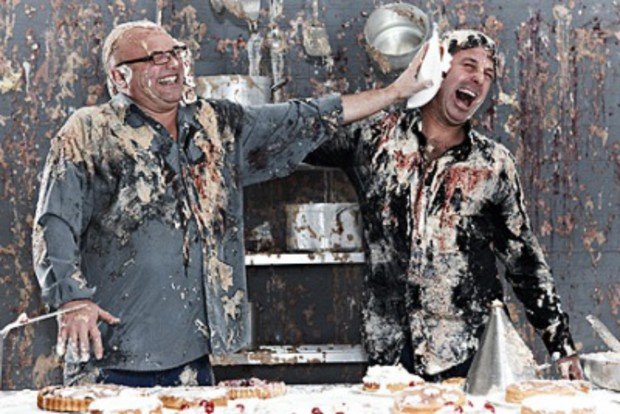 From Talia Al Ghul to appear in Batman: Arkham City

From: REPORT: You’re not owed any UMvC3 character!

Handy: I hereby decree that this gif must replace all “In B4 shitstorm, let me get mah popcorn.” comments from now on.

From Digital Distribution: Publishers are poisoning the well

From: Bethesda: Forced multiplayer a waste of time

From Epic Games: Bulletstorm ‘didn’t make money for us’

Sean: Surprised they’re still around? You do know they made quite a bit of money from the Gears of War series, and the hundreds of games that use their ubiquitous Unreal Engine. Does that help give you some clues to go on?

Handy: It takes a special kind of person to see the misspelling of a foreign name as a reason to question someone’s journalistic credibility and start demanding RESPECT *bangs fist on podium*. The same type of person who interrupts an interesting discussion to point out “It’s pronounced Hi-deo Kojima not Hide-o Koijma, GAWD”.

Sean: Well, I don’t remember the time where Freddy dressed as Marilyn Monroe to seduce his victims… but it does remind me that I would play the hell out of a Looney Tunes fighting game.

From SDCC: Cosplayer brings a real AR-15 rifle to Comic-con

Sean: If only you had written “Ethan Thomas” rather than “Gordon”, you’d have had a witty videogame-related comment there.

Sean: It might be worth checking to see if The Snipes is on Twitter, because there’s a slim chance he may be up for some of that action.

Applying logic to Freddy Krueger is one thing in and of itself, but applying Freddy Krueger logic to a game, a game where all the characters murder each other horribly, but still somehow got to eight entries without drastically changing the cast each time. A game where character names are based on Prince song puns and developers names spelled backwards. A game where the sound designer pops up and sings “TOASTY” if you uppercut someone. A game where four armed lady-beasts wear Borat style g-strings and….look, I could be here all day, just roll with it is what I’m saying.

From I want to skullf*ck this Battlefield 3 multiplayer video 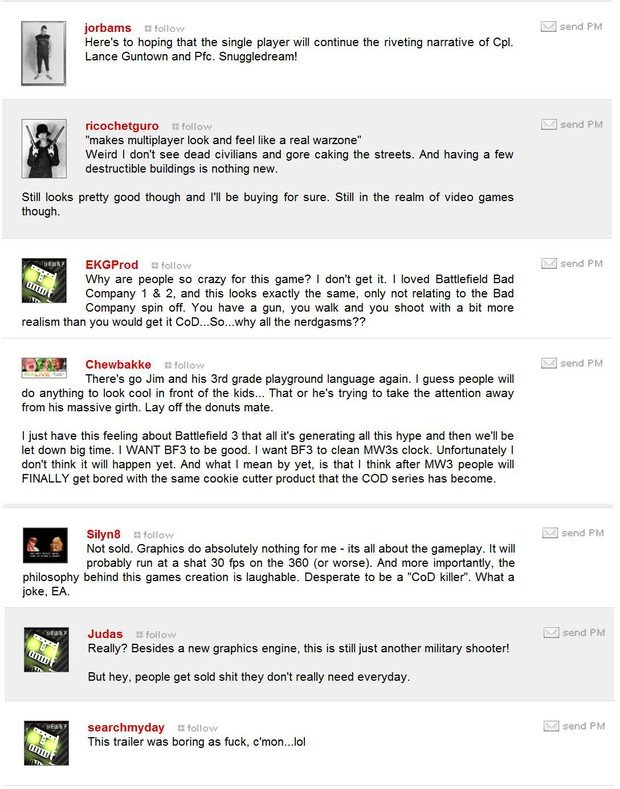 Sean: Cynicism! If only we could run our homes off it. I could plug the internet in, and I’d never have to pay for electricity again.

Hope you enjoyed the show, repeat performances are every Sunday at 12:30. Stay safe out there and don’t look up if you see pigeon crap on your car.