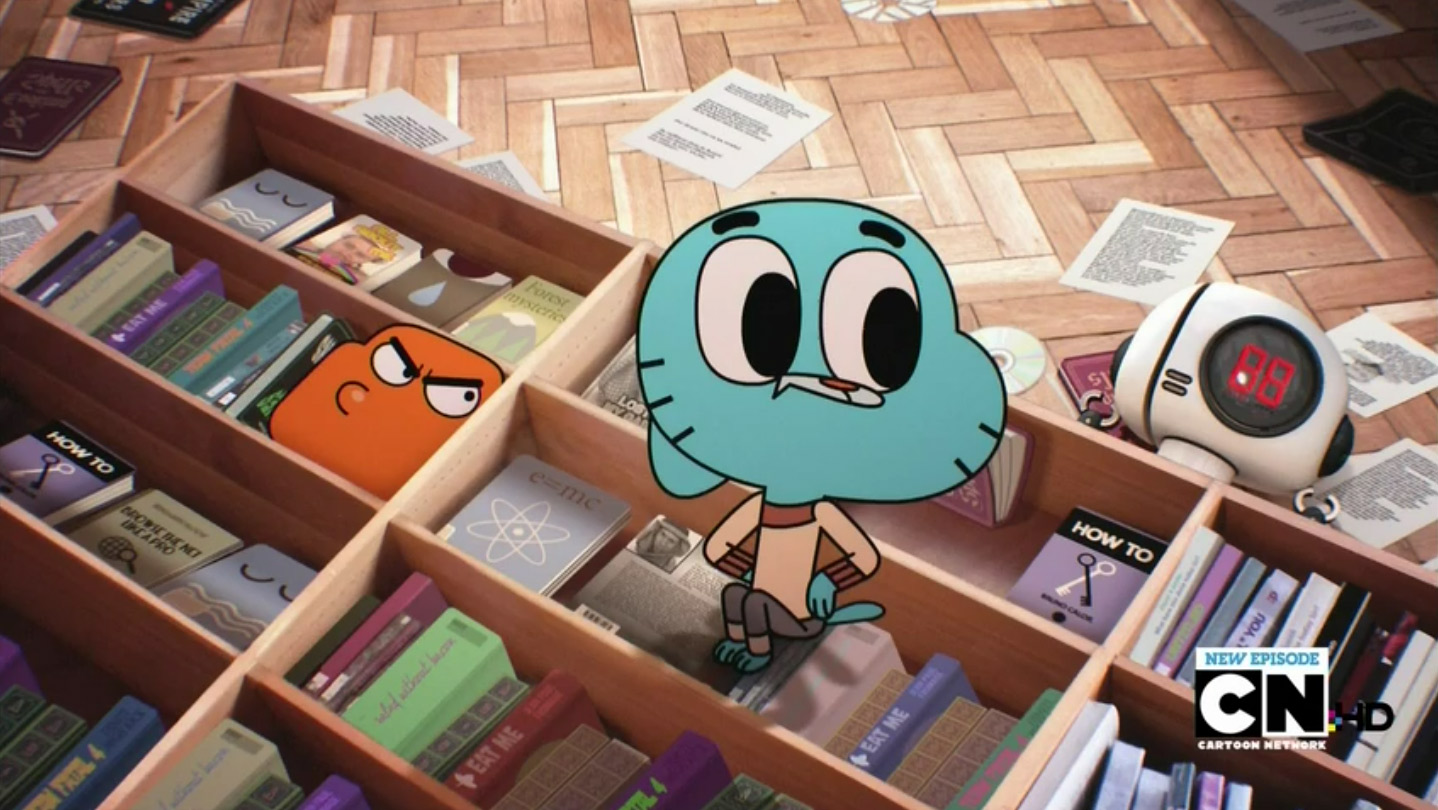 Yo, Dreamweaver’s in the house, so you all know what that means!

What the f- PUT YOUR PANTS BACK ON, NO ONE WANTS TO SEE THAT! (Why aren’t the girls taking their clothes off?)

No, it’s time for Comments of the Week, you darn perverts! You know, the weekly community showcase where fellow members, such as yourselves, can have their turn in the spotlight simply by making a funny in the comment sections? Man, you should know the drill by now! I mean, we only did this every week as a service to those who either couldn’t be here to see the comments themselves, or simply want to enjoy them a second time around. I bet all the lust made you forget that, as always, comments are placed into three categories:

TRUTH: it takes 12 pounds of milk to make just one gallon of ice cream.

LOL: it takes one teaspoon of semen to get a girl pregnant.

WUT?: what could you do with 12 pounds of semen?

If you haven’t seen last week’s edition, then you should get up on that! I mean, you don’t have to, since this isn’t like a soap opera where missing a single episode means you have no clue what the hell’s going on… but you should, because I don’t like you and you need to vacate the premises.

From Review: Mighty No. 9 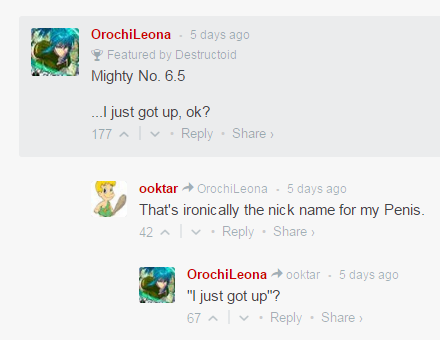 Dreamweaver: Don’t look at me, I’m just trying to figure out why the Penis is capitalized.

From Zelda: Breath of the Wild Hylian text doesn’t hide any cool secrets 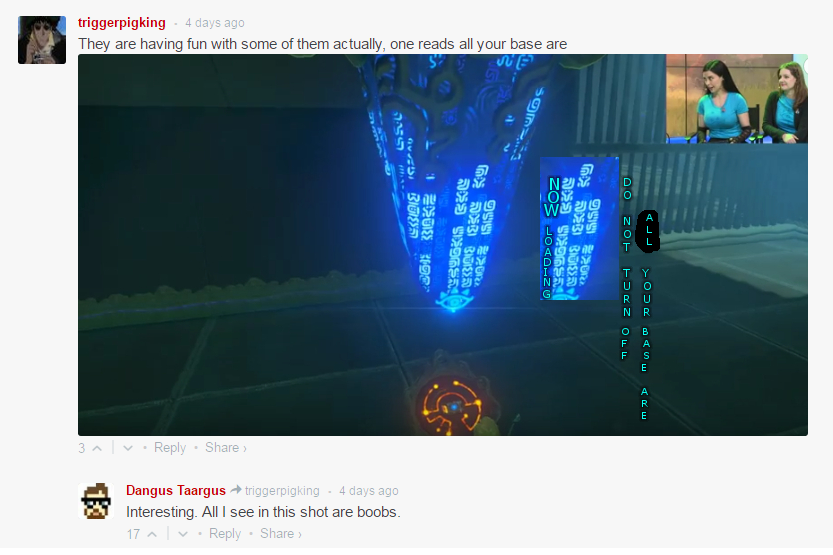 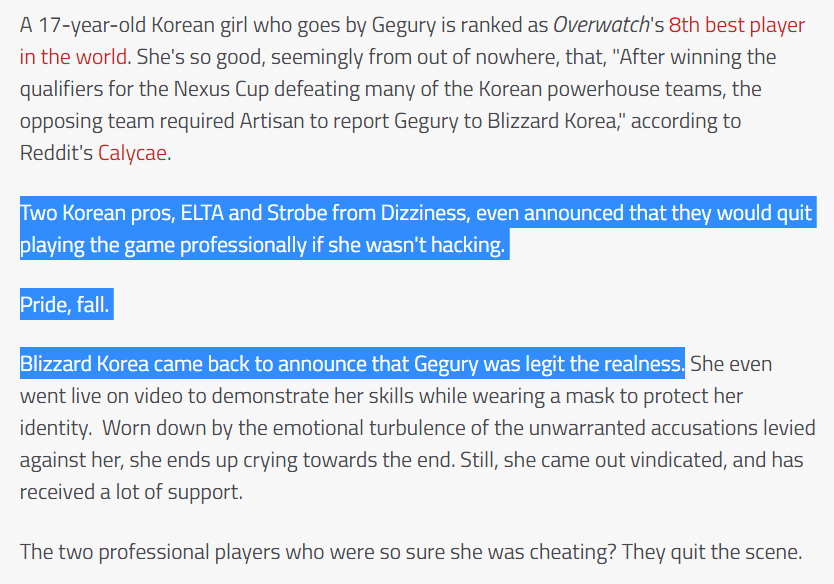 Dreamweaver: What I’ll say when I lose my virginity.

Dreamweaver: “Both players a tad scared. They were not prepared. She outplayed like a beast.” 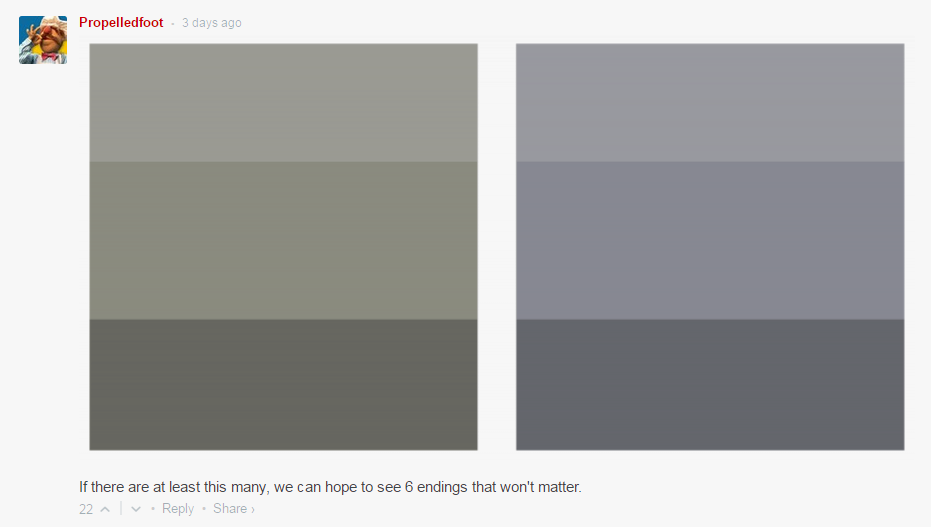 Dreamweaver: This looks like a depressing version of Six Flags to me.

Dreamweaver: Don’t be like that! You could become a sperm donor, or a “milk man.” #SpreadtheShade

Dreamweaver: You’re not sorry. Your avatar gives you away.

From Wilson’s Heart was my biggest surprise of E3

Dreamweaver: I would’ve also accepted Steve Urkel from Family Matters. Bonus points if it’s revealed at the very end when he says “did I do that?”

Dreamweaver: If only such a number exists, like a 6 or a 9…

From Kick your weekend off with this PlayStation Flash Sale

Dreamweaver: “I hated myself for this, just so you know.”

That’s what my sister says after sleeping with me.

Dreamweaver: I claim you in the name of France.

Dreamweaver: Get out, Gaj.

From Someone allegedly tried to steal the Zelda: Breath of the Wild E3 demo

Dreamweaver: And security officers, but no one ever gives THEM credit. 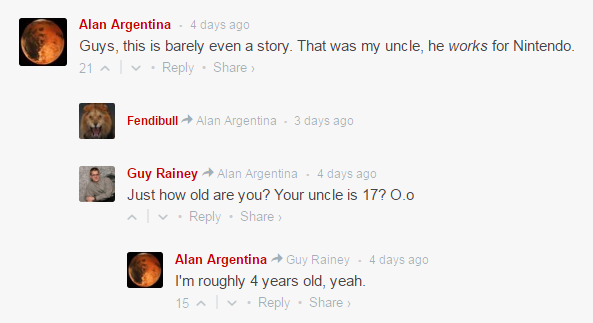 Dreamweaver: Didn’t think I’d have to dig this one out of the vault so soon.

Dreamweaver: Yo dawg, I heard you like featuring comments, so I featured my comment that was featured by someone else. Featured.

From Comcept is dealing with Mighty No. 9’s launch woes

From Pokemon Sun & Moon is getting a special 3DS XL, and I want it

Dreamweaver: Only Pokémon nerds will get this one!

From Wow, the Xbox One S is bigger than I expected

Dreamweaver: Nothing says “I love being with you” like checking your Tweets during sex.

Dreamweaver: This deal is getting worse all the time. 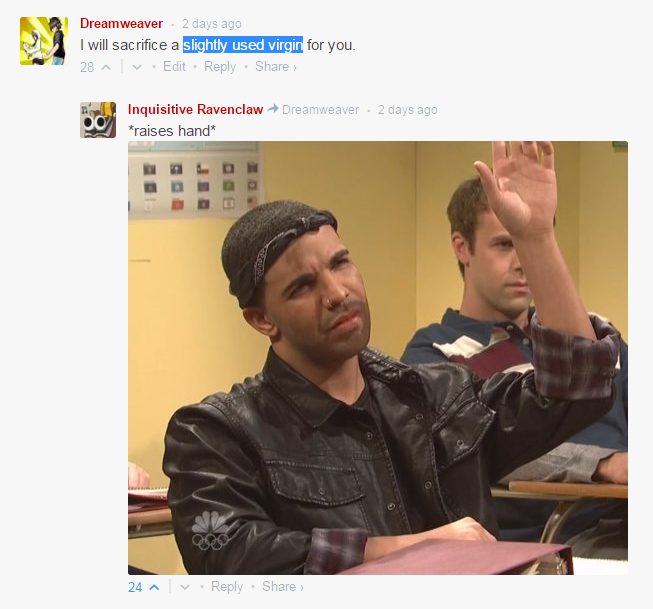 Dreamweaver: Honestly, this was my favorite reply from Comment of the Week this week.

Shame it had to happen in a sad article. You all will be missed. 🙁

Especially you. You know who you are.

From Site news: You can block whole user accounts in comments now 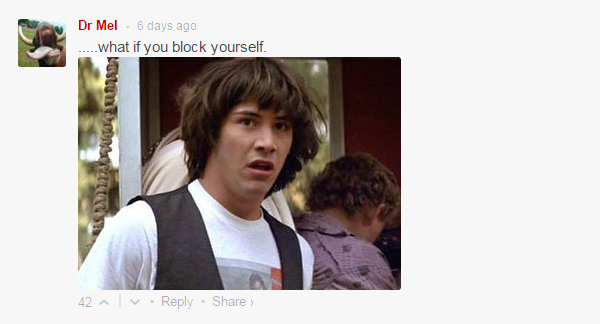 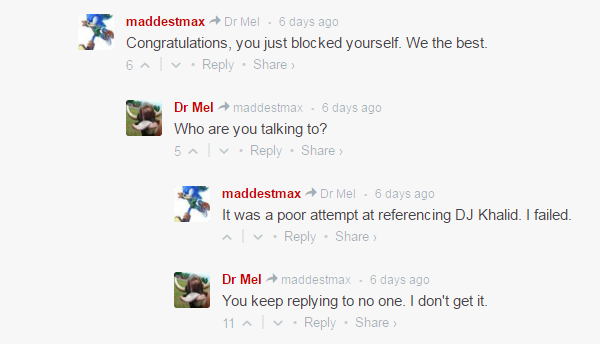 Dreamweaver: I read that as “what if you cock yourself” but since my penis was too short I didn’t answer.

Dreamweaver: Psh, yeah right. Next you’ll tell me it was printed on paper. 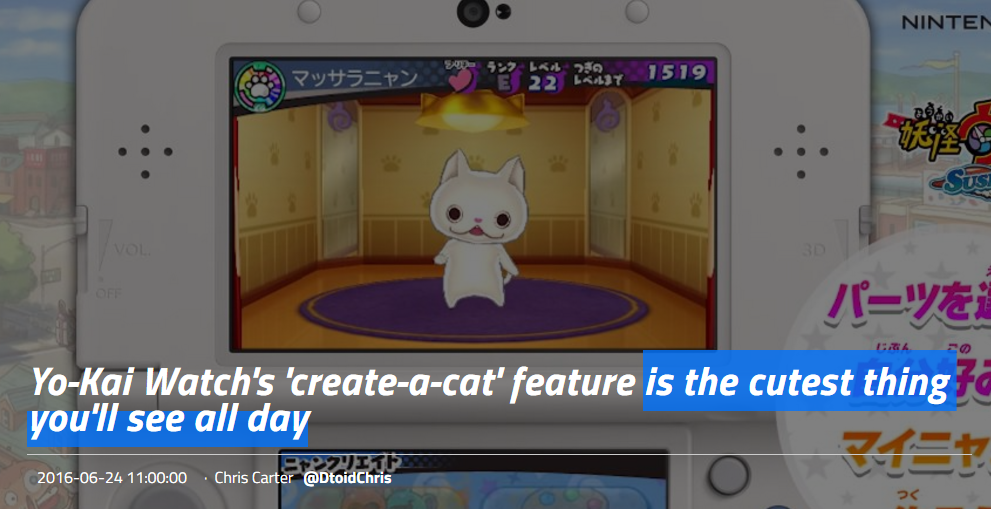 From Hey, look, a Vita game got announced! 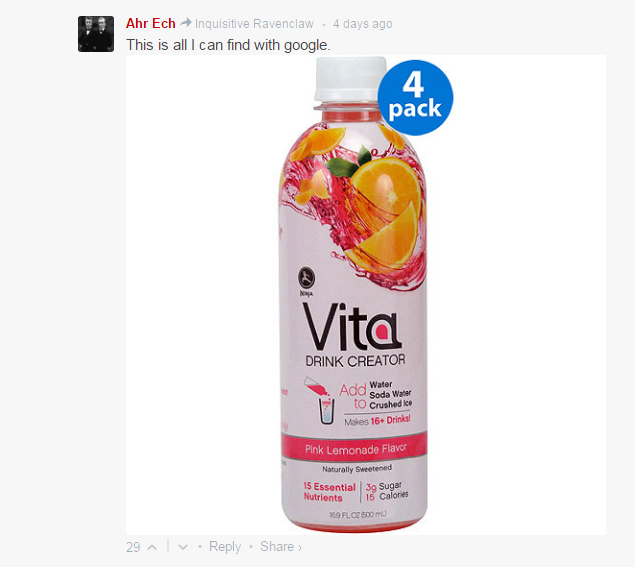 Dreamweaver: Where are the buttons? Don’t tell me it’s motion controls!

From Damn, we missed out on a Disney Infinity Benedict Cumberbatch toy

Dreamweaver: Maybe you need another beer.

From Sony loses another legal battle, this time over PS3 Linux dispute

Dreamweaver: As a robot, it took “break a leg” too literally.

Dreamweaver: They’re not!? But… but I made friendship cupcakes! 🙁 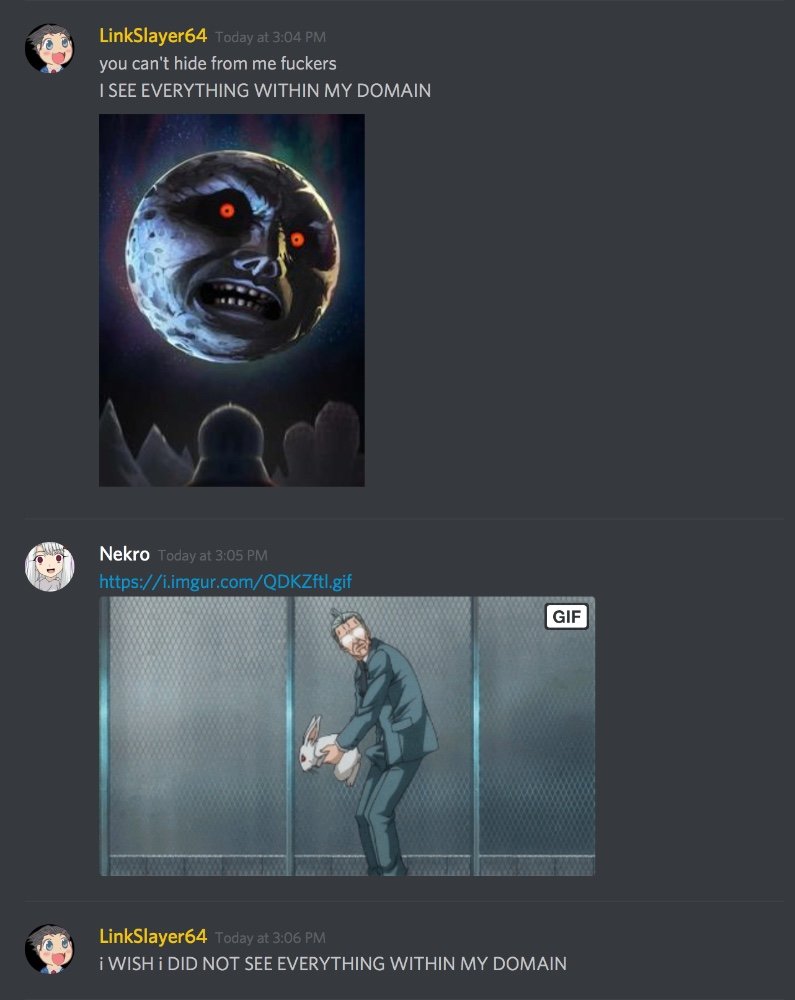 From Mighty No. 9’s nearly four-hour-long credits last longer than the game

Dreamweaver: Do people have, like, a stopwatch in case this happens?

And that’s it for this edition! I hope you had a good time, and I hope to see you again next week. As always, don’t forget to comment about your favorite comments that made it in, or let us know about the ones that didn’t! And Discord users, don’t be afraid to message me about something you saw! I’m not ALWAYS in Quicktoid! 😛

Filed under... #comments of the week#Notable#Promoted stories